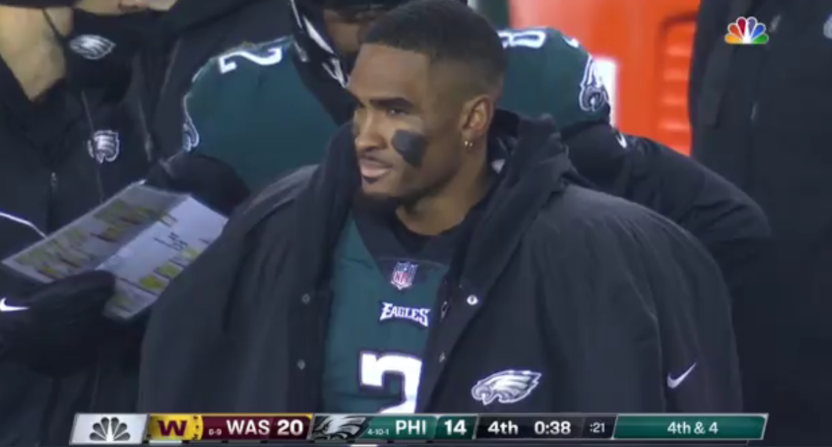 The race to see which below-.500 team would limp into first place in the NFC East had a remarkable ending Sunday night. After the New York Giants beat the Dallas Cowboys (with help from a late interception and a fumble that they recovered themselves) Sunday morning to improve to 6-10, that meant the 6-9 Washington Football Team would need at least a tie in the Sunday night game against the 4-10-1 Philadelphia Eagles to avoid a three-way tie for the division between Washington, Dallas and New York (which the Giants would win based on their 3-1 record in games between those teams to Washington’s 2-2 and the Cowboys’ 1-3). And while Washington came out with a 20-14 win in the end to improve to 7-9 and claim the division title and a playoff berth , that wasn’t an easy victory. In fact, it came with a massive helping of controversy after Eagles’ head coach Doug Pederson pulled a seemingly-uninjured Jalen Hurts.

Pederson pulled Hurts (who won the Eagles’ starting job in early December over the struggling Carson Wentz, and showed lots of promise since then) at the start of the fourth quarter, with Washington up 17-14. (And they were only still up thanks to Pederson pulling a doomed fourth down gamble in the third quarter instead of kicking a field goal to tie.) Pederson replaced Hurts with Nate Sudfeld, who had only played in three regular-season games (all in 2017 and 2018 with the Eagles) following his sixth-round draft selection by Washington in 2016. Sudfeld was inactive for all of Washington’s games in 2016 and was waived by that team in September 2017.

Sudfeld joined the Eagles’ practice squad after that, was activated in November, and actually received significant playing time in Philadelphia’s meaningless regular-season finale that season (they’d already clinched the division title; he completed 19 of 23 passes for 134 yards in a 6-0 loss to Dallas). But he barely played in the 2018 season, recording just one completion on two attempts across two games, and he hasn’t recorded a regular-season stat since then. And this year, he hadn’t even dressed since Week 1, and was usually listed as the third quarterback behind Hurts and Carson Wentz. So putting him in in a close game with playoff implications on the line (albeit for Washington and the Giants, not the Eagles themselves) sparked a lot of discussion about if Philadelphia was deliberately throwing the game to get a better draft position, and it also prompted a lot of annoyance from Giants’ players who needed the Eagles to win:

I think the eagles just hate us more than washington. That’s only thing that could make sense right?

This is why we don’t like the Eagles. https://t.co/Efe7kEPtES

And once Hurts went out, Philadelphia did next to nothing offensively, with their drives ending in an interception, a fumble, a punt, and then the end of the fourth quarter (which came on a short pass Sudfeld threw down six, which was nowhere near the end zone and had no chance of resulting in a touchdown). So that move definitely made this game less compelling. And it even sparked some on-broadcast derision from play-by-play announcer Al Michaels and analyst Cris Collinsworth. And it created some post-game questions for Pederson:

Says he was coaching to win this game – logical next question would be why he thought Nate Sudfeld gave them a better chance to win?

Here’s some of that press conference:

Yes, from a pure incentive standpoint, it made some sense for the Eagles to lose this game. They finish with a 4-11-1 record, and that has them drafting sixth overall:

With a win, the Eagles would have finished 5-10-1, putting them ahead of the 5-11 Lions, Panthers and Broncos (and thus, behind them in draft order). So the NFL’s incentives certainly do reward not winning, especially as they don’t even have a lottery for the bottom teams (unlike the NBA and NHL) to make it less certain that losing will reward you. But teams deliberately making moves to not win a game is a tough line to walk for a league that’s supposedly so concerned with the integrity of the game.

And while this is far from the only questionable move we’ve seen over the years (and there have been a lot at the bottom this year in particular, with the chance to draft star QB Trevor Lawrence first overall potentially there), it was a pretty blatant one. And it was a really blatant one to see in a showcase primetime game. (Granted, this NFC East game only wound up there because it was guaranteed to have playoff implications and it involved big markets, but still.) It will be interesting to see if anyone at the league offers any response to Pederson’s move here.