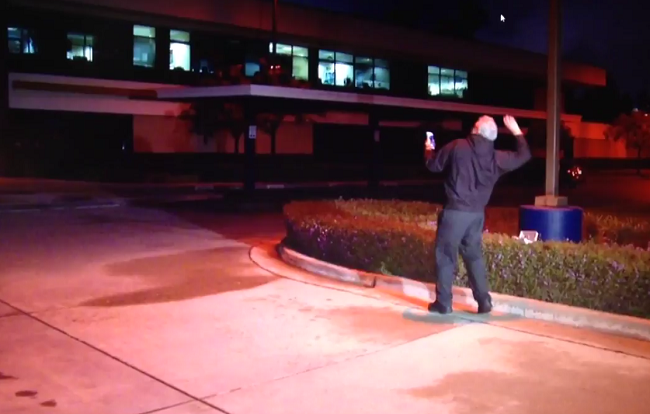 Everyone processes grief differently, and that includes sports fans. When a beloved player leaves in free agency, that’s cause for jersey burnings, or at the very least outright anger.

But when your whole damn team leaves? How would you even begin to cope with that?

The Chargers’ move to Los Angeles has caused this man, Twitter user @sonsofArkham23 (Twitter bio: “Writer, Imagineer, Creator of will be named later tv show. Prankster, Entrepreneur. Inventor of The Sharter http://thesharter.com”),  to ponder that very question. His answer? You go ahead and Periscope yourself egging the Chargers’ facility. Let’s go to the video:

Someone upset at #Chargers news to move to Los Angeles Periscoped themselves throwing eggs at team's building: https://t.co/Plgj5q5L6I

The actual egging takes place at about the 7 minute mark, though the buildup is generally worth it as well, including an interview with the local news about how he’s going to throw eggs. A few choice excerpts, in chronological order:

“Fuck LA. Fuck Dean Spanos. I might go to jail for this. The news is here too.”

“You know what might happen though? I’m going to throw these eggs, I’m going to hit my target, and these motherfuckers are going to want to sign me.”

“So, okay guys, I’m here right now, and the news is going to interview me real quick, so just bear with me.”

(proceeds to throw eggs, showing off a pretty fantastic arm, all things considered)

“So, you guys can send it to the Chargers…that’s how I feel about the stab in the back. But this is bullshit.”

This guy is awesome, and it’s hard to imagine there’s a jury in San Diego that would convict him. Frankly more eggs should be thrown, but hey, we are sort of living in a society here, after all.

This guy could probably get a Kickstarter for his legal fees or fines filled up in no time at all, though.

Here’s a backup video, in case that Periscope gets taken down. Though based on his attitude throughout, I don’t think he’s really all that concerned about any potential consequences. And hey, this might help drive some traffic to his site of TheSharter.com, home of “The world’s wettest fart-maker!”