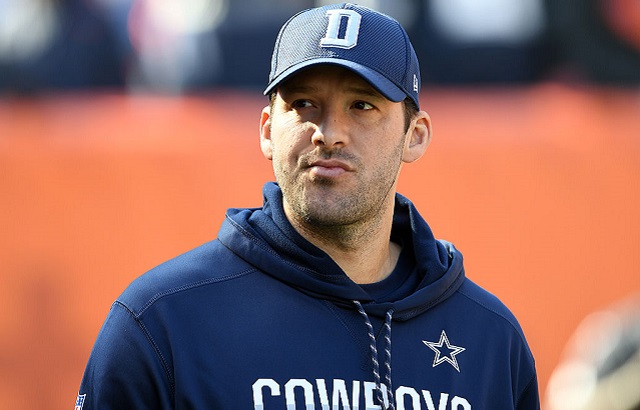 The Tony Romo era is effectively over in Dallas. That’s been apparent for several weeks now, even before the Cowboys franchise quarterback for the last decade returned from a preseason back injury.

As Dallas kept piling up wins with Dak Prescott under center, there was the occasional half-hearted effort from the media to make it seem like Romo might sweep back in and reassume the starting role when he was physically able. The most traction that got was a few rumblings following Dallas’ 29-23 victory over Philadelphia in Week 8, in which Prescott was shaky for most of the game before rallying the team to score the last 16 points of the game to win in overtime.

Two more wins, each on stellar performances by Prescott, have put that to bed. Winning a dramatic shootout on the road in Pittsburgh on Sunday, beating a two-time Super Bowl winning quarterback, improving to an NFL-best 8-1 with the second half of the season underway. Those are the kind of things that quell the lingering traces of debate. There’s nothing that says a team can’t win a championship with a volatile quarterback situation late in the year — Denver did it just last season. It’s still better to get things settled sooner rather than later, especially when you’re talking about the Cowboys, a franchise that faces more potential media hysteria than any outside of New York.

Immediately following the win last Sunday, Jerry Jones announced that Prescott would start the Week 11 game against the Ravens, with Romo available for the first time this season as backup. Prescott has done enough to earn the starting job the rest of the season. The way NFL culture works, though, with Romo available on the sidelines, a few iffy games by Prescott could get the chatter started right back up.

So on Tuesday, Romo addressed the media with a five-minute prepared statement and fielded no questions. The point was to establish Prescott as the unquestioned starter for the remainder of the season. Clearly unnerved, Romo’s usually breezy delivery was hardened detailing his thoughts of the past few months and how he fears time is running out even if his competitive nature hasn’t shown signs of diminishing. Though the emotion was raw, it was clear Romo meant to stress that he has Dak’s back, the same way others supported him when he first took over the starting job.

Perhaps noting the importance of overcoming inner tumult isn’t the most novel concept in the world. It does give us an idea of what Romo has gone through psychologically to get to this point, to make a mature gesture that he certainly didn’t have to make.

As someone who has delighted in Romo’s failures over the years, it has me questioning why. I mean, I know why to some extent and I imagine it’s the same reason a lot of people have: He’s been the quarterback of the Dallas Cowboys, an overexposed team with inescapable fans and an owner loathsome even by NFL owner standards. Yet still there was enmity reserved for Romo as though he he had done awful things on par with, say, a Greg Hardy.

Another @TonyRomo classic is when he spun away from @JJWatt and hit @TerranceWill2 for the TD bomb pic.twitter.com/I81D831ndv

And what exactly has Romo done wrong in his personal life over the years? He’s caught endless grief for dating Jessica Simpson and Carrie Underwood, for doing a bevy of commercials, for supposedly being a fraud for not winning a championship. Romo has never shed the scorn that used to attach itself to LeBron James, who nowadays is about as revered a figure as there is in the NBA. I won’t claim Romo is the generational talent that LeBron is, but he is very, very good and deserves credit.

There is some murkiness in citing that he’s the franchise leader in passing stats like yards and touchdowns because Romo played in a generation where passing stats were easier to come by. That said, if you go by Pro Football Reference’s player valuing metrics, he’s the third-highest rated quarterback in franchise history, behind Troy Aikman and Roger Staubach. There should be no shame in that, considering that would qualify as the best for many other franchises in the NFL. That’s higher than Don Meredith, who took Dallas to two Super Bowls.

The narrative that Romo is a choker has been overblown for years now, which is especially evident when you note that he has 25 career fourth-quarter comebacks. Romo had five alone in 2014, his last full season, when the Cowboys went 12-4, got to the second round of the playoffs and nearly won on the road in Green Bay in the divisional round.

The most common comparison to what is playing out between Romo and Prescott is Tom Brady and Drew Bledsoe, which is amusing because it was also Bledsoe who Romo later replaced in Dallas. Bledsoe has weighed in on this situation, praising Romo’s handling of it. Even after being replaced as starter, Bledsoe still played an instrumental part in that 2001 Patriots title run. When Tom Brady went down in the AFC Championship in Pittsburgh, Bledsoe played well enough for the Pats to steal a win with two special teams touchdowns and advance to the Super Bowl.

There’s no way of knowing whether there will be a similar moment for Romo later this season, though given the brutal nature of the NFL, even minor injuries are never far away. Whether that happens or not, it’s safe to assume Romo will be elsewhere after this season, starting for a franchise that thinks it has enough talent to make a playoff run with a stopgap starter rather than tank and hope a future franchise quarterback materializes in the draft.

By then, there might be a little more public sympathy for Romo. It’s also fair to reconsider his time with Dallas. If Prescott were to win a championship with the Cowboys, especially right away, it would only further cement the narrative that Romo was the downfall of those Cowboys teams that fell short in the postseason. Not that he doesn’t share any blame, but it’s an incredibly simplistic and unfair reading. Tony Romo is a good player and, by all accounts, a decent person. And we’ve been awful to him.