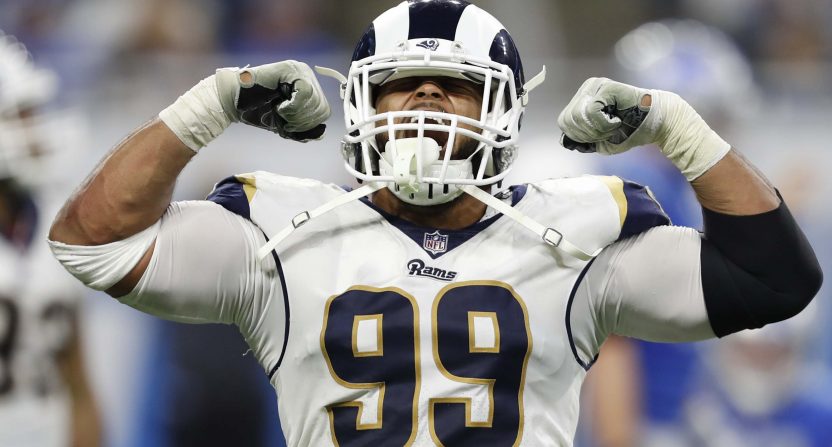 Week 14 of the 2018 NFL regular season is here. You might be entering the weekend with your own preferences regarding which games to focus on, and which to place on the backburner.

1. Rams at Bears (Sunday night, NBC): Pray that Mitchell Trubisky plays here, because if he does it could be one of the best games of the year. Chicago has a really good shot at home.

2. Vikings at Seahawks (Monday night, ESPN): Seattle is rolling, Minnesota has Super Bowl talent as well, and both teams are fighting for their lives. You just know this’ll go down to the wire to wrap up the week.

3. Ravens at Chiefs (Sunday, 1 p.m. ET, CBS): This is the excuse you need to check out Lamar Jackson, who’s been victorious in his first three starts with the Ravens. Watch for Baltimore to hang around with a top seed that is facing turmoil.

4. Colts at Texans (Sunday, 1 p.m. ET, CBS): They went to overtime in their first meeting, and both teams have improved immensely since then. An Indy win would be huge, but a Texans win would also make things interesting in the race for the top seed in the AFC.

5. Eagles at Cowboys (Sunday, 4 p.m. ET, FOX): This very likely determines who gets to lose to the Seahawks on wild-card weekend.

6. Saints at Buccaneers (Sunday, 1 p.m. ET, FOX): Tampa Bay was the only team that had beaten New Orleans before the Cowboys did so in Week 12. At home, it’s entirely possible the suddenly defensively-respectable and offensively-disciplined Bucs put up a fight here.

7. Panthers at Browns (Sunday, 1 p.m. ET, FOX): The Browns are a draw right now, while the Panthers are trying to save their season. This should be close, and it wouldn’t be surprising if it contained some fourth-quarter fireworks.

8. Patriots at Dolphins (Sunday, 1 p.m. ET, CBS): New England has lost four of its last five games in South Florida, so I’d keep tabs on this one.

9. Falcons at Packers (Sunday, 1 p.m. ET, FOX): They’re both basically toast, but it’ll be interesting to see how the Packers respond to Mike McCarthy’s firing.

10. Jaguars at Titans (Thursday night, FOX/NFLN): Tennessee still has playoff hopes but nobody expects the Titans to make a run. This looked good in September, but it’s become a dud. Don’t feel guilty for checking out the highlights later.

11. Bengals at Chargers (Sunday, 4 p.m. ET, CBS): Not even a thought unless the Chargers pull a Charger and it’s close late.

12. Steelers at Raiders (Sunday, 4 p.m. ET, FOX): Not even a thought unless the Raiders are within a score in the fourth quarter.

14. Lions at Cardinals (Sunday, 4 p.m. ET, FOX): Not even a thought unless the Cardinals sign Kurt Warner and insert him into the starting lineup.

15. Giants at Redskins (Sunday, 1 p.m. ET, FOX): You know how much higher this would rank if the Redskins would just give Colin Kaepernick a friggin’ shot?