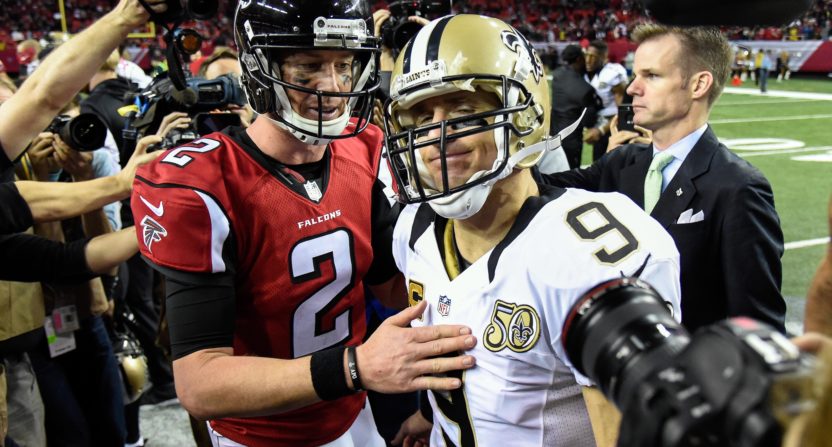 Week 16 of the 2017 NFL regular season is here, and you might be entering the holiday weekend with your own preferences regarding which games to focus on, and which to place on the backburner.

1. Falcons at Saints (Sunday, 1 p.m. ET, FOX): This is clearly the game with the highest stakes this weekend, and you can’t really go wrong with those two offenses. Expect fireworks.

2. Bills at Patriots (Sunday, 1 p.m. ET, CBS): Buffalo is fighting to make the playoffs for the first time this century, while the Pats have struggled a bit the last couple weeks. Considering that tempers might also flare as a result of that Rob Gronkowski incident from a few weeks ago, this is appointment viewing.

3. Rams at Titans (Sunday, 1 p.m. ET, FOX): Jared Goff vs. Marcus Mariota and the battle between those two running games would be compelling enough, even if both teams weren’t fighting for playoff positioning. The blowout potential exists, but it helps that the game’s in Nashville.

4. Jaguars at 49ers (Sunday, 4 p.m. ET, CBS): With Jimmy Garoppolo rolling, the red-hot 49ers are fun spoilers to watch right now, so this is a great opportunity to check out the suddenly respectable Blake Bortles and a Jags team that is a legitimate contender.

5. Seahawks at Cowboys (Sunday, 4 p.m. ET, FOX): Two juggernauts from recent seasons trying to stay alive. The winner will have a shot to make the playoffs, the loser will essentially be done. Plus, it’s Ezekiel Elliott’s return.

6. Raiders at Eagles (Monday night, ESPN): This could be one-sided in Philadelphia, but the Nick Foles-led Eagles deserve a close second look right now, especially considering how much that defense struggled against the Giants in Week 15.

7. Dolphins at Chiefs (Sunday, 1 p.m. ET, CBS): Doesn’t matter to Miami and barely matters to a Chiefs team that should win easily, but will likely finish in the No. 4 spot regardless.

8. Vikings at Packers (Saturday night, NBC): That Week 15 Green Bay loss really spoiled this. With Aaron Rodgers shut down, Green Bay might not put up much of a fight. And even if it does, Minnesota has already clinched the division.

10. Steelers at Texans (Monday, 4:30 p.m. ET, NBC/NFL Network): Probably a blowout, but at least Pittsburgh is on the road. Who knows, maybe the Texans will put up a fight and give us a good Christmas Day showing.

11. Buccaneers at Panthers (Sunday, 1 p.m. ET, CBS): Major implications for the Panthers, but the blowout possibility is strong in Carolina.

12. Lions at Bengals (Sunday, 1 p.m. ET, FOX): At least the Lions are fighting for their lives on the road, but this could be one-sided and Cincinnati is just depressing right now.

13. Colts at Ravens (Saturday, 4:30 p.m. ET, NFL Network): Baltimore needs it, but at home there’s a good chance it won’t be much of a challenge for the Ravens. Only worth monitoring in case the Colts put up an unlikely fight.

14. Chargers at Jets (Sunday, 1 p.m. ET, CBS): Part of me wonders if the Bolts will fail to show up after that deflating Week 15 loss to Kansas City. Regardless, there really isn’t much on the line here.

15. Giants at Cardinals (Sunday, 4 p.m. ET, FOX): No playoff implications here, but a Giants loss combined with a Browns win keeps Big Blue alive for the No. 1 overall pick.

16. Broncos at Redskins (Sunday, 1 p.m. ET, FOX): This is the only game in the early time slot in which both teams have nothing at stake.