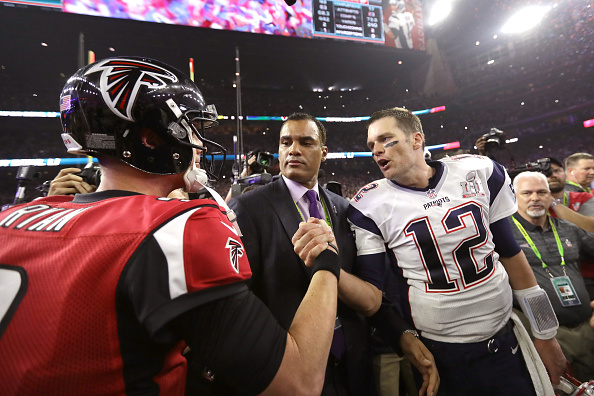 Week 7 of the 2017 NFL regular season is here, beginning with Thursday night’s Chiefs-Raiders tilt, and you might be entering the weekend with your own preferences regarding which games to focus on, and which to place on the backburner.

Most of you have your favorite teams and fantasy players to track. But in case you’re completely neutral or need help breaking ties with regard to what to watch, we’ve ranked all 15 games from most appealing to least enticing.

1. Falcons at Patriots (Sunday night, NBC): Naturally one of the most anticipated games of the year, and it’s actually a little more interesting since both teams have looked extremely flawed early on this season. And beyond the elephant in the room, it’s just a tremendous matchup.

2. Chiefs at Raiders (Thursday night, CBS/NFL Network): Looks like another strong TNF game here. Pretty much a must-win for the Raiders, but they haven’t been right and lost both of their matchups with Kansas City last season. Could be one of the games of the year.

4. Cowboys at 49ers (Sunday, 4 p.m. ET, FOX): This could be a sneaky fascinating game. Dallas can’t afford to fall to 2-4, but it could get interesting on the road against a San Francisco team that has lost five straight games by three or fewer points. Plus, rookie C.J. Beathard makes his first career start for the Niners.

5. Broncos at Chargers (Sunday, 4 p.m. ET, CBS): Two desperate division rivals. It’ll probably go down to the wire, as these types of games often do.

Its Bungles week! Who Dey? We Dey! #Steelers pic.twitter.com/mJV941oREd

6. Bengals at Steelers (Sunday, 4 p.m. ET, CBS): Maybe not as alluring as in recent years, but Cincinnati-Pittsburgh always includes drama. As long as the Bengals keep it close this’ll be worth having an eye on.

7. Cardinals at Rams (Sunday, 1 p.m. ET, FOX): Big early-season NFC West matchup, and both teams have been lighting it up offensively so we could have fireworks in London.

8. Buccaneers at Bills (Sunday, 1 p.m. ET, FOX): Two highly entertaining teams that have playoff aspirations but haven’t been there in a while. That makes this interesting, and it should be close.

9. Ravens at Vikings (Sunday, 1 p.m. ET, CBS): This is basically Bucs-Bills, except neither team is as entertaining.

10. Saints at Packers (Sunday, 1 p.m. ET, FOX): The Saints are on fire right now and it’ll be worth checking out Brett Hundley’s debut at Lambeau.

11. Seahawks at Giants (Sunday, 4 p.m. ET, CBS): This is one of those games you can afford to pay no attention to unless it’s close in the fourth quarter. And if it’s not, you can pretend it didn’t happen and give Seattle a win and New York a loss.

Morris Claiborne on Austin Seferian-Jenkins touchdown that wasn’t : “For most of us, the last thing on our mind was a touchback” pic.twitter.com/4ebnNlm0xf

12. Jets at Dolphins (Sunday, 1 p.m. ET, FOX): Yes, they’re both right there in the AFC East, but does anybody outside of New York of Miami believe they’ll be contenders in December or January? Ignore unless it’s close in the fourth quarter.

13. Panthers at Bears (Sunday, 1 p.m. ET, CBS): Worth checking out some Mitchell Trubisky snaps, but Chicago isn’t as good as its record and the Panthers have been inconsistent. Wouldn’t spend too much time here unless you’ve got Cam Newton or a Bears running back in fantasy.

14. Titans at Browns (Sunday, 1 p.m. ET, CBS): Marcus Mariota and the Titans are a draw, but not against Cleveland in a crowded time slot.