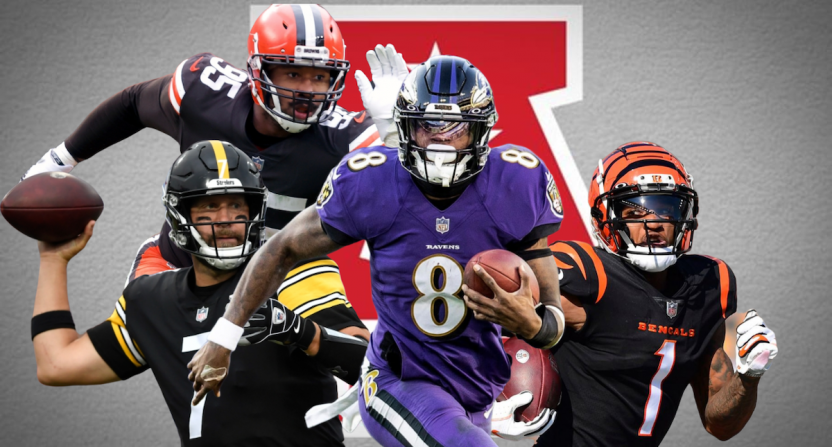 Who is going to win the AFC North? Your guess is as good as ours. Really.

You might as well write down names on paper, crumple them up, toss them in a hat, and blindly pull out each piece one by one. Chances are you could be close to what the final standings will be.

It is the only division in the NFL where you can simultaneously make a valid argument that [insert AFC North team of your choice] can finish first or last. It has been a ridiculous display of parity.

For now, the Baltimore Ravens are at the top with a 6-3 record. But thanks to last week’s 22-10 debacle at the lowly Miami Dolphins, the division has tightened up.

We expected the AFC North to be good. Last year, three teams won 11 games or more. What we didn’t expect was the ascension of the Cincinnati Bengals. We didn’t expect the Pittsburgh Steelers to remain relevant. And we didn’t figure that the Cleveland Browns would underachieve. These surprises have turned this race into an intriguing one.

What’s wilder? Of the five NFL teams with the hardest remaining schedules, four of them are members of the AFC North. Let’s take a look:

Normally, that would sink your season. But John Harbaugh has been able to steer the Ravens to first place. Thanks to Lamar Jackson, Baltimore has rallied from double-digit deficits three times.

However, the injuries — particularly in the backfield and along the offensive line — might be catching up with them. The Ravens have dropped two of their past three, including an embarrassing display against Miami.

Baltimore had been extremely fortunate earlier in the season. It needed an NFL-record 66-yard field goal from Justin Tucker to beat winless Detroit. A late fumble was also needed to beat Kansas City. The Ravens are a good team but their margin for victory is slim, especially with a pass defense that has yielded the most yards in the league (283.3 per game).

They will close the season with a brutal schedule that includes the Rams, Packers, Steelers (twice), and Browns (twice).

Before Ben Roethlisberger was sidelined last weekend due to COVID-19, the Steelers had been healthy. They have placed only 12 players on IR, tied for fourth-fewest in the league.

The performance against the Lions underscores Pittsburgh’s biggest problem: the lack of quality quarterback play. The fossilizing remains of Roethlisberger are still a better option than Mason Rudolph or Dwayne Haskins. If Roethlisberger plays, the Steelers win and are in first place.

But while Roethlisberger might be good enough to get Pittsburgh to the postseason, there are serious doubts as to whether he’s good enough to win playoff games anymore. He can’t move and his arm strength is gone.

That’s too bad because the rest of the team is solid. The defense has allowed the eighth-fewest points in the league (20.6). And assuming pass rusher T.J. Watt (hip and knee) and safety Minkah Fitzpatrick (COVID-19) don’t miss considerable time, that unit could carry the team to a division title repeat. The biggest challenge will be the hardest remaining schedule in the league that includes the Titans, Chiefs, and Ravens (twice).

Remember when Zac Taylor was the betting favorite to be the first coach fired? Well, he’s one victory away from matching his total from his first two seasons. Taylor, 38, was supposed to be the latest Sean McVay whiz kid disciple. Looks like the hire is finally paying off.

Taylor should send a thank you card weekly to Ja’Marr Chase. The decision to draft the speedy wide receiver over an offensive lineman and reunite Chase with his former LSU teammate Joe Burrow looks brilliant. The Chase-to-Burrow combination is as electric as it was in college. Chase is on his way to having one of the best rookie seasons by a wideout ever and is the leader for rookie of the year.

It also helps that Burrow has stayed healthy. The offensive line isn’t great but has been better than last season, ranking No. 20 by Pro Football Focus. And the defense has been decent, although allowing Jets backup Mike White to look like Aaron Rodgers was stunning.

Cincinnati’s remaining schedule is tough, but it’s the easiest in the division. The rematch against Baltimore is pivotal, as a victory would give the Bengals a sweep and the tiebreaker.

The Browns don’t have a bad loss. The Chiefs, Chargers, Cardinals, Steelers, and Patriots all have winning records. And three of those losses were by a single score. However, last weekend’s beatdown at New England was alarming.

But remember that the Browns have a quarterback playing with one good shoulder, and now Baker Mayfield also has a knee injury. The backfield has been decimated. Kareem Hunt (calf) is on injured reserve and Nick Chubb (COVID-19) missed last week’s game.

The Browns are a run-first offense that needs both running backs healthy to consistently win. Putting the game in the hands of Mayfield is risky. He ranks 16th in the league in passer rating and has thrown for only nine touchdowns in nine games. And the defense has been a disappointment. While Myles Garrett might be the Defensive Player of the Year, he can’t do it all by himself. And Garrett is mad at the coaching staff.

There is still time for the Browns to turn it around. They next play the Lions and have consecutive games against the Ravens sandwiched around a bye.