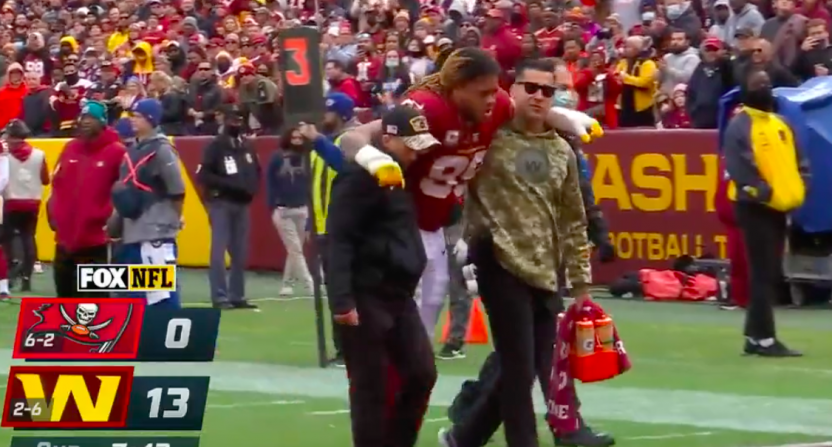 Washington Football Team fans were in stunned silence on Sunday as they watched star defensive end Chase Young lay on the ground following a non-contact leg injury. Now, they’re just waiting for news that will confirm their worst fears about his status for the rest of the season.

The incident happened midway through the second quarter when Young was attempting to get to Tampa Bay Buccaneers quarterback Tom Brady. He stepped the wrong way and suddenly crumpled to the ground, remaining there in obvious pain, unable to get up.

Chase Young is down on the field after the previous play. pic.twitter.com/wnNh8ial5k

The game was stopped for some time and an injury cart was brought out to help Young, who eventually called it off and walked off the field on his own. Soon after, WFT announced that Young was done for the day. Now, the assumption is that a torn ACL announcement will come as soon as Monday, though it’s currently unclear the extent of the injury.

The initial fear for Washington DE Chase Young is a torn ACL, source said. The team is awaiting a full battery of tests, but if the diagnosis is confirmed, that would, of course, knock him out for the season.

The disappointment on Young’s behalf was evident from people across the NFL on social media.

Man this is awful. Prayers up for a strong recovery for Chase Young ☹️ https://t.co/8yzgX6YuiF

As I mentioned on @NFLNetwork today, Chase Young was on the field pregame and signed autographs for all of the members of the military who wanted one. And there were a lot of them. At one point, Chase needed another Sharpie to continue signing.
Knee injury now = just awful.

Young has become a face of the franchise for WFT this season after earning NFL Defensive Rookie of the Year and a spot in the Pro Bowl last year. It’s a crushing blow for him, their defense, and the fanbase, all of whom were hoping to see so much more from him in the months ahead.