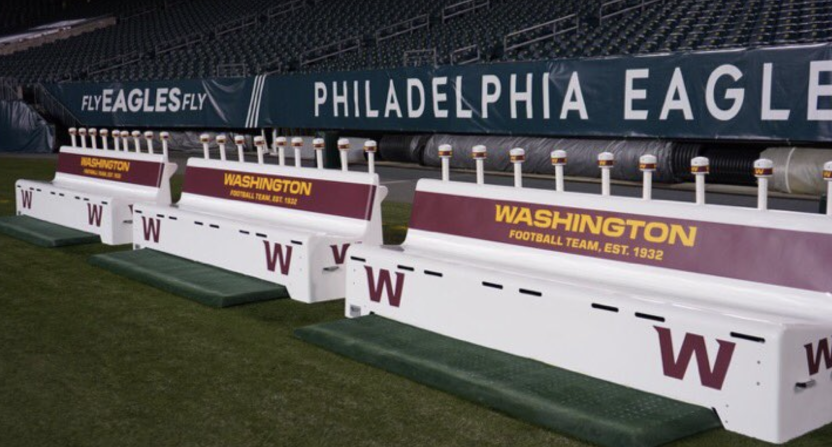 Two weeks ago, the Dallas Cowboys visited the Washington Football Team and brought some benches with them. While it was initially perceived as a petty move, it was revealed that the Cowboys had been told that the FedEx Field visitor team benches didn’t always work, so they figured they’d take care of themselves.

However, when it comes to the Cowboys and WFT, rivalry can turn anything back into a petty fight.

WFT travels to play all three NFC East rivals on the road in the next four weeks and they intend to stay warm while doing it. According to Mitch Tischler, the team has ordered special heated benches that will travel with the team when they play the Philadelphia Eagles tonight, Dallas Cowboys next weekend, and the New York Giants on January 9.

We have a bench update! #WashingtonFootball reached out to @DragonSeats on Monday following the Dallas game and are planning to use them for the rest of the season, in Philly, in Dallas, in New York pic.twitter.com/H8IEJZS5Ke

We should have seen this coming. When the Cowboys brought their benches to FedEx Field, the WFT head coach told reporters that “That’s all gamesmanship that goes with it. It’s part of the mind games people like to play.” And when asked to confirm that his team wouldn’t do the same, he said, “I didn’t say that.”

After the Cowboys brought their own benches to Washington, Ron Rivera said: “That’s all the gamesmanship that goes with it. It’s part of the mind games people like to play.”

So he’s not bringing his own benches to Dallas? Rivera: “I didn’t say that.”

There’s never a dull moment in the Dallas-WFT rivalry and now Washington has extended the pettiness across the NFC East. Even when it’s down, it’s still one of the meanest divisions in the NFL. And NFL folks on Twitter appreciated the shade.

A reminder that AT&T Stadium is climate controlled and temperatures on Dec. 26 should be in the 60-70s at kickoff. https://t.co/Jf7MByHJdK

Reportedly, this all started because the benches in their stadium didn’t work. If they would have just replaced those, none of this ever happens. Instead they buy new benches for the road to replace working benches at other stadiums while their home benches still don’t work??? https://t.co/1D48HfipRR

well if this ain’t the most little brother thing I’ve seen in a minute https://t.co/DeaJlq4P7m

Dallas did BYOB and won; it looked cool. You can’t BYOB and lose. I like the energy and gamesmanship, but you gotta walk the walk, too. https://t.co/T9Xp2PZjos

Washington Football Team and its owner don’t exactly have the best reputation these days, and if they end up losing after lugging their benches all the way up to Philly, sounds like plenty of people will be happy to clown on them about it.