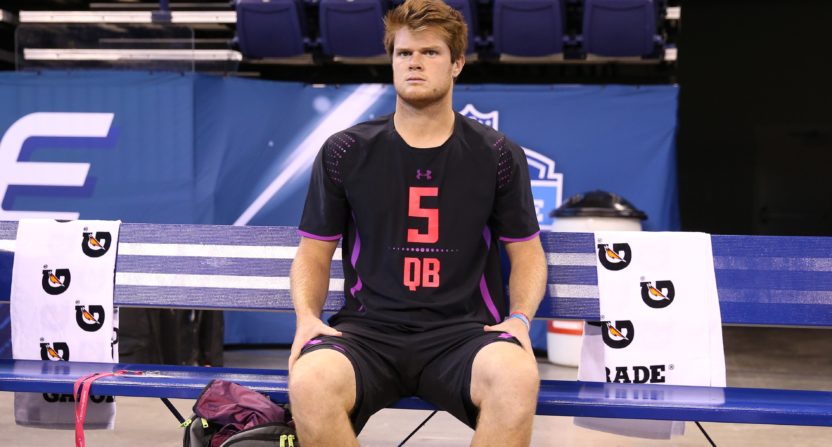 Pre-May, the NFL offseason moves quickly. Just a couple weeks ago, we wrapped up the NFL Scouting Combine by projecting the top 10 picks of next month’s NFL Draft. Today, we’ve got an update that looks a hell of a lot different.

Free agency changed the game, as did trades involving top-six pickers Cleveland, the Giants, Indianapolis, the Jets and Tampa Bay.

So what effect has the free agency had on the draft thus far? Yes, it’s still too early to predict which players will go where. No, we don’t care. Don’t be a parade-ruiner and just enjoy these inevitably off-base projections for the first 10 picks with the draft four weeks out.

It looks as though the Browns have fallen hard for Darnold. That supposed interest could be a smokescreen, but a strong pro day probably put him over the top anyway. With the Jets likely to take a quarterback third and the Giants potentially trading the No. 2 pick to a quarterback-needy team, Cleveland probably won’t want to risk waiting to draft one in the No. 4 spot.

I don’t think the Giants are going quarterback yet after investing heavily in aging left tackle Nate Solder, which suggests they’re trying to win right now. The Jason Pierre-Paul trade probably means Chubb is their favorite player for this spot, but I think the odds are good they trade this pick to Buffalo or Miami.

The Jets were stupid enough to trade away three second-round picks in order to move up three first-round spots six weeks prior to the draft. They’re definitely stupid enough to take a Wyoming product with a college completion percentage of 56.2 over much better prospects Josh Rosen and Baker Mayfield. The irony is they might be able to get Allen in the No. 6 spot anyway.

Barkley looks like a potential generational talent. I originally had them going Barkley-Darnold, now it looks like they’ll end up with the same combination in the opposite order. That would be a fun rookie duo to watch for a team that is destined to be a lot better in 2018.

Chubb could slide here if the Giants trade out of the No. 2 spot and another quarterback goes there, making that trade with the Jets look fantastic. If he’s not, I could see them trading down again. But if they stand pat and Chubb isn’t available, Ward makes a lot of sense as the top defensive player available and a potential immediate starter in place of the departed Rashaan Melvin.

Feels like a pretty clear-cut “best player available” spot for the Bucs, who could certainly use a presence like Fitzpatrick in the secondary. I also wouldn’t rule out a trade down here so that they could take an offensive lineman later in the first round.

If indeed Rosen and Mayfield drop, someone will have traded up by now to grab one of them, especially with Ward and Nelson off the board for the Bears. But without speculating on deals, Edmunds makes sense as a potential centerpiece of the Bears defense. He’s still a bit raw, but has an incredible high ceiling.

I expected San Francisco to do more in free agency to help quarterback Jimmy Garoppolo, but that might mean they’ve fallen in love with a receiver in this draft. Ridley is the best of the batch.

The Raiders will have trouble deciding between Smith and enticing former Washington defensive tackle Vita Vea. Regardless, they need to do more to bolster that defense beyond the edge-rushers. This makes too much sense.