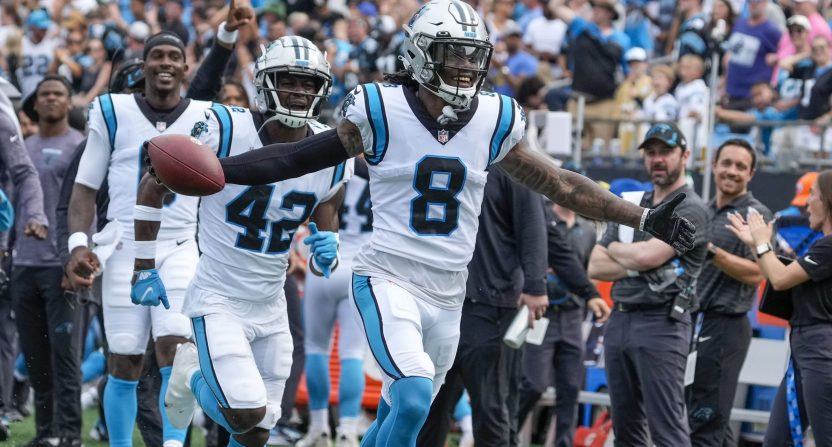 Through two weeks of the NFL season, we have the usual mix of hot-starting teams that are legitimately on the path toward a great season and those that are pretenders — the ones that for whatever reason won’t be able to sustain their early success.

Seven teams are 2-0, including the Carolina Panthers, who will have a good chance to go to 3-0 on Thursday Night Football against the Houston Texans. Per Sporting News, 60 percent of teams since 2007 that have started 2-0 have gone on to make the playoffs. Let’s take a look at each of the remaining unbeaten teams and evaluate what’s gone right and what it means:

The story for the Panthers so far has been their defense. Their front seven has been absolutely dominant, especially against the run. They held Alvin Kamara to five yards on eight carries in Week 2, and shut down all of the New York Jets’ running backs the week before. They forced significant struggles out of Jameis Winston a week after he tore up the Green Bay Packers’ defense.

These dudes FLYYYYYYYYY to the ball on every play. Reminds me of peak Texans under Wade Phillips back in 2011-2013.

Carolina has managed to concede just 22 first downs on the season, seven fewer than the next-closest team, and easily leads the league in fewest yards given up. They’ve done it with heavy pressure (they lead the league in pressures) and stout run defense. Their offense might not keep up (though Sam Darnold has managed to be competent), but the defense looks like it can win the Panthers some games.

We all know the deal with this team — they’ve been very good through two games as expected, outlasting the Dallas Cowboys in a shootout and then dismantling the hapless Atlanta Falcons. Tom Brady has had two vintage performances, leading a game-winning drive against Dallas and then throwing for an efficient five touchdowns against Atlanta.

Brady, who’s already a top MVP candidate, has been spreading the wealth as usual. Notably, he has been finding Rob Gronkowski consistently, especially in the red zone. Gronk, continuing his Super Bowl form, has four touchdowns already and 12 receptions across two games. The Bucs, unsurprisingly, are as advertised.

So far, the Niners have played two opposite games. They won a 41-33 game against the Detroit Lions in Week 1, which was not as close as the score indicates, and then fought through a 17-11 win over the Philadelphia Eagles. They’ve kept up the Jimmy Garoppolo experience, as Trey Lance interestingly received zero snaps against Philly. With a big Sunday night game coming up against Green Bay, Lance could serve as a change-of-pace quarterback.

The running back injuries have hurt. San Francisco is down to practice squad backs with Elijah Mitchell and Trey Sermon listed as questionable this week. But if we’ve learned anything about Kyle Shanahan, it’s that he can get something out of any running back. Plus, he’s seen Deebo Samuel look like a No. 1 wideout through two weeks.

The biggest story for the Rams was always going to be Sean McVay getting to call plays for a more independently talented quarterback, and we’ve seen how well that can go through two weeks. They’re still working everything out, but Matthew Stafford has shown why the Rams traded all those first-round picks to acquire him. He has that extra ability to put the ball in the right spots.

So far, he’s chosen Cooper Kupp as his favorite target. Kupp is averaging eight receptions per game and has produced over 250 receiving yards already. The Rams beat the Chicago Bears and Indianapolis Colts, and now have a blockbuster with the Bucs coming up.

Here we have the third NFC West team to start 2-0. The Cardinals needed a crucial field goal miss from the Minnesota Vikings, but they’ll take two wins over playoff contenders. Kyler Murray is the main story — Murray looks like he’s taken something resembling an MVP leap through two weeks, accounting for five touchdowns in both games.

When the play breaks down, Murray has been an expert at keeping his head down the field and finding receivers. He has downfield threats like rookie Rondale Moore, Christian Kirk, and of course DeAndre Hopkins. The Cards’ defense struggled against the Vikings, but their impressive performance against the Tennessee Titans in Week 1 showed that they could hang with talented teams.

The Broncos do not exactly have the NFL’s toughest schedule to start the season. They’ve beaten the New York Giants and Jacksonville Jaguars so far and face the Jets this week. But regardless of the strength of schedule, their defense looks like one of the best in the NFL. They have shut down the run and covered flawlessly in the secondary.

That was particularly evident last week against Jacksonville, when they overwhelmed all of Trevor Lawrence’s targets and forced him to throw into tight windows consistently. Lawrence finished 14-of-33 passing with two interceptions. It’s a good bet that they’ll do the same thing to the struggling Zach Wilson and the Jets.

One of the stories of the NFL so far has been the impressive Raiders, who have seen Derek Carr raise eyebrows as one of the “early season hype” quarterbacks. He leads the league in passing yards, as he’s fished out two impressive wins over AFC North opposition in the Baltimore Ravens and Pittsburgh Steelers. Darren Waller has been his favorite target, as expected, but he’s also found Hunter Renfrow and Henry Ruggs III on big gains.

The Raiders’ defense has been pretty good as well, with the pass rush looking productive. Jon Gruden’s team gets to face a Tua Tagovailoa-less Dolphins in Week 3, with a good chance to move to 3-0.