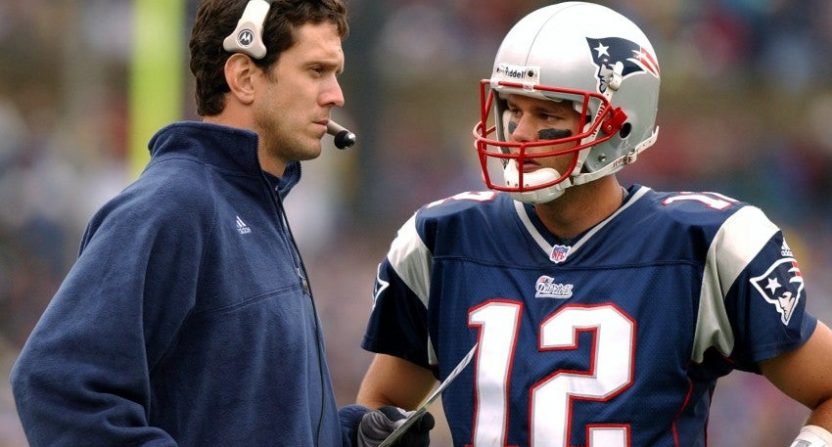 The “butterfly effect” is when even a small change could result in larger changes in the future. Sports are no exception to that phenomenon. There have been so many monumental, history-defining moments in sports but if some of those moments hadn’t happened or if their outcome had been different, our view of sports as we know it may be vastly different. “What if…” looks at some of these big moments and speculates on how that sport, or maybe sports in general, may look if the outcome had been different. This week, we take a look at what might have happened if Drew Bledsoe never got injured in 2001 and Tom Brady didn’t make his debut when he did. Future installments will be on Awful Announcing and The Comeback.

The New England Patriots were solid, but they weren’t anything special before the 2000s. They had the occasional playoff appearance, but the best they could do was losses in Super Bowls XX and XXXI where they never really had a chance.

Entering the 2001 season, the Patriots were coming off two consecutive seasons where they didn’t make the playoffs. After going 8-8 in 1999, the team signed Bill Belichick to be head coach, but his first season was a forgettable 5-11 year. It was at this time where the Patriots drafted a quarterback in the sixth round of the NFL Draft.

Just like the team, there really wasn’t anything special about Tom Brady at the time. He was good in college, but those quarterbacks are a dime a dozen. But with Drew Bledsoe as the starting quarterback at the time, there was no pressure for Brady to do anything. If you’re drafting someone in the sixth round, you’re not expecting much from them at the start, but you hope they can someday be impactful.

Even if Belichick saw something in Brady, he probably wasn’t expecting anywhere close to what Brady would become.

The Patriots began the 2001 season under inauspicious circumstances. With losses to the Bengals and the Jets, this seemed like another difficult year for the team in Foxboro. Things got from bad to worse in Week 2 as Bledsoe got hit and suffered a catastrophic chest injury.

Way before anyone expected him to step up, Brady came in and stepped up. Brady took charge and the Patriots went 11-3 that season while he was the starter. It was a massive surprise, but at 11-5, the Patriots tied their best record since their Super Bowl XXXI season.

The Patriots opened their playoff campaign by welcoming the (then) Oakland Raiders to snowy Foxboro Stadium. The Tuck Rule Game would wind up shaping so many legacies over the next 20 years. That game showed that Brady could lead a team late. It showed that Adam Vinatieri was clutch in high-pressure situations. And that game showed that the Patriots seemed to be on the fortunate side of many calls.

In Super Bowl XXXVI, the Rams were 14-point favorites. In hindsight, the Patriots really were better than what people gave them credit for (including a 24-17 loss to the Rams in Week 10), but the Rams were the “Greatest Show on Turf”. And if there was going to be one quarterback who came from nothing and vaulted to greatness, it was going to be Kurt Warner.

Instead, the Patriots took it to the 14-2 Rams and had a 14-3 lead at halftime. Just like against the Steelers, the Patriots focused on taking an early lead and holding off their opponents as they caught up. This time, the Rams came back and tied things up, but the Patriots had another trick up their sleeve. Brady led the Patriots on a last-minute drive and Vinatieri kicked the game-winning field goal.

That began a dynasty that took over the NFL for the next couple of decades. In total, the Patriots would win six Super Bowls, appear in three others, and were contenders in all that time. Would this have gone the same way if Bledsoe was never injured?

What if Bledsoe never got injured?

This isn’t revealing anything new; Tom Brady wound up being a better quarterback than Drew Bledsoe. Before Week 2 of the 2001 season, there were no plans to play Brady, and that probably would’ve been the case for a while. Bledsoe had just signed a 10-year contract, so the Pats made their decision and Bledsoe was going to be their guy for the foreseeable future.

As far as Brady is concerned, he’s way too talented to be left on the bench his entire career. At some point, Brady would’ve played and impressed, so while it was going to happen later than it actually, he would’ve had this kind of success eventually.

The most likely scenario is that Brady would’ve kept impressing in practice, and Belichick would’ve seen something in Brady. At some point, Belichick would’ve had to make a decision to either stick with Bledsoe or go with Brady and find a possible trade partner for Bledsoe. Assuming Belichick went with Brady, their success probably would’ve hinged on when the move took place. Given that the Patriots won three Super Bowls in four years at that time, Belichick may not have made the move by the time they won those titles.

With that being said, if Drew Bledsoe wasn’t injured when he was, Tom Brady and the New England Patriots would’ve eventually had success- but that would’ve taken place at a much later time. They would’ve won multiple Super Bowls, and Brady and Belichick would’ve still had Hall of Fame careers, but they probably wouldn’t have been as successful. They would’ve been stars, but Brady having to start right away wound up making them legends.