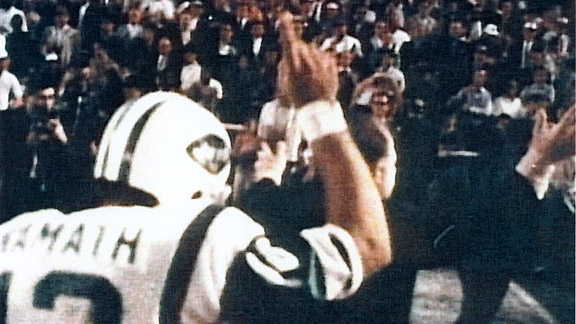 The “butterfly effect” is when even a small change could result in larger changes in the future. Sports are no exception to that phenomenon. There have been so many monumental, history-defining moments in sports but if some of those moments hadn’t happened or if their outcome had been different, our view of sports as we know it may be vastly different. “What if…” looks at some of these big moments and speculates on how that sport, or maybe sports in general, may look if the outcome had been different.

Super Bowl III was at a very pivotal time for the NFL. The rival American Football League formed in 1960 and had built themselves up to be such a force that the NFL could no longer ignore them. As a result, the two leagues merged and thus formed the AFL-NFL World Championship Game, or “Super Bowl.” The first two Super Bowls had been blowouts from Vince Lombardi’s Green Bay Packers and that helped fuel the mindset that the NFL was vastly superior.

The NFL, both financially and in terms of on-field talent, was arguably the better league but it wasn’t like the AFL was broke and had semi-pro talent. The NFL was established and more understood by the general public, but the AFL was new and modern, transforming the sport of football closer to how we view the game today. In addition, the AFL brought on many players who had been cut from NFL teams and searched for talent in areas where the NFL largely ignored like historically black colleges, helping integrate the sport at a faster rate than the NFL had been.

One major reason the AFL and NFL merged was because both leagues were in a bidding war for top talent and spending was spiraling out of control. That came to a head in 1965 when Alabama quarterback Joe Namath entered the pros. The St. Louis Cardinals of the NFL and the Jets drafted Namath but both were in a race for Namath’s signature. In the end, the Jets paid over $400,000 over three years, which was a record at the time for a pro football player.

Four years later, the New York Jets and Baltimore Colts faced off at the Orange Bowl in Super Bowl III. The Jets ran away with the AFL East and finished with an 11-3 record. While they had a great season, the most memorable moment of their 1968 regular season was the infamous “Heidi Bowl” where NBC cut to the movie Heidi at the top of the hour instead of staying with the end of an exciting Jets-Raiders game that was going down to the wire. As a result, viewers didn’t see the Raiders come from behind and score 14 points in nine seconds in the final minute to win 43-32.

The Colts were widely regarded as not only one of the best football teams that season but one of the best all time. The Colts finished the season 13-1, and after they suffered their only regular-season loss to the Browns, the Colts avenged that loss and dominated the Browns 34-0. Even though Johnny Unitas was injured for the entire season, backup Earl Morrall stepped up and won the NFL MVP that season.

While Namath didn’t have a great game, he backed up his guarantee. In a team effort, the Jets’ defense intercepted four passes and kept the Colts scoreless until about three minutes left in the game. Matt Snell ran for 121 yards and George Sauer had 133 receiving yards as the Jets won 16-7. The result was one of the biggest upsets in sports history and most pivotal Super Bowls ever.

What if the Jets lost?

Let’s get the obvious out of the way. If the Colts had won Super Bowl III, it likely would’ve gone down as one of the worst Super Bowls of all time. Watch the broadcast; Super Bowl III was a highly important game in NFL history but, Jets’ upset aside, that was a terrible game.

That being said, the Jets winning likely resulted in NBC saving their Super Bowl broadcast. Back in the early days of television, networks would “wipe” tapes in order to use them for future programming. That sounds ludicrous today, but there was no YouTube or cable that would be cool with broadcasting previously aired programming. And to keep tapes from piling up, networks reused the tapes. Many of the early Super Bowls are believed to be completely “lost” or have large portions of the game missing. That is, except for Super Bowl III. So it’s a good thing the Jets won and indirectly helped save a championship game from being lost in history.

Another thing that wouldn’t have happened had the Jets lost Super Bowl III was Joe Namath being in the Pro Football Hall of Fame. Namath was inducted in 1985 and while he had a good career, Super Bowl III and his guarantee got him in the Hall of Fame. Even though quarterbacks didn’t pass as often as they do today, Namath’s stats don’t exactly say “Hall of Famer.”

Namath threw for more interceptions than touchdowns in his career and in 11 of his 13 seasons. He only threw more than 3,000 yards three times and 4,000 yards once and his career largely went downhill after his title win. Granted, this was great for a guy who had bad knees when he entered the pros, playing in a time where a knee injury may have been career-ending, but Namath wouldn’t have touched the Hall of Fame without Super Bowl III.

Having said all that, the biggest thing that would’ve changed had the Jets lost Super Bowl III would’ve been the NFL itself. Before Super Bowl III, the AFL was viewed as an inferior league from many people. Sure, the AFL and NFL merged but the NFL didn’t really take AFL teams seriously. Many of the players on AFL teams were cast-offs from other NFL teams and were put on teams that formed at the start of the decade. And two of the best teams in the AFL were blown out in the first two title games. Of course the NFL didn’t really respect the AFL.

Another NFL win in Super Bowl III would’ve meant passing a point of no return in terms of equality between the AFL/AFC and NFL/NFC. The merger probably would’ve still gone through, but the stigma of the original AFL teams would’ve resonated for a very long time. Those eight teams would’ve been in the NFL, but they wouldn’t have been seen as “NFL teams.” Would those teams have remained in the NFL after 50+ years? It sounds unthinkable to consider but if the Jets hadn’t won Super Bowl III, the entire fabric of having the same 32 teams likely would’ve been altered and football being the most popular sport in America arguably may not have happened.

Granted, this equality didn’t happen right away after the Jets won. The Chiefs were double-digit underdogs when they won Super Bowl IV, and the undefeated 1972 Dolphins were slight underdogs in Super Bowl VII. But that began a path that eventually led to the two divisions truly becoming one league. While the NFL probably wasn’t thrilled with an AFL team winning the Super Bowl, the league benefited in the long run. That’s the significance of Super Bowl III.