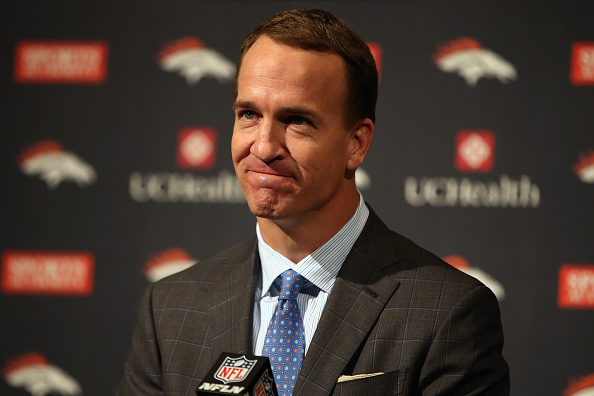 The intrigue surrounding the possibility of Peyton Manning finally coming to a television set or streaming device near you is seemingly never-ending. Ever since he retired, Manning’s name has come up for every single major job opening at the networks that cover the NFL.

Yet to this point, he hasn’t taken the leap into the media. It’s perhaps surprising given Manning’s loquaciousness and the fact that he’s hardly ever met a camera he didn’t like. (Seriously, has the guy ever turned down a sponsorship opportunity?)

Right now, if Manning finally decides to take the plunge and work in television, it seems like it’d be at ESPN or Fox as the two networks are reportedly bidding for his services. And a recent report from the New York Post highlights a potential role for Manning at Fox as the game analyst for their new Thursday Night Football package.

According to the Post, Fox could offer Manning the Thursday analyst gig, a Wild Card playoff game (that the network will take over from ESPN this year), and a potential studio role during the playoffs and Super Bowl.

The question becomes whether or not that’s the best fit for Manning. He can basically name his price and what he wants to do on television, given the networks would pretty much grant him anything to get him on their airwaves.

If Manning were to go in that direction with Fox, it could be a very good fit for him. Wherever he goes, Manning is going to want to be an “A” level analyst. If Fox wants to use an entirely new crew for Thursday Night Football, it would be exactly the kind of primetime network opportunity he’d be looking for and he would provide exactly the kind of splash Fox is looking to make. With everything the NFL is still trying to do to make Thursday Night Football a thing in forcing it on the American public, the prospect of Peyton Manning in his debut broadcast season would be another attempt to validate its existence.

It’s just difficult at this point to visualize Manning yukking it up every Sunday morning in between Terry Bradshaw and Michael Strahan as part of the Fox studio crew. Sure, Manning has shown his comedic chops on SNL over the years, but there’s sketch comedy… and then there’s whatever it is that the NFL morning pregame shows do.

If he were to do select work during the playoffs and/or Super Bowl, one could easily envision it in some kind of on-site setup like NBC does, where he could work as a solo analyst on a second set. If Fox were to use Manning in that capacity, he wouldn’t get overshadowed by the other voices on set. Let’s be honest — every NFL studio is probably overcrowded as it is.

What about ESPN? Obviously, Manning would replace Gruden as the lead analyst on Monday Night Football. While the franchise may have fallen behind Sundays and Thursdays on the primetime pecking order, it’s still a big deal. (That would likely come with a big contract; Gruden was at one point ESPN’s highest-paid employee, according to reports.) And the biggest factor may just be that ESPN can offer Manning opportunities on a 24/7 basis that no other network can.

Manning could pick his spots where and when he wanted to work. Host a special “Gruden QB Camp” like series? Done. Host the ESPYs every year? Sure thing. Host the 6 PM SportsCenter? Why not? No other network could offer those kinds of platforms on a year-round basis. But since ESPN covers the league on a 24/7/365 continuum, Manning could theoretically fill whatever roles he would want.

When it comes to perfect roles, ESPN has always seemed like the network that could offer Manning the biggest role and the most exposure for those reasons. But that would only seem to work out if Manning really wants to make television the focus of his post-playing days. To this point, we haven’t seen any evidence of that being the case.

If the future Hall of Famer is looking for something smaller (breaking into television in a more limited capacity), the Thursday Night job at Fox with just a handful of additional experiences could be more what he is looking for so that he still has time to pursue outside opportunities.

Of course, it could be that the perfect television role for Manning is no role at all. In that case, we’ll have to wait until next year when the networks will surely pursue his services once again.