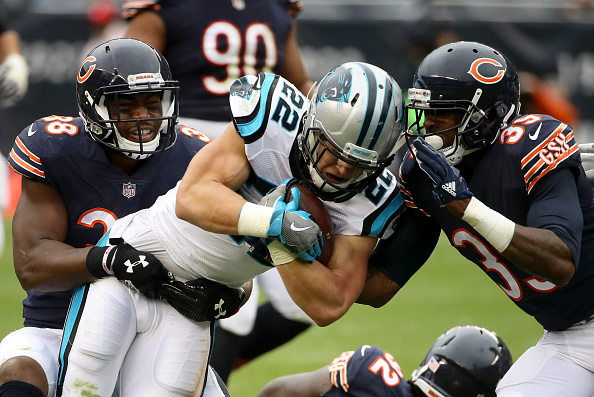 There was obviously plenty of pre-draft hype surrounding Stanford’s Christian McCaffrey, but there were also plenty of questions about the role he would be best suited for in the NFL. McCaffrey is a running back with exceptional pass-catching skills, but we didn’t know if he was big enough to excel as an every-down back or if he has the capability to do so as a slot receiver.

The Carolina Panthers thought they did. Otherwise, they wouldn’t have used a top-10 draft pick on McCaffrey. But the 21-year-old has yet to deliver at the running back position. Among 46 players who qualify, McCaffrey ranks last in the NFL with a 2.5 yards-per-attempt average.

And while McCaffrey has caught an impressive 44 passes for 329 yards and two touchdowns, that doesn’t make up for the fact he’s yet to score a rushing touchdown and has just one rush of more than eight yards. He’s had five 15-yard receptions, but three of those came in the first three weeks of the season and he’s gone over 20 yards just once on 99 touches this season.

In terms of DVOA (Defense-adjusted Value Over Average) Football Outsiders ranks him 82nd among 83 backs at running the football.

It hasn’t helped that Carolina’s offensive line isn’t very good, and that center Ryan Kalil has been out for much of the first half of the season. Still, he hasn’t been able to break off big runs even when the protection and the holes have been there.

Eight weeks into the season, it’s still early, but McCaffrey doesn’t look like a play-maker. With Hunt crushing it out of the third round, that might soon cause the Vikings to wonder if they would have been better off doing something else with that No. 8 overall selection.