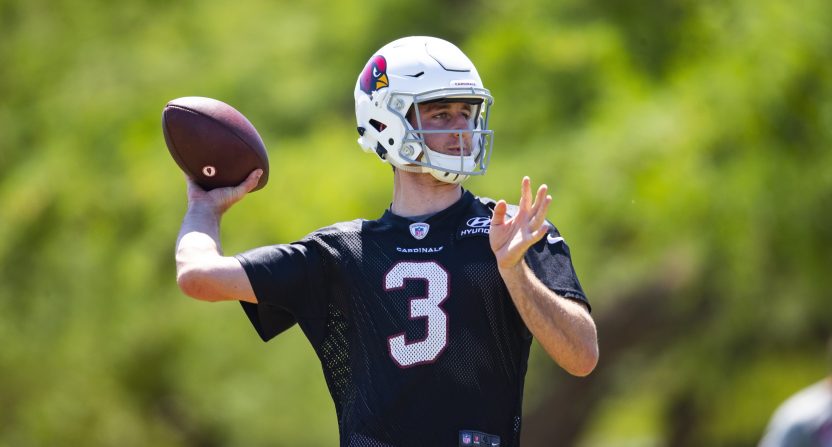 Five quarterbacks were selected in the first round of the 2018 NFL draft, but the entire handful entered organized team activities as clear-cut backups. Eventually, several if not all of them will earn a chance to start.

When will that come? Here’s our best guess for all five.

Browns head coach Hue Jackson insists that veteran Tyrod Taylor will start ahead the No. 1 overall pick, and it’d be surprising if they didn’t stick to their guns on that. Taylor is an above-average quarterback walking into a lot more support than is typical in Cleveland, but watch for the Browns to cave to the pressure to make a change when they’re, like, 2-10 in December.

Prediction: Week 14 at home against the Carolina Panthers

The Jets also seem set on starting veteran Josh McCown, who is a solid bridge on a one-year, $10 million contract. But Darnold is relatively polished and the Jets aren’t as good as their 5-11 record from last season, which means that eventually they’ll be far from contention and it’ll make too much sense to give Darnold a shot. Making things a little more complicated is Teddy Bridgewater, who has garnered some buzz and could end up starting early. If Darnold is the No. 3 guy, he might make it the whole year without starting. They’ll probably throw him a start in a season finale that should be meaningless for both teams.

AJ McCarron is less locked in as Buffalo’s starting quarterback, because the Bills are less committed to him financially than the Browns to Taylor or the Jets to McCown. Plus, unlike those veterans, he wasn’t a starter before this offseason. So it’s not surprising that the front office isn’t ruling out the possibility of No. 7 overall pick Josh Allen starting from the get-go this season. The problem is Allen remains extremely raw coming out of Wyoming with accuracy questions, and he’d be best-served spending a year with a tablet on the sideline. The Bills are in for a back-to-earth season, though, so look for them to give him a start or two in place of McCarron when they’re out of contention in December.

Prediction: Week 14 at home against the New York Jets

The Cardinals have also left the door open for No. 10 overall pick Josh Rosen to step in and start right away, which makes sense considering how polished Rosen is coming out of UCLA. This is the trickiest one, though, because you’re sort of left wondering when fragile starter Sam Bradford will suffer an injury. That’s not a fun thing to do, but it’s the reality with Bradford, who can be a franchise quarterback when he’s at his best but has missed the majority of three of his last five seasons due to knee issues. Look for Rosen to relieve the highly-paid Bradford at some point midway through his rookie season and never look back.

Prediction: Week 11 at home against the Oakland Raiders

Jackson might have a higher ceiling than any quarterback in this rookie class, but he’s also expected to need more time before taking the reins at the NFL level. He’s a project for the Baltimore Ravens, who don’t exactly operate compulsively. Joe Flacco is a mediocre starting quarterback, but they’ll likely give Flacco one full season to prove that he still deserves that title, and the defense is good enough to keep Baltimore in contention regardless of what Flacco does.

1 thought on “When will each first round quarterback get their first start?”