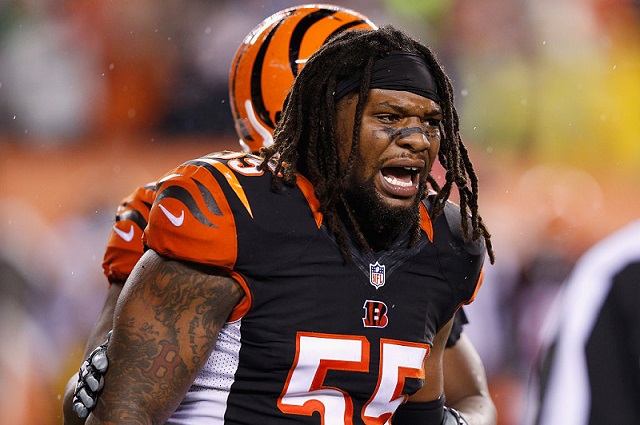 Another day, another fine for Vontaze Burfict.

This past Sunday, Burfict and the Cincinnati Bengals were taking on the New England Patriots. At one point during the game, Burfict allegedly stomped on Patriots’ running back LeGarrette Blount and later on hit Martellus Bennett when he wasn’t the intended receiver. Pittsburgh Steelers guard Ramon Foster on Tuesday called the latter hit “insane.”

Those two plays by the linebacker resulted in a $75,000 fine handed down by the NFL Wednesday, according to ESPN. The league won’t suspend Burfict, who has already appealed the fine.

At this point, Burfict’s act is getting old. How old? Well, let’s look at the numbers.

Since 2012, no player has been fined more than Vontaze Burfict. pic.twitter.com/gJKVWscpmi

Oh wow. Burfict has been fined more than every single other NFL player since 2012, and it’s not that close. He’s been fined $26,829 more than the next closest player, Dashon Goldson.

However, the numbers look even worse when you adds on how much he’s lost from paychecks during suspensions.

Mike Pereira is a former NFL official and VP of Officiating for the league. While appearing on The Rich Eisen Show, Pereira pointed out how old this act of Burfict’s is, suggesting the linebacker be suspended in addition to fined.

“If it’s a large fine and not games they don’t have any guts,” Pereira said. “I mean, the guy was suspended for the first three games of the season. So you pile on, you pile on punishment when you look at history, and he has history dating all the way back to college for God’s sakes. Obviously it doesn’t apply in the NFL, but I don’t see how they can do anything but suspend him because it was not a football act. He didn’t lead with the helmet trying to break up a pass. He didn’t do that. This was just a dead, you know, cheap, intentional cheap shot. So to me, I’m like shocked if the NFL doesn’t maintain some leverage here and get rid of him for another couple of games.”

Since Pereira points out how far back this issue goes for Burfict, let’s take a look at a rough timeline of Burfict’s mistakes, fines, and misconduct.

July of 2009 – Before playing a single college game at Arizona State, Burfict fails to meet admission standards and isn’t qualified to play under NCAA rules until 2010.

October of 2010 – Just a couple months into his first college season, Burfict is benched by Sun Devils coach Dennis Erickson for his high number of personal foul penalties.

September of 2013 – Fined $31,000 for fouls and penalties that occurred during a Week 3 win over the Green Bay Packers. Those flags included striking a defenseless receiver and hitting an opponent in the groin.

October of 2014 – Panthers tight end Greg Olsen accuses Burfict of trying to injure him and quarterback Cam Newton. A couple days after the accusations, Burfict is fined $25,000.

January of 2016 – During the AFC Wild Card game against the Steelers, Burfict is flagged for a penalty with 18 seconds left in the fourth quarter, which helps put Pittsburgh in a position to eventually win the game. A couple days later, the NFL suspends Burfict for the first three games of the 2016 regular season for repeated violations of player safety rules.

October of 2016 – Burfict commits illegal acts against Blount and Bennett and is fined $75,000.

That’s a ton of poor misconduct, and frequent too. Burfict has been fined for some type of illegal play every season except his rookie campaign in 2012. In short, he needs to grow up.

The NFL continues to fine and suspend him and yet he keeps coming back to do the same thing. If Burfict wasn’t so good at his position, it’s likely the Bengals would’ve cut him loose and Burfict wouldn’t be in the league anymore. However, Burfict is good and despite the consistent suspensions, he keeps coming back for more.

Burfict, please grow up because a lot of people are tired of your act.

The fact that Vontaze Burfict wasn't suspended is everything that's wrong with the #NFL. Integrity of the game? Player safety? My arse.

On the day Vontaze Burfict is fined $75k for stomp of RB LeGarrette Blount, here in locker room Blount has a bandage on lower right leg.