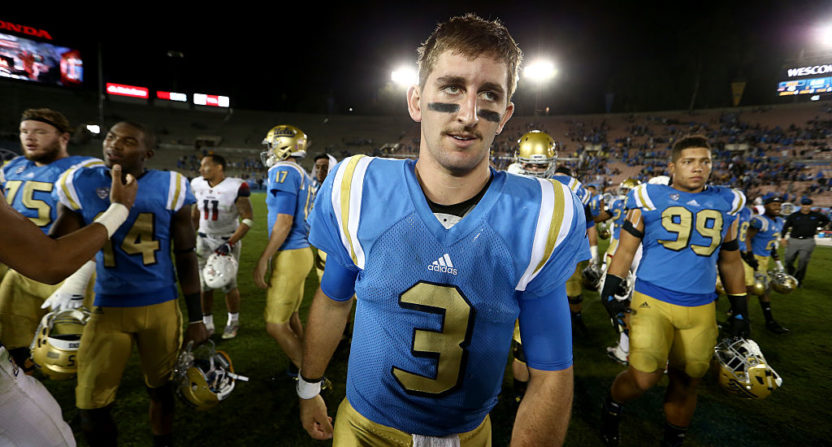 Josh Rosen is in a unique spot. He’s largely regarded as one of the two best quarterback prospects in a quarterback-heavy draft, yet hasn’t decided if he’ll even enter the 2018 NFL Draft.

Rosen could be the first QB taken come April, but that’s not a guarantee, given that the UCLA product isn’t the only QB being looked at as a possible top pick. USC third-year sophomore Sam Darnold beat Rosen this year and could be taken ahead of him. Don’t sleep on Wyoming junior Josh Allen, who one scout claimed a year ago will be the first pick this year to ESPN’s Adam Schefter. The last two Heisman winners, Lamar Jackson and Baker Mayfield, are also interesting pro prospects.

There are five great QB prospects that could be taken in the first round this year, but only one of them is handling this whole draft decision and process terribly.

His name is Josh Rosen.

Mel Kiper and Todd McShay both have Rosen listed as the No. 1 QB prospect in their rankings and McShay says he’s the best prospect overall.

But despite the glory and fame of being taken first overall, Rosen may not want to be.

The Browns have started more QBs than anyone could believe over the past 10 years, are on the brink of an 0-16 season, and will likely have two of the top five picks in the draft next year.

It’s understandable why Rosen wouldn’t want to play in Cleveland, but the way he is handling that possibility is terrible.

“I’d rather be a lower pick at the right team than a higher at the wrong team.”

Without saying it, one can assume Rosen is mulling his options for two reasons: He actually may want to go back to UCLA and play for Chip Kelly, or he just doesn’t want to play in Cleveland.

Still, Rosen may not even get drafted by the Browns, making this whole situation silly and stupid. As mentioned, the Browns potentially have two of the top five picks. It’s very likely Cleveland waits until its second first-round pick to take a QB since there are so many good options. It’s also possible they trade their top pick since a team that covets one of Darnold or Rosen could be willing to pay a bounty to the Browns to move up in the draft (much like they did two years ago so that the Eagles could take Carson Wentz).

It’s also entirely possible Cleveland doesn’t draft Rosen No. 1 overall simply because they like another quarterback more than him.

Rosen probably knows all of this, yet he is turning this process upside down in all the wrong ways.

All of this is understandable. I get not wanting to play for a terrible organization or possibly mulling a return since your school just hired a great coach. It makes sense.

If you haven’t noticed, no other QB prospect has been as outspoken about this draft as Rosen. Maybe that’s because the other QB prospects aren’t as highly regarded as Rosen. But there is a noticeable difference in silence between Rosen and the quartet of Allen, Darnold, Mayfield, and Jackson.

The better way for Rosen to handle this would be to take the same route as Allen, Darnold, Mayfield, and Jackson. Speak lightly and vaguely about the draft and don’t say things like…

“I’d rather be a lower pick at the right team than a higher at the wrong team.”

Additionally, don’t make a whole scene out of playing in the bowl game or not, especially if you ultimately don’t play because of a concussion. Rather than flip-flop between whether to play or not due to the draft, just come out and say it’s due to a concussion. Don’t let someone else do that for you.

We get it, Josh — you don’t want to play for the Browns. At this point, it might have been better if Rosen came out two weeks ago and said he refuses to play for Cleveland, yet is still declaring instead of everything he hasn’t said.

We can read between the lines and right now, they are awfully blurry due to Rosen alone and nobody else.