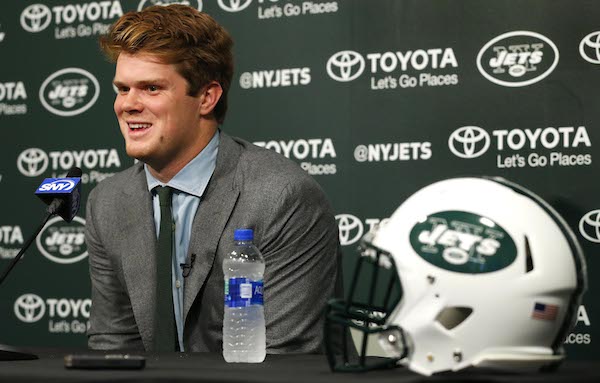 Heading into the 2018 NFL Draft, everyone knew there were going to be bunch of talented quarterbacks available in this year’s pool.

Well, it didn’t take long for some of them to land with a team as four quarterbacks were taken during the draft’s first 10 picks on Thursday night.

It looked like that would be it for signal callers in the first round after UCLA’s Josh Rosen was drafted by the Arizona Cardinals with the 10th overall pick. But then the Baltimore Ravens swooped in at the end of the round and added Louisville quarterback Lamar Jackson with Thursday night’s 32nd and final selection.

Of the five young signal callers selected in 2018 first round, which one has the the best chance for success in the NFL?

The least polished of the five and he might be the one that hits the field first. If he does, it could be a bad sign for the rest of his career.

Allen needs time on the bench to improve his poor mechanics and he may not be allowed to get that with the Bills. It’s extremely difficult for quarterbacks to last for a long time in the NFL if their career gets off to a poor start and this could end up being the case for Buffalo’s new signal caller.

When is the last time the Browns had a decent quarterback? There’s clearly something in the water out there in Cleveland and it seems to ruin any shot of a signal caller turning into anything but a laughing stock of the league.

Based on the recent history of this position for the Browns alone, Mayfield may have too much not going in his favor. He’s got the potential to be a good quarterback down the road, but being in Cleveland is likely going to have a negative impact on his chance of success.

Another player heading to a franchise that doesn’t have the greatest track record when it comes to quarterbacks. But unlike Mayfield, Darnold may actually be able to change those fortunes.

The former USC quarterback is capable of starting immediately, but he’ll likely get the luxury of sitting for at least a season while Josh McCown starts under center. Although McCown has been known to miss a few games each year due to injury, so Darnold could actually see some time on the field in 2018.

The Jets’ new quarterback is arguably the best signal caller they’ve ever drafted and he definitely has the chance to become the best quarterback to ever put on a New York uniform.

Just about every team passed up on the opportunity to draft Jackson this year (including the Ravens with their first pick) and it may be a move that most of them end up regretting.

It’s difficult for pro scouts to evaluate the former Louisville quarterback because he’s not really like anyone who’s ever played in the NFL before. This unknown is likely what contributed the most to Jackson slipping in the draft.

But Baltimore should be very happy to add a quarterback who accounted for 96 touchdowns (57 passing, 39 rushing) in his last two seasons at Louisville. Jackson will likely be the Ravens’ starter by 2019 and then the league will have to figure out how to deal with his ridiculousness.

Due to his running frequency, injury concerns could be the one thing that hold him back in the NFL. But if he can find a way to stay healthy, Jackson could blossom into one of the best quarterbacks the league has ever seen.

Like Darnold, Jackson, and Mayfield, Rosen will likely have a chance to sit back and learn during the majority of his rookie season. As is the case for Darnold, Rosen could also see the field in 2018 since the Cardinals’ presumed starter is expected to be the injury-prone Sam Bradford.

The former UCLA quarterback will have the most successful NFL career out of the five first-round signal callers due in large part to the team that selected him.

Rosen likely won’t have to put an entire offense on his back in Arizona. With players like running back David Johnson, cornerback Patrick Peterson, and defensive end Chandler Jones, the Cardinals already had a bunch of pieces in place to be successful before they even added the young quarterback on Thursday.

Arizona can plug Rosen into their offense in the near future and have a solid option at quarterback for a number of seasons. The young quarterback may not be happy that a bunch of teams passed on drafting him this year, but landing with the Cardinals should prove to be a blessing in disguise for him.

3 thoughts on “Which 2018 first-round quarterback will have the most successful NFL career?”