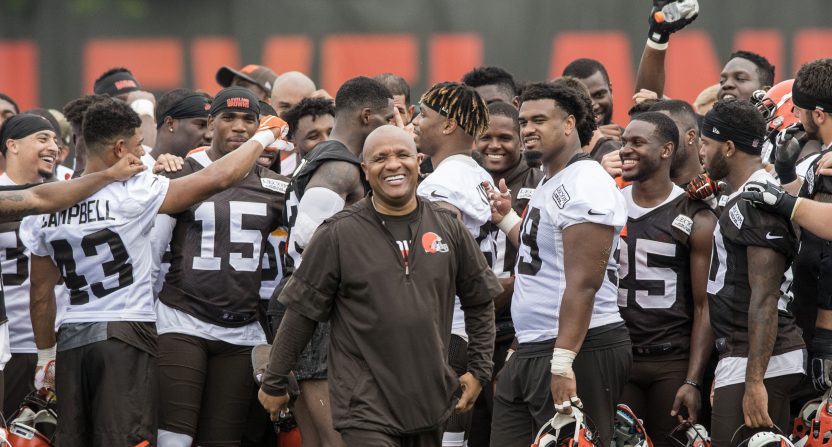 Rarely does an entire NFL season unfold without a head coach firing or two. Most come in the days that follow the regular season, but usually at least one coach is handed a pink slip before having a chance to finish the year.

Who are the top candidates to be canned first in 2018? Let’s break it down…

It’s pretty simple. Crazier things have happened, but you don’t typically hire a head coach and give him fewer than 16 games to make an impression.

Not going anywhere because they’re untouchable (8)

Belichick is the most successful coach in the history of the galaxy, Payton and Carroll are locked in as tenured figures and Super Bowl champs in New Orleans and Seattle respectively, Rivera is a two-time coach of the year coming off a playoff season, Zimmer has done too many good things in Minnesota, Pederson just won the Super Bowl, and Shanahan and McVay are wunderkinds coming off promising inaugural seasons. In fact, the latter was coach of the year at the age of 31.

Safe unless it really hits the fan (9)

McDermott led the Bills to the playoffs in his debut season, which is a big deal for that team. They hadn’t been there since 1773. Marrone also did big things with the historically lowly Jags in his first full season as their head coach. Lynn only goes if the Chargers really embarrass themselves and drop the ball again, Harbaugh will probably last the season regardless of how bad the Ravens are, ditto for Tomlin in Pittsburgh, McCarthy and Reid in Green Bay and Kansas City, respectively. Finally, the Jets appear to be exercising patience in general, and they gave Bowles a new contract in December.

Already on the hot seat (8)

These are the real contenders, and so they all require more words.

Gase: It all blew up (in a bad way) last season. If he can’t win with Ryan Tannehill back under center, he’s toast. That said, there might be some rope considering he made the playoffs in 2016 and is still working with a semi-gutted roster in his third season.

Joseph: John Elway is not a patient boss, and with Case Keenum and Bradley Chubb joining the fray, the expectation is Joseph will bounce back from a five-win maiden season. If the Broncos are out of contention in November or December, they probably won’t wait to fire him.

Koetter: Like Gase, he inherited a half-decent team, put together a strong initial season, and then it all came back to earth in 2017. Koetter’s problem is he’s probably tied to quarterback Jameis Winston, and it doesn’t appear as though they have much confident in Winston after an ugly offseason. Neither might not survive the fall.

O’Brien: He has an excuse for last year, but if Deshaun Watson and J.J. Watt are healthy and they can’t remain in contention throughout the 2018 season, O’Brien could get chopped. Still, it’s unlikely, considering he signed a new deal in January.

Lewis: He also (somehow) signed a new contract in January, but it was just a token two-year extension for a coach whose deal had expired. It’s amazing he’s still employed with the team, considering he’s won zero playoff games in 15 seasons there, but I could see the Bengals moving on in December if they’re out of it.

Garrett: No more Zeke Elliott excuses and they’ve got a window with Elliott, Dak Prescott, DeMarcus Lawrence, and an emerging secondary. I highly doubt Jerry Jones allows him to survive a ninth season without making a Super Bowl run. If they’re toast in November or December, Garrett could easily be fired.

Gruden: He’s under contract for three more years, but he’s made the playoffs just once and has yet to win a postseason game in four years with the Redskins. I think he would probably fall victim under the same circumstances as Garrett.

As you can see, I’m leaning Jackson or Koetter, but Gase is intriguing because the Dolphins should be terrible. I’m expecting big seasons from Denver and Houston, and I think the veterans Lewis, Garrett, and Gruden will likely be afforded more time.

The Vegas money is on Koetter, and considering that the Bucs have a deadly early schedule sans Winston, it’s hard to disagree.