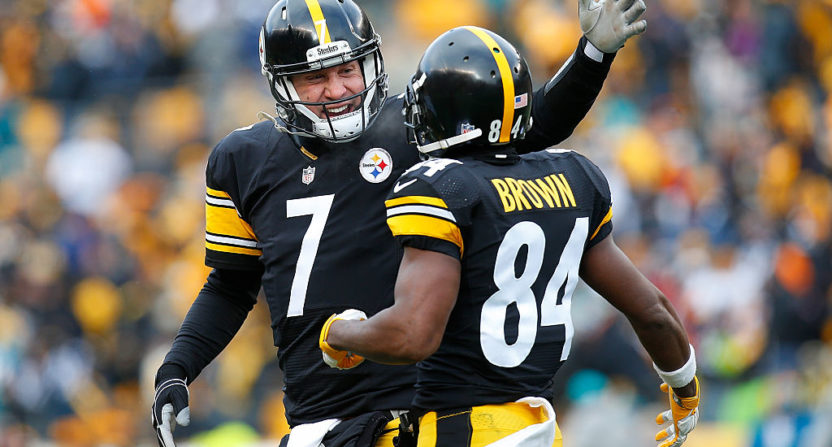 When it comes to having a great offense in the NFL today, being able to throw the ball well is becoming more and more vital. While some of the league’s top offensive units from a season ago had a mixture of a good rushing attack and a good passing attack, it was mainly a team’s passing skills that propelled their offense to higher levels.

Of the NFL’s top 10 scoring teams in 2016, seven finished the season with a top 10 passing offense and only five ended the year with a top 10 rushing attack.

Is a great offense the key to having a successful season? Well, the Atlanta Falcons and New England Patriots likely would not have made it all the way to Super Bowl 51 without each having one of the NFL’s top scoring offenses in 2016.

So which teams in the league will have an offensive unit that stands above the rest when the 2017 NFL season is all said and done?

The rich apparently do get richer, as was the case for the Patriots this offseason. After winning the franchise’s fifth Super Bowl last season, New England added a bunch of new weapons to their offensive arsenal as the team is looking to become the first back-to-back Super Bowl champion since 2004 (when the Patriots did it, of course).

Despite the fact that he will be 40 years old in August, New England quarterback Tom Brady has shown no signs that would indicate his performance level is heading in a downward direction. He will have some new faces to throw to in 2017, as the Patriots were able to add wide receiver Brandin Cooks and tight end Dwayne Allen to their roster this offseason.

With the additions of running backs Mike Gillislee and Rex Burkhead, New England’s backfield for this year may also be even more versatile than it was in 2016.

Combine all the newest members of the Patriots’ offense with the usual suspects in Julian Edelman, Rob Gronkowski and Dion Lewis, and there is no reason to think that New England’s offensive unit will not be among the NFL’s best once again this season.

Matt Ryan slings it to Austin Hooper for the TOUCHDOWN to give the Falcons a 14-0 lead in the second quarter #RiseUp pic.twitter.com/fpJw60bkRm

In 2016, the Falcons’ top-ranked scoring offense propelled them all the way to a matchup with the Patriots in Super Bowl 51, which they would have won if the game ended after the third quarter. If Atlanta has hopes of redeeming themselves from last year’s debacle, they will have to do it without Kyle Shanahan as their offensive coordinator.

Shanahan took an opportunity to be the head coach for the San Francisco 49ers and the Falcons have replaced his spot on the coaching staff with former USC head coach Steve Sarkisian.

If he is smart, Sarkisian will not change much to what Atlanta was running on offense last year. Their methods from 2016 led the team to having one of the NFL’s most dangerous offenses. With all 11 of their starters on offense also returning for a second straight season, the Falcons maintaining their standing as one the league’s top offensive units in 2017 would be surprise to virtually no one.

Since the Bucs are this year’s focus of HBO’s Hard Knocks, prepare for an onslaught of hot takes declaring that Tampa Bay will be this season’s most improved team. But unlike past teams that were featured on Hard Knocks, the hype that will surround the Bucs before the start of the regular season is actually legitimate.

Tampa Bay has a young, stud quarterback in Jameis Winston, who is coming off a year in which he shattered a number of franchise passing records. In addition to Mike Evans, Winston has a bunch of new weapons to choose from this year including wide receivers DeSean Jackson and Chris Godwin and rookie tight end OJ Howard.

With a potentially lethal passing attack and a trio of talented running backs (Doug Martin, Charles Sims, Jacquizz Rodgers), the Bucs’ offense should cause their opponents to have a lot of sleepless nights in 2017.

? is ?@AntonioBrown came up clutch for the @steelers in Week 16 with a division-winning touchdown! ?#PlayOfTheDay pic.twitter.com/mSBGBj6cYY

It seems like during the past three offseasons, the Steelers are predicted by many to have the NFL’s top offense for the upcoming season. However, injuries to key players in recent years have prevented Pittsburgh from fully capturing the crown as the league’s absolute best on offense.

So will this be the year that Pittsburgh lives up to expectations and becomes the offensive juggernaut that everyone knows they are capable of being?

Already having one of the NFL’s top offensive trios in quarterback Ben Roethlisberger, running back Le’Veon Bell, and wide receiver Antonio Brown, the Steelers will have a few more playmakers on offense this season that are fully capable of being big-time difference makers.

Among those being wide receiver Martavis Bryant (returning after a year-long suspension), rookie pass catcher JuJu Smith-Schuster, and rookie running back James Conner. If the majority of Pittsburgh’s weapons can remain healthy throughout the season (big if), then 2017 could finally be the year that the Steelers end a year atop the league’s offensive mountain.

As long as the Packers have quarterback Aaron Rodgers out on the field, their chance for a day of offensive dominance is always going to be high. Not many quarterbacks in the NFL could do what Rodgers does so consistently without having an arsenal of weapons on offense.

Yes, Jordy Nelson and Randall Cobb are above average receivers, but Green Bay was able to score the fourth-most points in the league last season with four different players starting at least one game at running back.

This year, the Packers added free-agent tight end Martellus Bennett and rookie running back Jamaal Williams to the mix. But as stated before, as long as Rodgers is in the lineup, Green Bay will likely have one of the NFL’s top offenses regardless of who else is on the field.

It is a bit astonishing to see that the Chargers were able to end the 2016 season as a top 10 scoring offense despite the fact that some of their best playmakers were lost for a majority of the year due to injuries. Philip Rivers and company were still able to put points up on the board without having Keenan Allen, Stevie Johnson, Brandon Oliver, and Danny Woodhead on the field for most of the season.

Moving on to this year, Los Angeles will be welcoming back Allen to their lineup and now have a new pass-catching rookie on the field in former Clemson wide receiver Mike Williams. Combine that with a nice tight end duo of Antonio Gates and Hunter Henry and last year’s touchdown machine running back Melvin Gordon, and scoring points should come pretty easily for the Chargers in 2017.

Oh, and that Rivers guy is pretty good too. Especially when he breaks out the bolo tie.

After finishing the 2015 season as a top 10 scoring offense, the Bengals struggled to get points last year and it led to the team missing the playoffs for the first time since 2010. So this offseason, Cincinnati spent their first two selections in the draft on wide receiver John Ross and running back Joe Mixon.

The two Bengals rookies combined for 32 touchdowns in college last year and the team is hoping they can have similar results this season.

Even without the additions of Ross and Mixon, Cincinnati would still have a potentially, explosive offense in 2017. But with the rookies added to a roster that is already full of playmakers like A.J. Green, Tyler Eifert, Giovani Bernard, and Jeremy Hill, the Bengals could be back to lighting up the scoreboard this season.