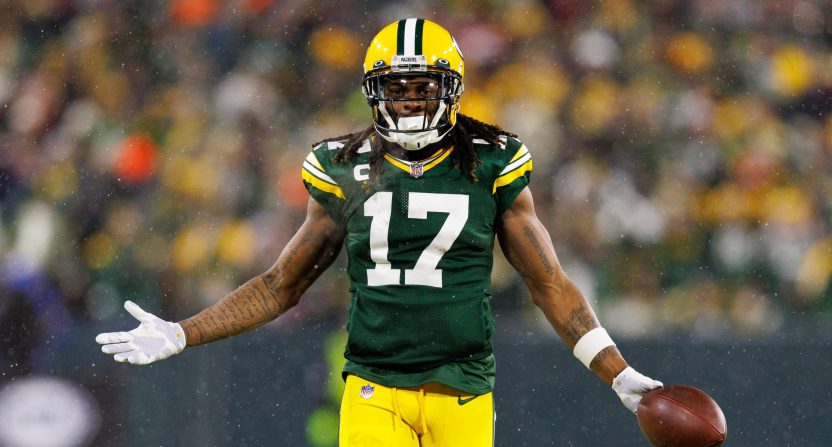 A wild NFL off-season included several big-name wide receivers switching teams. Here’s a look at how some of them might fare:

Reason for optimism: Davante Adams is the most complete receiver in the NFL. He makes catches going long, over the middle, in traffic, and scores. Over the past three seasons, he has 34 receiving touchdowns. Only Tampa Bay’s Mike Evans has more (35). And he did so despite not having much help from the rest of Green Bay’s receiving corps.

Reason for pessimism: Not much. Derek Carr isn’t Aaron Rodgers, but he’s a very good quarterback who got off to a torrid start last year until Jon Gruden was forced out and Henry Ruggs III was released. New Las Vegas head coach Josh McDaniels has to prove himself after his disastrous stint with Denver, but that was over a decade ago.

Prediction: Reuniting with his ex-Fresno State QB should help Adams transition smoothly. Any drop in production will likely be minor.

Some of the finest route running in the league is coming to Vegas 🍿@tae15adams | @raiders pic.twitter.com/6ts4XmEmlO

Reason for optimism: There’s no more explosive playmaker at wide receiver than Tyreek Hill. Since entering the NFL in 2016, he has a league-best 13 touchdowns of 50 yards or more. His game-changing speed forces defenses to be cautious – and sometimes that isn’t even enough. The Buffalo Bills found this out in last year’s playoff loss.

Reason for pessimism: Hill is leaving a premier quarterback and playcaller. Patrick Mahomes and Andy Reid had a lot to do with Hill’s success. Now he joins a franchise with a suspect quarterback (Tua Tagovailoa) and a rookie head coach (Mike McDaniel). Hill keeps praising Tagovailoa’s accuracy and maybe that will be a factor with a better offensive line.

Prediction: The Dolphins are starving for big plays, and Hill will deliver some, but it’s hard to believe he’ll be as productive.

The #Bills were so scared of what Tyreek Hill did on this play that on the next drive on defense, although there were only 13 seconds, the played way off which allowed the #Chiefs to drive for a FG and go to overtime to win the game.pic.twitter.com/XZ0x9LtAii

Reason for optimism: Dak Prescott became a better quarterback the moment Amari Cooper joined the Cowboys in 2018. Cooper would likely still be with Dallas if not for salary cap problems (blame Ezekiel Elliott’s contract.). Cooper runs great routes and is still explosive after the catch. Cleveland got a No. 1 receiver for a fifth-round pick.

Reason for pessimism: Cooper is coming off his second-worst season. Some of that could have been caused by Prescott, who was not the same after suffering a calf strain in October. Still, Cooper did not have a 100-yard game after Halloween. During that stretch, he had four games in which he was targeted 5 times or less.

Prediction: Assuming last year was an outlier, Cooper could be effective for the Browns even if Deshaun Watson misses games due to suspension.

Top 10 in the NFL in receptions, receiving yards, and receiving TDs since being traded to Dallas. What a Cowboys career for @AmariCooper9. ⭐️ pic.twitter.com/Kp27hvXnrw

Reason for optimism: A.J. Brown, 24, should be entering his prime. He’s a physical marvel who can overpower and outrun most defensive backs. He gives the Eagles an elite receiver who should make the rest of the offense —  including second-year wideout DeVonta Smith and third-year quarterback Jalen Hurts — a lot better. Brown is also a good run blocker.

Reason for pessimism: After a great start to his career, including a fabulous second year, Brown’s numbers tailed off slightly. He had surgeries on both knees in January 2021 and ankle issues caused him to miss four games. It might be a minor concern, but it bears watching. He has struggled occasionally when he can’t out-physical a defender.

Prediction: If his injury troubles are behind him, this could be the most impactful addition in the NFC East.

Reason for optimism: JuJu Smith-Schuster is only 25. The Chiefs tried to sign him last year, but he chose to return to Pittsburgh on a one-year deal. He probably would have made a difference playing alongside Tyreek Hill. Now, he’ll be asked to help replace some of the production lost from the trade of Hill.

Reason for pessimism: Smith-Schuster’s best seasons were his first two. His numbers shrunk the moment Antonio Brown left. You could attribute some of that to the decline of Ben Roethlisberger. The Steelers’ quick-passing game due to Roethlisberger’s diminishing skills hurt Smith-Schuster, who averaged 8.6 yards per catch in 2020. The slot receiver missed most of last year with a shoulder injury.

Prediction: The Chiefs don’t have a true No. 1 receiver. It’ll take a group effort to replace Hill. Mahomes could help Smith-Schuster enjoy his best season since his second year.

New #Chiefs WR JuJu Smith-Schuster and Patrick Mahomes are getting some work in together down in Tyler, Texas. (video via @coachfrogg's Instagram story). pic.twitter.com/XxMGiXlSwX

Reason for optimism: Allen Robinson must feel like he’s been let out of detention. Handicapped by bad quarterbacks and bad playcalling, he still managed impressive numbers. Over his career, the best quarterback he has played with is Blake Bortles in Jacksonville (ugh). Catching passes from Matthew Stafford in a Sean McVay offense will seem like a vacation.

Reason for pessimism: Will he be happy as a No.2? Cooper Kupp will get most of the targets, and Van Jefferson was extremely productive as the No. 3. Robinson will occupy the position vacated by Robert Woods and Odell Beckham Jr., who fit in nicely during the Rams’ run to the Super Bowl.

Prediction: Robinson is probably an upgrade over Woods and Beckham. With Kupp drawing double teams, he’ll have his chances.

The Rams are adding Allen Robinson to the offense. What a get for the McVay and QB1 Stafford! One of the most underrated receivers in the league. Stafford loves receivers who can make contested catches and go up and get 50/50 balls, this is Robinsons game! pic.twitter.com/LAhgJumpNK