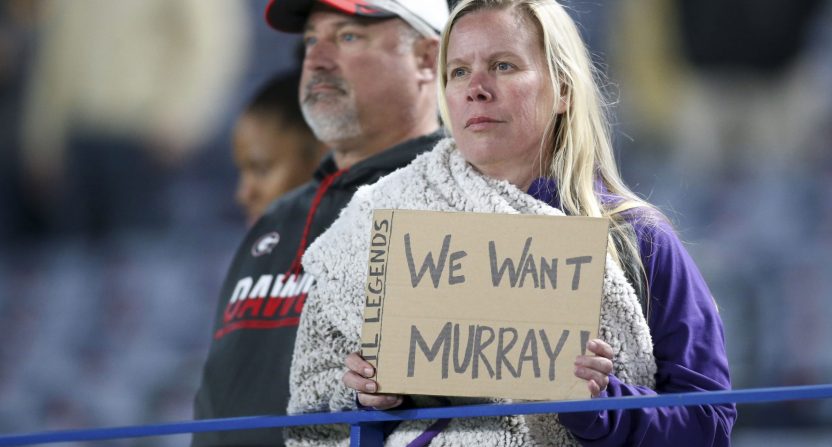 The NFL’s season culminates on Sunday with Super Bowl LIV between the San Francisco 49ers and Kansas City Chiefs. But just as it’s time to put away your NFL shield caps (looking at you, Rob Lowe), it’s time to replace them with your XFL logo caps as the newish-old football league begins its “first” season the following weekend.

There will be plenty of eyes on the action as the XFL’s eight teams take the field for the first time, but there will probably plenty more people sitting back and wondering whether or not this alternative football league is the one that will finally stick. The original XFL went bust after one season and the AAF infamously didn’t even make it to the end of it’s one and only season.

If nothing else, the XFL will be a curiosity for football fans looking to scratch an itch during what is normally the offseason. Chances are most of them haven’t been paying close attention to the teams, coaches, and rosters as the season approached. But now that we’re here and viewers need reasons to be intrigued, let’s try to find good reasons to tune in based on the most obvious of connections…college football fandom.

A reminder of the teams you’ve got to choose from. The Western Conference consists of the Dallas Renegades, Houston Roughnecks, Los Angeles Wildcats, and Seattle Dragons. The Eastern Conference includes the DC Defenders, New York Guardians, St. Louis BattleHawks, and Tampa Bay Vipers. There is also something called Team 9, which is made up of players who will be practicing and ready to be “called up” at any time.

LSU Tigers fans should root for the…DC Defenders. There are 10 LSU alums in the XFL right now but only one team has two of them on their roster. That would be DC, which boasts WR Malachi Dupre, RB Nick Brossette, and DE Sam Montgomery.

Clemson Tigers fans should root for the…Houston Roughnecks. There are only three Clemson players currently on XFL rosters and they’re split between three different teams. We’re gonna go with the Roughnecks, who feature defensive end Corey Crawford, the most high-profile of the three Tigers alums.

Alabama Crimson Tide fans should root for the…Houston Roughnecks. The Tide only has two former players in the league. The Defenders have cornerback Brandon Sylve while the Roughnecks have corner Saivion Smith. We lean towards Houston if only because it makes more sense geographically.

Oklahoma Sooners fans should root for the…Dallas Renegades. As much as it might pain them to root for a Texas-based football team, the Renegades boast a lot of Sooner tie-ins. Most notably is their head coach and GM, Bob Stoops. It’s also very possible that the starting quarterback will be former Sooner standout Landry Jones. The roster also includes wide receiver Jeff Badet and defensive end Frank Alexander.

Ohio State Buckeyes fans should root for the…DC Defenders. There are three Buckeyes in the XFL right now and all of them are on the Defenders roster. That includes Cardale Jones, who quarterbacked OSU to the national title in 2014. Joining him on the team is cornerback Doran Grant and defensive tackle Tracy Sprinkle.

Michigan Wolverines fans should root for the…Seattle Dragons. As much as it might pain former 49ers head coach Jim Harbaugh, three of his guys will be suiting up in Seattle this season. They include offensive guard William Campbell, cornerback Channing Stribling, and cornerback Jeremy Clark.

Florida Gators fans should root for the…St. Louis BattleHawks. There are quite a few Florida players in the XFL, including two linemen on the home-state Vipers. But we’re suggesting the BattleHawks, whose roster includes running back Matt Jones and safety Will Hill. It’s two playmakers that will give Gator fans more chances to see touchdowns (or interceptions, as it were).

Georgia Bulldogs fans should root for the…Tampa Bay Vipers. Former Georgia quarterback Aaron Murray refuses to give up on the dream and he’ll make his latest attempt to continue playing here in Tampa. Murray played for the Atlanta Legends in the AAF but he’s probably hoping he gets to spend a bit more time in Tampa than he did there. The Vipers also include two other former Bulldogs, corner Corey Moore and long snapper Nick Moore.

Syracuse Orange fans should root for the…Dallas Renegades. Eric Dungey, considered by many Orange fans as the school’s best quarterback since Donovan McNabb, is getting a shot with the Renegades. It’s unclear how much he’ll play given that he was dealing with a leg injury for much of camp and he’s competing against Landry Jones. But if he puts his head down and pushes through, a hallmark of his time at SU, he could make Syracuse fans very happy once more. It should also be noted that Shamarko Thomas is suiting up for the DC Defenders…

Auburn Tigers fans should root for the…Houston Roughnecks. There are Auburn guys on six of the eight rosters right now so rooting allegiances are all over the place. We’re picking Houston because they feature WR Sammie Coates and DL Gabe Wright, which gives Tiger fans something to root for on both sides of the ball.

Florida State fans should root for…the Tampa Bay Vipers. It makes a lot of sense geographically and also because it’s the only squad with multiple Seminoles on the roster. The Vipers include RB Jacques Patrick and DB Tarvarus McFadden.

Penn State fans should root for the…New York Guardians. Penn State fans remember Matt McGloin and they’ll only have to drive a few hours to go see this Pennsylvania product quarterback the Guardians this season.

There are obviously many more colleges and many more players to pick and choose from but this should at least give some fans a chance to narrow their focus in the coming weeks as they get caught up in the excitement that (we can only hope) is XFL football.