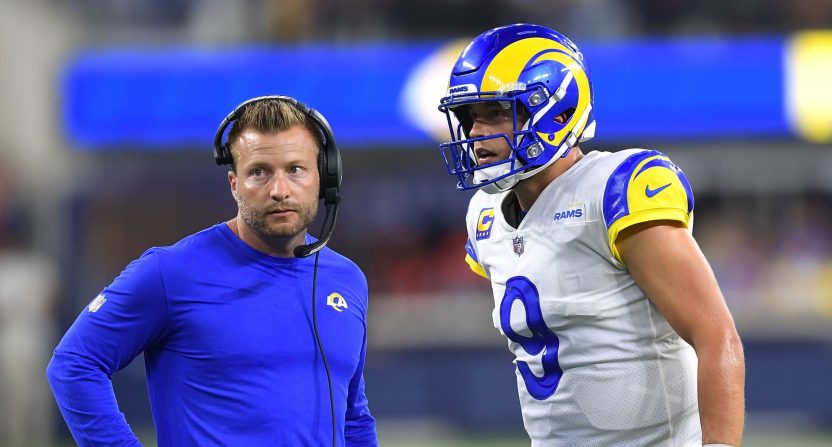 If the Los Angeles Rams were an NBA team, their swashbuckling moves would be considered bold but hardly unusual. But because they’re an NFL franchise, everything they’ve done in recent years feels revolutionary. Like a gamer who has suddenly discovered a cheat code.

In a league that doesn’t produce many blockbuster trades, you generally don’t see many moves like these. Certainly not from one team. In the span of over two years, they’ve made three earth-shattering deals in pursuit of a Super Bowl trophy. In October 2019, they traded for cornerback Jalen Ramsey. In January 2021, they traded for quarterback Matthew Stafford. Earlier this week, they traded for linebacker Von Miller.

Say what you want about the Rams. They’re not boring. It’s one thing to be aggressive. It’s another thing to be this ambitious with an utter disregard of the future. Who cares about tomorrow? Head coach Sean McVay and general manager Les Snead have shoved their poker chips to the center of the table. The Rams are all in. They’re in it to win it now.

Every team says every year they’re going after a championship. But not every team has done so this explicitly.

Why trading for Von Miller means the Rams are going to have a very quiet draft https://t.co/wLWvFdVGyn pic.twitter.com/aG2jbiLxxd

The Rams have mortgaged a ton of draft capital in hopes of winning the Super Bowl. The latest move was the acquisition of Miller, costing them second and third-round picks in the 2022 draft. When you include the deals for Stafford and Ramsey, it’s remarkable.

L.A. doesn’t own a first-round pick in the draft until 2024. They haven’t had a first-round selection since 2016. In April, the Rams will have only four draft picks, and none until the third round. Bold strategy. Let’s see how it works for them.

Among the four major sports leagues, the NFL’s draft has the most value. There are numerous reasons for this. First, in a salary-cap sport, cheap labor is essential. NFL players are least expensive when they’re on a rookie deal. Also, the career of the average NFL player is 3.3 years. The league needs to constantly replenish its workforce with young athletes.

NFL teams covet these picks. That’s how you build your roster. It’s one of the reasons you don’t see many blockbuster player trades. But there is a risk. Think of these picks as investments. Over the long haul, it’s good to have as many as possible, however, there are no guarantees of a return on an individual investment. The success rate on first-round draft picks is roughly 55 percent. Some will be talented players, dependable to above-average starters. Some will be disappointing role players or flat-out busts.

What the Rams are doing is interesting. Makes you wonder if they have unearthed a market inefficiency in talent acquisition. Perhaps first-round picks are overvalued. L.A. is trading away unknown commodities for known ones. They know how good guys like Stafford, Ramsey, and Miller are. They know they’re getting players who can help them win immediately. They have no idea if those future draft picks will become solid starters.

So why not prioritize the known over the unknown? Seems smart and will look even smarter if the Rams reach the Super Bowl. Of course, there are future salary ramifications to these moves. In 2022, L.A. will have the sixth-least amount of salary cap space (Only $8.5 million available). But again, the Rams will worry about next year next year.

Matthew Stafford is dissecting the Texans…

The Rams are trying to build a winning momentum. This is their first season with fans in SoFi Stadium, which opened in 2020, but was mostly empty last year due to the pandemic. They’re trying to grow their fanbase since leaving St. Louis after the end of the 2015 season. The time is now, and L.A. has all the pieces in place for a Super Bowl run.

The biggest concern might be the overall strength of the NFC. It’s a top-heavy conference with the Rams, the Green Bay Packers, the Arizona Cardinals, the Dallas Cowboys, and the Tampa Bay Buccaneers all vying for the No. 1 overall seed. In a 17-game regular season, home-field advantage and a first-round bye will be critical.

L.A.’s moves have paid off so far. Stafford is not only a significant upgrade over Jared Goff; he’s an MVP candidate, ranking second in the league in touchdown passes (22), yards per attempt (9.1), and passer rating (118) for the NFL’s fifth-highest scoring offense (30.6 points per game). Their defense (10th in points allowed (21.0 per game) hasn’t been as dominant, but the addition of Miller, a former Super Bowl MVP, should help.

“He brings an element,” McVay said. “Obviously an incredibly unique football player that not only is a great pass-rusher, but he’s a complete football player that can really affect and influence an offense in a negative way on all three downs. You can utilize him in a variety of different ways.”

The Rams have shown us a different way of doing business. If it results in a Super Bowl, it’ll be interesting to see if other teams will be just as aggressive in the future.