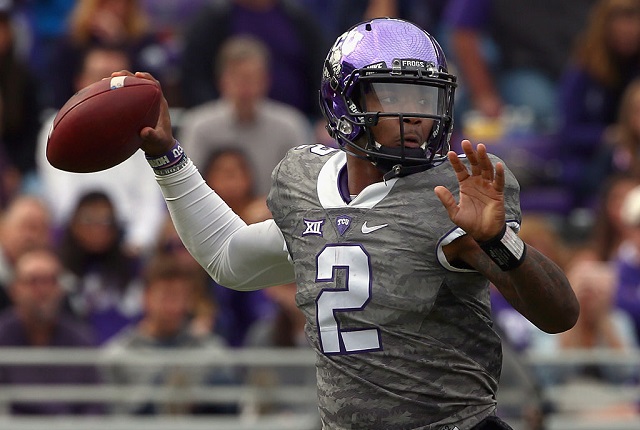 Some NFL teams are asking Trevone Boykin to switch to wide receiver in the NFL, which, in my opinion, is preposterous. Why? Because Boykin is one of the top quarterback prospects in the 2016 draft class.

No hyperbole here. It’s legitimately just a sincere opinion I formed after watching film of all the top draft-eligible signal-callers.

Instead of defending my somewhat obscure rankings, this column is dedicated to supporting my stance that Boykin is one of the best quarterbacks this class has to offer. Actually, before I begin, I want to touch on the justified off-field concerns with Boykin, which will almost assuredly have a larger impact on his draft stock than any game he ever played for the Horned Frogs.

Before TCU’s bowl game against Oregon, Boykin was arrested and charged with a felony after he struck a police officer, who had arrived on the scene of a bar fight that reportedly began when patrons recognized Boykin and trash-talked him. He was also charged with resisting arrest and public intoxication.

Given the seriousness of this incident and the NFL’s recently more stringent handling of cases involving violence, Boykin very well could be completely off the draft boards of many teams. Everything written below is purely centered around my thoughts of him from an on-field perspective.

Being an ultra-athletic quarterback with legitimate linebacker-juking agility usually comes with the preconceived notion that you simply can’t throw the football all that well. If you’re lacking height too… you’re really up against it.

Short, magical scramble-drill improvisers, who struggled from the pocket, like Kordell Stewart, Michael Vick and Johnny Manziel, along with an assortment of college stars who never made it as pros, have severely damaged the perception of the twitchy, sub-6-foot-3 athlete playing quarterback in the NFL.

However, the 6-foot, 212-pound Boykin is an accurate, productive passer. Here’s a chart I made from Pro Football Focus’ Draft Guide on some of the consensus top quarterbacks in this year’s class.

*Accuracy Percentage’s formula is (Completions+Drops) / (Attempts-Throwaways-Spikes-Batted Passes-Hit As Thrown). It’s a much better indicator of a quarterback’s accuracy than completion percentage.

Based on the hype surrounding the 2016 quarterback crop, this chart should be surprising with Lynch leading the way and Boykin in a tight cluster with Prescott, Goff, Jones and Wentz. Two weeks out from the draft, the latter is the favorite to be the first quarterback taken.

Accuracy Percentage doesn’t take into account pass depth, which obviously plays a role in how difficult it should be to make an on-target throw. Assuming we don’t have to commit much worry to accuracy on super-short passes, let’s take a look at how each quarterback performed on the down-the-field tosses, which clearly have a higher degree of difficulty:

Plenty of striking information here, don’t you think? Lynch had the highest completion percentage in this passing range but only attempted 11 passes of 30+ yards all season. Wentz amassed some freaky-bad downfield statistics, especially for a quarterback with a monster arm. Boykin’s figures are definitely the most impressive of the entire group, as he showed a willingness to take deep shots and was relatively accurate completing them.

Maybe due to the exponential rise in short, YAC-predicated, West Coast offenses in today’s NFL, you don’t think deep passing is all that important anymore. Fair enough. All good. How about passing accuracy under pressure? We all can agree on its importance, right? Check out how the big-name quarterback prospects stacked up here:

Once again, Boykin can be found near the top.

Boykin’s game doesn’t come without flaws, however. Just like Goff, Wentz, Cook, Prescott, Hogan, Hackenberg and the rest of this year’s quarterback prospects, he has accuracy hiccups — his most frequent miss is high — and he failed to read a roaming zone defender on a few of the 10 interceptions he threw in 2015. However, strictly from a refined skill-set angle, there’s so much to like with Boykin… the quarterback.

Whether it’s the often disregarded but critical leading of a running back on a swing pass to the flat, zipping a stop route to the back shoulder near the sideline, firing a slant low and away from a trailing corner, or putting ideal arc on a deep ball, Boykin demonstrates precise ball placement at all levels of the field on the majority of his throws. Sure, he has more downfield misses than anything else but shines in that area overall, as evidenced by the deep-passing chart.

Boykin’s frequent full-field scanning is probably the most noticeably advanced aspect of his passing prowess. It’s also what sets him apart and ahead of Lynch, who is drastically limited as a full-field reader, largely because he operated a one-read, screen-heavy offense at Memphis. For as much as the quarterback position demands from a player physically, it arguably asks more of him mentally, and it takes poise to scan the entire field and make accurate throws to second and third reads.

Boykin consistently hit his first read if open, but a handful of completions to his secondary and tertiary targets can be found in every 2015 game. He was specifically adept at firing a strike to the backside slant or dig after originally looking in the opposite direction.

His arm isn’t Wentz, Lynch or Jones caliber… it’s comparable to Goff’s, seemingly strong enough to earn an above-average/ strong label and capable of firing a pass 30 yards down the seam or slinging it 60 yards.

Beyond battling the running quarterback stereotype, Boykin has to fight another, albeit more unique, draft deterrent. He had the luxury of throwing to an elite receiver prospect while at TCU, which undoubtedly helped in the stat book and win column but likely isn’t benefiting him now. Josh Doctson’s high-pointing, body-contorting catches created one hell of a highlight reel for the probable first-round wideout, yet his jump-ball dominance likely hurt the initial perception of Boykin’s accuracy. In reality though, many of Doctson’s power forward-esque grabs happened on gorgeously placed passes just out of the reach of coverage.

Another encouraging piece of evidence suggesting Boykin’s arrow is pointing up: his annual improvement at TCU. A starter since his first year in 2012, Boykin’s completion percentage rose every season. His yards per attempt and quarterback rating increased in each of his final three campaigns:

I’ll finish with the aspect of Boykin’s game that he undeniably does better than any quarterback in the 2016 draft: make defenders miss with his feet. He’s eerily similar to Tyrod Taylor, eluding oncoming pass-rushers in the backfield to create space to throw and when he’s running beyond the line of scrimmage. Boykin has dynamic quickness, sudden start-and-stop talent, and a little speed to turn on the jets on designed runs.

As his career progressed at TCU, he became much more of a “run-when-necessary” quarterback as compared to the “run-when-nervous” quarterback he was as a freshman and sophomore, much like the development Taylor displayed at Virginia Tech. On his 2015 film, Boykin appeared to pull the ball down and take the “easy” six- to- eight-yard scramble instead of forcing the football into air-tight coverage.

Ultra-athletic quarterbacks who can’t win from the pocket — particularly after their first read is covered — will flop in the NFL. Ultra-athletic quarterbacks who can win from the pocket, and use their mobility to extend plays, scramble for a few yards when nothing’s there, and occasionally keep a read-option handoff, can thrive in the NFL. Heck, the backyard, run-around element for Russell Wilson, Aaron Rodgers, Cam Newton, Tony Romo, Ben Roethlisberger, Alex Smith has been an integral piece of their success as professionals.

Boykin was almost unfathomably elusive in just about every game when trying to buy time and space for himself as a passer or, as a last resort, when he saw an opportunity to pick up a sizable chunk of yardage. Like Taylor in 2011, Boykin will likely continue to be overlooked through draft weekend and get picked in one of the later rounds, if at all. But also like Taylor, Boykin’s underrated and annually improving passing proficiency coupled with his supreme athletic gifts will ultimately make him one of the finest quarterbacks from his draft class.