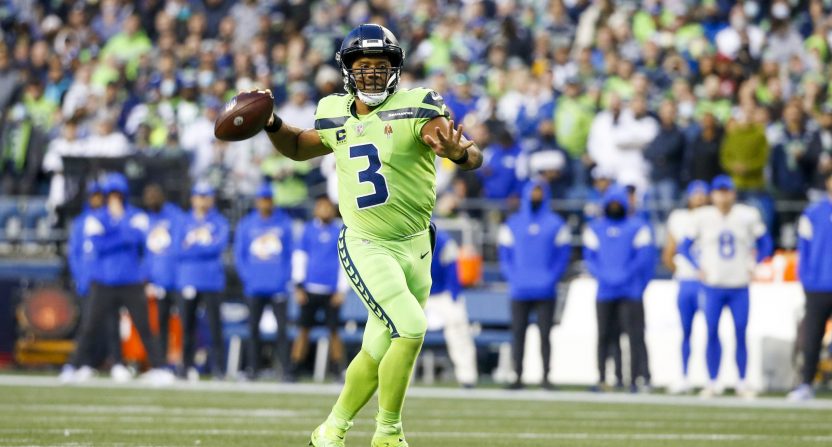 Russell Wilson exited the Seattle Seahawks’ loss to the Los Angeles Rams on Thursday night with a finger injury on his throwing hand. On Friday, it was reported that the Seahawks are “bracing” for Wilson to miss at least a month and up to eight weeks with a torn tendon on his middle finger. The injury is likely to require surgery (Update: Wilson had surgery and is expected to be out “roughly six weeks,” according to Ian Rapoport of NFL Network).

It’s a huge blow to the Seahawks, who are now 2-3 (which is last place in a loaded NFC West). And while nobody is going to celebrate injuries, Wilson’s absence is a big break for the rest of the NFC West, Seattle’s upcoming opponents… and the New York Jets.

It goes without saying why Wilson being sidelined is a big break for the NFC West and teams that play the Seahawks in the coming weeks. But the Jets?

That’s because the Jets own the Seahawks’ first-round pick in 2022, as part of the trade that sent safety Jamal Adams from New York to Seattle in 2020. New York also received Seattle’s first and third-round picks in 2021, while the Seahawks received the Jets’ 2022 fourth-rounder.

If Wilson is indeed out four-to-eight weeks, that 2022 pick acquired from Seattle could end up being a top-10 pick for the Jets.

Geno Smith did a fantastic job in relief of Wilson on Thursday night, but Jets fans know more than anyone how difficult it will be for a flawed Seahawks roster to win games with Smith as the starting quarterback. This Seattle team has already lost three games despite Wilson throwing 10 touchdown passes and one interception, while having the league’s best passer rating at 125.3. Even if Smith performs admirably, it’s still a huge drop-off from Wilson.

It doesn’t help things for Seattle that Adams — the NFL’s highest-paid safety — hasn’t played very well this season, and mistakes he made on Thursday night factored into the Seahawks’ loss.

Whatever the Seahawks are doing with Jamal Adams since they traded 2 first-round picks for him, it's not working. His performance is down across the board considerably since leaving the #Jets. They need to figure this out and figure it out quickly. #TakeFlight pic.twitter.com/2Z042IOc4E

Trading Adams was surely a difficult choice for New York at the time, but it’s ended up being the slam-dunk right move for a rebuilding franchise. It’s very possible that the Jets end up with two top-10 picks in the 2022 NFL Draft.