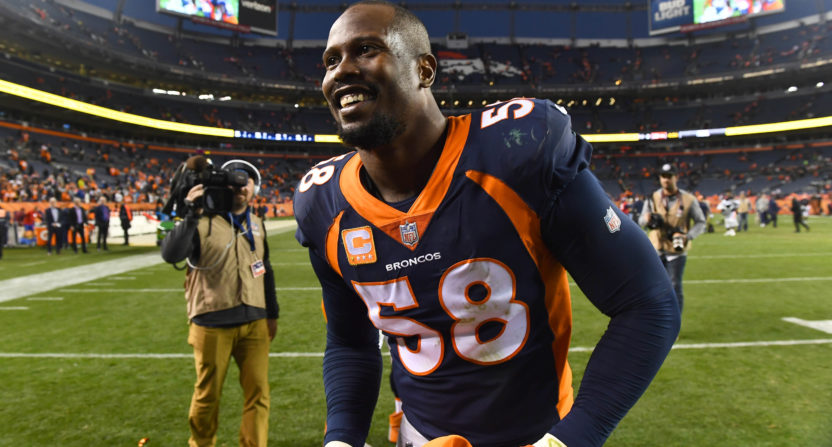 Comp update: Rams are sending the Broncos a second- and third-round pick in the 2022 draft in exchange for eight-time Pro Bowl LB Von Miller, per sources

Miller missed all of last season with an injury, but the 32-year-old edge rusher has had a very solid start to the 2021 season, tallying 4.5 sacks in seven games for the Broncos. This isn’t a case of at team with no playoff hope tanking, either; the Broncos are currently 4-4, which isn’t out of the picture in a crowded AFC.

But they’re also being realistic; Denver likely doesn’t have the roster to make any kind of deep playoff run even if they did manage to make it in. Miller is a free agent after the season, and at 33 would likely have left for a more immediate contender anyway. The Broncos paying down a lot of his remaining salary also helped facilitate the deal, and possibly sweetened their return, too.

As part of the trade, the Broncos are paying $9 million of Von Miller’s remaining $9.7 million salary, per sources.

As for the Rams, they’ve already sent out a ton of draft capital for this upcoming year. Adding two more picks here means that, barring further transactions that somehow bring picks back (which feels unlikely until after the season at the very least), the draft room is going to be a pretty sleepy affair next spring.

At a certain point, it might make sense to just trade everything and save the time and effort.

The Rams going all-in on this season makes sense, though. They’re currently 7-1, in a race for the top seed in the NFC, and Matthew Stafford is both 33 and only under contract through next season. This is absolutely a championship window, basically the exact sort of team situation where it makes sense to essentially blow an entire draft class on veteran external acquisitions.

The Broncos, meanwhile, pick up some very solid picks, send a franchise legend to a contending team in a great market with a big payout in the process (treating stars well is never a bad thing for business), and can continue on their own contention trajectory. From a process standpoint, it makes a lot of sense for everyone involved.