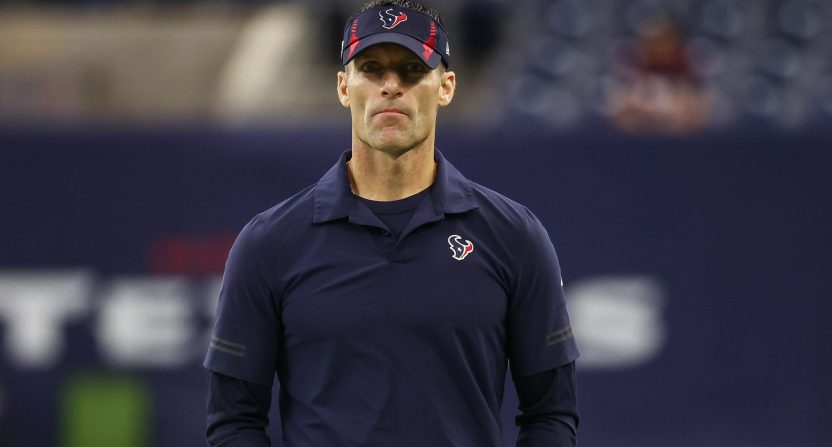 Totally get it. NFL head-coaching gigs are tough to come by. There are only 32 teams, and right now, nine have vacancies. By definition, it’s an exclusive club, and being there means you’ve reached the pinnacle of the football profession. But even the most desperate of candidates should avoid the Houston Texans, a wheelless jalopy on cinder blocks.

Houston is the worst available job out there. Worse than the Jacksonville Jaguars. Worse than the New York Giants. Worse than working at Family Dollar. Don’t take our word for it. Two of the franchise’s greatest players DeAndre Hopkins and J.J. Watt wanted out. Deshaun Watson is ready to bolt. And former defensive lineman Charles Omenihu, now with the San Francisco 49ers, described the Texans as a “circus show.”

Easterby has amazingly gone from being an intern, to chaplain, to character coach, to the front office of an NFL team. It’s one of the strangest career tragedies in league history. But because he previously worked with the New England Patriots, Texans owner Cal McNair thought that was good enough. Easterby was hired in 2019 despite a lack of experience. Well, as Easterby has gained more power, the Texans have become more of a joke.

While searching for a general manager, McNair reportedly ignored the recommendation of a search firm and hired Patriots director of player personnel Nick Caserio in January 2021. You have to wonder if Easterby’s influence played a role. Later that same month, the Texans shockingly hired former Baltimore Ravens assistant David Culley. At 65, he became the oldest ever first-time head coach.

Why Culley? Likely because no one wanted the job. Still, once Houston committed to Culley, you would figure they would give him time and not treat him like an interim solution. The Texans finished 4-13, including a victory over the Tennessee Titans. That was probably the best record the team could reasonably hope for with such a thin roster. Especially with the Texans deciding not to play Watson for an entire season due to multiple sexual assault allegations.

The upsets just keep on coming… 🐶

The Texans took down the Titans in Tennessee today, 22-13!

But the Texans further embarrassed themselves by firing Culley after one season. Houston justified the move by citing “philosophical differences.” It’s an explanation that is hard to believe. This was an expensive decision too. Culley will get $22 million for one year’s work. Call it hazard pay.

After all the dysfunction, why would anyone want to work there? Just look at how they treated the last guy. McNair hired Easterby and Caserio because he wanted to emulate the “Patriot Way.” But the Texans are the polar opposite. There’s no sense of stability, direction, or a plan. Also, the horrific details of the Watson situation hang over this franchise. Until there’s a new development on the legal front, Watson remains untradeable.

But in the NFL, you can always find someone to be a head coach. The Texans’ top choice might be former Miami Dolphins coach Brian Flores. He’s the betting favorite. That’s interesting for several reasons. Flores knows Easterby and Caserio from their time together with the Patriots. Flores, well respected in league circles, would also add some credibility to a franchise in dire need of positive press. Flores, however, has other suitors: the Chicago Bears and New York Giants. Both of those jobs would be better.

When Flores was with the Dolphins, they were believed to be the preferred destination of Watson because of Flores. But even if the Texans land Flores, that would not be enough to salvage the Houston-Watson relationship. Caserio has already said that Watson, who still faces 22 civil counts of sexual misconduct and sexual assault, probably will not return for the 2022 season.

The most bizarre candidate is Josh McCown. Hiring him would only reinforce every negative thing you’ve ever heard of the team. McCown, 42, has no coaching experience at the college or NFL level. He’s best known for being a journeyman quarterback over two decades.

True, in other pro leagues like the NBA and MLB, it’s not unheard of to hire former players with no experience. For example: Milwaukee Brewers manager Craig Counsell and Brooklyn Nets head coach Steve Nash. Both of those jobs are more about managing personalities. In the NFL, being the head coach is more demanding with larger rosters and intricate game-planning.

That’s why most head coaches are former coordinators, be it offensive, defensive, or special teams. McCown brings none of that. If Houston hires him, it would be on-the-job training. Unprecedented for an NFL head coach.

This is the second time McCown has interviewed for the job; he also did so last year. Clearly, they’re enamored with him. Mike Florio of Pro Football Talk reported that the Texans hope someone else will interview McCown to legitimize his candidacy. And apparently, the Jaguars have at least spoken to McCown.

Hilarious. Good luck with that.

Someone will be on the sidelines for the 2022 Houston Texans. But if you’re a coach with a semblance of dignity, it might be worth it to see if Family Dollar is hiring.