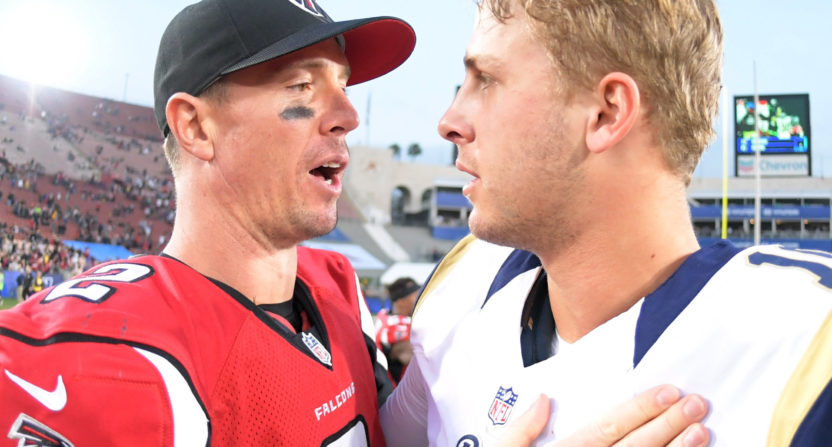 Where: The Los Angeles Memorial Coliseum, which last hosted a Rams playoff game in 1978.

Last time they met: Atlanta hammered the Rams on the road in December of 2016, but that was when the Falcons offense was unstoppable, before Jared Goff and Todd Gurley were good and before Jeff Fisher was relieved of his duties with the team.

1. Demons vs. virgins, or something like that: The Falcons are fighting the demons associated with blowing a 28-3 lead in last year’s Super Bowl, which appeared to cause a hangover that plagued the team throughout a shaky 2017 campaign. The Rams are fighting the valid notion that they’re not ready for playoff football, considering that their head coach is practically a teenager and they’re relying on a 23-year-old quarterback who is just a year removed from a comically abysmal rookie season.

Los Angeles is the youngest team in the entire NFC, so nobody knows what to expect from them. They’re favored, but that might have to do with the fact they’re at home and facing a team that often seems suicidal.

2. The Rams are much more dangerous than the Falcons on offense: And that’s really hard to believe when you consider that in 2016, Atlanta had the league’s highest-scoring offense and Los Angeles had the league’s lowest-scoring offense. In one year, the Rams went from worst to first while Atlanta dropped from first to the middle of the pack. That shows just how much going from Kyle Shanahan to Steve Sarkisian in the offensive coordinator role hurt the Falcons, as well as how much Sean McVay and Matt LaFleur have helped the Rams.

3. It’s been an amazing two-year run for Matt LaFleur: The guy was Atlanta’s quarterbacks coach for a historically productive 2016 campaign which included an MVP award for Matt Ryan, and now he’s McVay’s offensive coordinator in L.A. He and McVay do a hell of a job making life as easy as possible on Goff while getting the ball to star running back Todd Gurley in space as often as possible. They’ll look to do that Saturday night against a solid-but-toothless Atlanta D.

4. The Rams are also better than the Falcons on defense: Again, sort of hard to believe considering how much Atlanta’s young, fast D came on during the second half of the 2016 season. That defense was supposed to flourish in 2017, and while it hasn’t been a weakness, it’s gotta be disappointing that only four teams had fewer takeaways than Atlanta (16) during the regular season.

Meanwhile, the Rams defense — which entered the season known as a one-Aaron Donald-trick pony, had more takeaways (28) than all but four other units league-wide. Donald might be the most dominant defensive player in football, but a secondary led by rookie stud John Johnson III, breakout fourth-year safety Lamarcus Joyner, veteran corner Trumaine Johnson and underrated slot cover man Nickell Robey-Coleman has done an excellent job.

They’re deep up front, too, with Mark Barron, Alec Ogletree, Robert Quinn, Michael Brockers and Connor Barwin doing a fantastic job supporting Donald. Defensive coordinator Wade Phillips has a magic touch, but he’s got a hell of a group to work with.

5. For the Falcons to win… they’ll have to get running backs Devonta Freeman and Tevin Coleman going big-time against a defense that surrendered an ugly 4.7 yards per carry during the regular season. Ryan and Julio Jones can’t carry this team against Donald and Co. on the road, and they’ll need that backfield duo to recapture the magic that helped Atlanta make a Super Bowl run a year ago.

Under-the-radar potential X factor: Ordinarily this would be a chance to praise the Rams’ great special teams unit. Problem is the NFC’s best kicker, Greg Zuerlein, is on injured reserve. His replacement, some guy named Sam Ficken, has looked shaky. His performance Saturday could determine whether Los Angeles is up for this thing or not.

Prediction: The Falcons really faded on offense down the stretch, averaging just 17.6 points per game in five December affairs. They seem destined to be a one-and-done team in these playoffs. The mental factor is huge in this game, with both teams trying to overcome tremendous intangible obstacles.

That’s why I wouldn’t bet a dollar on either squad, especially with the Rams having limited home-field advantage. But it’s also why I wouldn’t dare bet against the stronger all-around team at home, especially considering the lack of momentum in Atlanta. Rams 30, Falcons 23