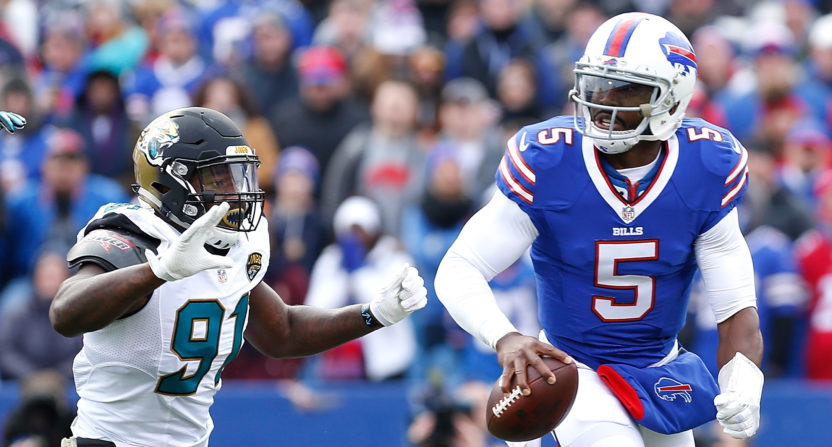 Where: EverBank Field in Jacksonville, which hasn’t hosted a playoff game involving the Jaguars this century (the Patriots beat the Eagles there in Super Bowl XXXIX).

Last time they met: The then-mediocre Bills beat the then-mediocre Jaguars 28-21 at home in November of 2016. Rex Ryan and Gus Bradley were their respective head coaches. A lot has changed.

1. Something has to give: The Jaguars haven’t won a playoff game since 2007. The Bills haven’t done so since 1995. Neither team has been to the playoffs in the last decade. Neither quarterback has started a playoff game, and quarterbacks making their first career playoff start are 1-10 since 2013. The winner will become an immediate Cinderella, the loser will be where everyone expected them to be at this point when the year started: the golf course.

2. The “nothing to lose” factor: But do the Bills have less to lose than the Jaguars? Even though Buffalo is breaking out of a longer drought, that may be the case. After all, few expected the Bills to make the playoffs this season after the team was widely accused of tanking in the offseason. They needed multiple breaks to sneak in, and those came not long after they benched their starting quarterback for an unprepared rookie fifth-round pick (a move that was reversed after immediately backfiring). The Bills have already won their Super Bowl this year. The rest is gravy.

Meanwhile, the Jags actually have the talent to make a Super Bowl run, and have spent a lot of draft capital and straight-up cash in order to accumulate said talent. At home, they’ll be feeling a lot more pressure than Buffalo on Sunday afternoon.

3. Front-to-back, the Jaguars have the best defense in football: You can’t find a weak spot, which is why they ranked first in the AFC in terms of points, yards and yards per play allowed and second in terms of sacks and turnovers. Calais Campbell, Malik Jackson, Yannick Ngakoue, Telvin smith, Myles Jack, Paul Posluszny, Jalen Ramsey, A.J. Bouye, Tashaun Gipson, Barry Church. Excellent, all of ’em. The Jags surrendered fewer than 16 points in three of the five games they played in December.

4. But the quarterback advantage goes to Buffalo: Tyrod Taylor has his limitations, which was part of the reason that benching happened in November. But Taylor is a substantially better quarterback than Jacksonville’s Blake Bortles, who didn’t exactly shake the bust label with another poorly-rated campaign. Taylor trumped Bortles in almost every major passing category, while also putting up bigger numbers as a rusher. And while Taylor finished with a strong Week 17 performance against Miami, Bortles posted an abysmal 58.6 passer rating in back-to-back losses to close out the regular season.

The Bills have the more reliable, less mistake-prone quarterback. And in 2018, that can compensate for a lot of other matchup deficiencies.

5. If the Bills are going to pull off the upset… LeSean McCoy has to play, and play well. The veteran workhorse back was carted off last week due to an ankle injury, and reports indicate he’ll be a game-time call Sunday. Without McCoy, who ranked fourth in football with 1,138 rushing yards, it’ll be tough for Buffalo’s offense to set the tone and control the game on the road against an extremely tough defense. And that’ll be necessary if they want to force the Jaguars offense to lose balance and expose Bortles.

Under-the-radar potential X factor: Campbell, Jackson, Bouye and Ramsey get all of the credit, but Ngakoue was actually the only player in football this season to record at least 12 sacks and five forced fumbles. Could see him making a big play to turn the tide.

Prediction: The Bills aren’t close to as good as Jacksonville, but momentum, a lack of pressure and a better quarterback should give them a shot against a team that lacks playoff experience as much a they do, especially if McCoy plays (and I believe he’ll find a way to do so). I get the feeling this thing goes to overtime, but because they’re the Bills they’ll fall short in tragic fashion. Jaguars 23, Bills 20