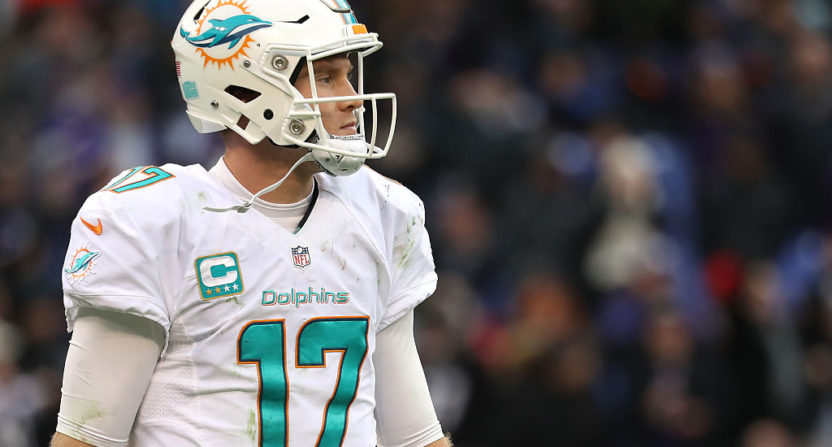 When the Miami Dolphins selected Ryan Tannehill with the eighth pick in the 2012 NFL Draft, some of the team’s fans felt like he could possibly develop into the franchise’s best quarterback since Dan Marino retired after the 1999 season.

During the nine years before the Dolphins drafted Tannehill, eight different quarterbacks finished a season as the team’s passing leader. This amount of instability under center certainly played a part in Miami appearing in only one playoff game over those nine years.

But for the past five seasons, only Tannehill’s name has been atop the Dolphins’ year-end passing leaders. Miami was even impressed enough with his performance during his first three seasons with the team that they awarded the quarterback with a contract extension worth up to $77 million in 2015.

Tannehill has already finished two of his years with the Dolphins with at least 4,000 passing yards, something no Miami quarterback besides Marino had done before him. But his career winning percentage is under .500 and he has a losing record against each of the other three teams in the Dolphins’ division.

Yes, many talk about how quarterbacks should not be blamed for a team’s wins or losses. But there is a reason why a majority of the NFL’s top signal-callers find themselves playing in the postseason year after year.

In his first year under new Dolphins head coach Adam Gase in 2016, Tannehill was a more efficient quarterback (career-high 67.1 completion percentage), but he saw a decrease in his passing yardage and touchdown totals as Gase emphasized on running a more balanced scheme for Miami’s offense that resulted in fewer pass attempts per game for Tannehill than he had become accustomed to.

He actually struggled a bit during team’s first seven games of the season, ending three of those matchups without a single touchdown pass and averaging at least one interception per game. But Gase obviously made some adjustments during the Dolphins’ bye week as Tannehill tossed 12 touchdowns and just five interceptions in the six games he started following the team’s midseason break.

The Dolphins’ quarterback also missed time due to injury for the first time in his career last season. Tannehill suffered a knee injury in the team’s Week 14 matchup with the Arizona Cardinals and was unable to play in Miami’s final three regular season games and their playoff showdown with the Pittsburgh Steelers.

Now coming into his sixth year with the Dolphins, and second with Gase as his head coach, the 2017 season will be very important for Tannehill in regards to his future with the team.

But some may ask why that could even be the case? Well, it has a lot to do with money.

Including 2017, Tannehill carries a cap hit of at least $19 million for the next four years. That seems like a lot of money to pay to a quarterback whose head coach obviously does not feel comfortable enough to center the offense around at this point.

Gase may not even want Tannehill as his quarterback beyond 2017. Miami drafted Tannehill four years before Gase was brought in and the head coach may want to handpick a signal-caller that he feels is a better fit for his offensive scheme.

Luckily for the Dolphins, they can conveniently part ways with Tannehill after this season and save over $15 million in cap room while only having to pay the quarterback $4.6 million.

Obviously, Miami would like Tannehill to succeed under center and play like he did during his final six games of 2016. But if he struggles this year and performs more like he did in his first seven games of last season, the quarterback could be looking for a new team come the 2018 offseason.