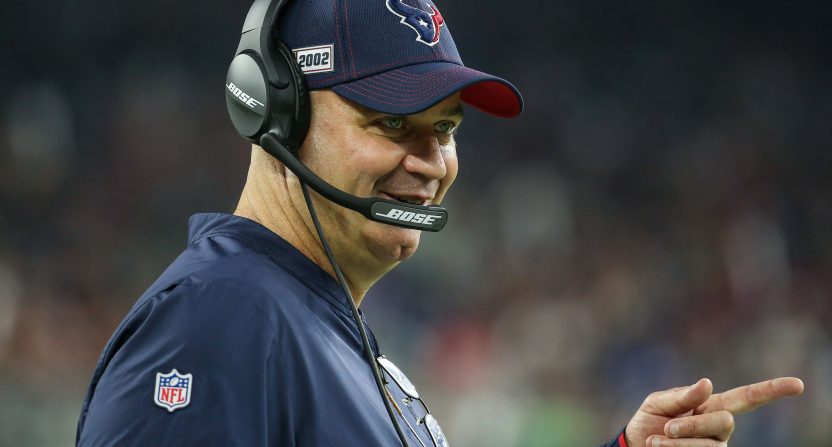 There are reasons why NFL teams usually hire one person as a head coach, and another person as a general manager. Only two guys do both jobs: New England’s Bill Belichick and Houston’s Bill O’Brien. Consider Belichick an outlier, a person so usually adroit that he can successfully handle the vast complexities of both positions.

A good GM does what’s best for the future of the franchise (long term). O’Brien has no incentive to think about tomorrow because he’s trying to win now (short term). That’s a conflict. When the coach acting as GM starts prioritizing the short-term over the long-term, bad things can happen.

O’Brien the GM gave away star pass-rusher Jadeveon Clowney to Seattle for nothing. Officially, the Texans got back a third-round pick and linebackers Barkevious Mingo and Jacob Martin. But they might as well have gotten back a box of stale doughnuts and a pencil sharpener.

If that wasn’t risky enough, O’Brien the GM acquired Miami left tackle Laremy Tunsil and wide receiver Kenny Stills in a deal that will also send the Texans’ first-round picks in 2020 and 2021 to the Dolphins.

In isolation, Tunsil and Stills should help the Texans this season. However, a general manager not named Bill O’Brien probably wouldn’t have surrendered TWO (?!?) first-round picks. First-round draft choices are the building blocks of your franchise’s future. But Bill O’Brien doesn’t seem to be concerned with the future. He has a 42-38 record with one playoff victory over five seasons. He’s trying to stay employed.

O’Brien could be proven right. Maybe Houston is a left tackle and No. 2 wide receiver away from a championship. IF the Texans make a miraculous run to the Super Bowl, then that gives him justification for prioritizing a short-term goal.

How did a coach with a lackluster record amass this kind of power? First, former general manager Brian Gaine was curiously fired in June after less than two years on the job. The Texans tried to hire New England Patriots’ director of player personnel Nick Caserio, but were rebuffed after accusations of tampering.

So, who takes over as GM? O’Brien in a massive power grab that he certainly hasn’t earned and is probably ill-equipped to handle. He made moves that clearly benefit him and not necessarily Houston. It’s a roll of the dice that many wouldn’t do.

Can you imagine Belichick completely botching the Clowney situation? Or him sending away first-round picks for two guys who have never even made a Pro Bowl? Of course not. The Patriot Way is getting value and never overspending for anybody. Belichick got Randy Moss for a fourth-round pick from the Raiders. He signed Rodney Harrison after he was cut by the Chargers. He didn’t lavish left tackle Nate Solder with a fat contract, and instead let Solder walk as a free agent. In a salary cap sport, these were critical moves. That’s why New England is always in the Super Bowl hunt.

The O’Brien Way is not getting value for Clowney, and overspending on Tunsil and Stills.

You wonder if Andrew Luck’s retirement factored into O’Brien’s desperation. The Colts basically squandered a generational talent by not giving him enough support. With Luck gone, Deshaun Watson is the best quarterback in the AFC South. Last season, he was sacked an NFL-high 62 times. That’s the kind of punishment that drove Luck to quit.

The addition of Tunsil should improve the offensive line. He’s an above average left tackle, and he’s signed for 2019 and 2020 at an affordable price. If he can help keep Watson upright, that could make the Texans demonstrably better. The additional of Stills gives the Houston a No. 2 receiver to pair with All-Pro wideout DeAndre Hopkins. Stills (37 catches for 553 yards and six TDs) is a vertical threat who could benefit from Hopkins drawing double coverage.

In a perfect O’Brien world, these moves would help Houston win the division and at least one playoff game. He gets to look like a genius and gets a contract extension (He’s signed through 2022). Maybe he’ll even stay on as GM.

But if the Texans regress, he would’ve mortgaged their future for little in return. O’Brien the coach might let down O’Brien the GM. He’s made a number of questionable decisions, most recently in last year’s loss to the Patriots. Game management hasn’t been a strength, and that’s crucial when so many games are decided by one score.

Desperation could cost O’Brien his job. And it could cost the Texans a lot more.