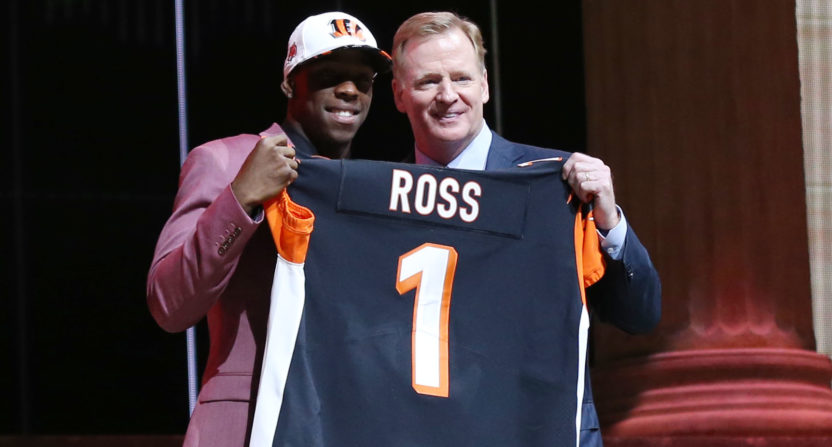 At last year’s NFL Draft, three wide receivers were selected in the top 10.

The first was No. 5 overall selection Corey Davis, who caught just 52.3 percent of the passes thrown his way and failed to score a touchdown in 11 games as a rookie with the Tennessee Titans.

The second was No. 7 overall selection Mike Williams, who caught just 47.8 percent of the passes thrown his way and failed to score a touchdown in 10 games as a rookie with the Los Angeles Chargers.

The third was No. 9 overall selection John Ross, who caught zero passes on only two targets while of course failing to score in just three games as a rookie with the Cincinnati Bengals.

All three can lay part of the blame on injuries (a hamstring for Davis, a back for Williams and knee and shoulder problems for Ross), but they weren’t reliable when they were on the field and all three of those teams are now likely wondering if they made a mistake.

While all three players have plenty of time to turn it around, it’s easy to wonder if the lack of productivity from Davis, Williams and Ross could scare teams away from drafting receivers early on during next week’s draft.

The latest consensus mock draft from Walter Football has Alabama’s Calvin Ridley going No. 16 overall to the Baltimore Ravens or 19th overall to the Dallas Cowboys, SMU’s Courtland Sutton going 24th to the Carolina Panthers or 29th to the Jacksonville Jaguars and no other wideouts being picked in Round 1.

The only other receivers who have even been mentioned as potential late-first-round picks are D.J. Moore from Maryland and Christian Kirk from Texas A&M.

Now, this might be a deeper draft class overall than last year’s, and an argument can be made that Davis, Williams and Ross were better prospects than Ridley, Sutton, Moore and Kirk are. Davis put up insane numbers at a small school, Williams did the same at Clemson and Ross ran the fastest 40-yard dash in the history of the NFL scouting combine.

But all had flaws (injury red flags, lack of big-game experience, one-dimensional skill sets), just like the top receivers in this class. Ridley has a less-than-ideal frame and is prone to drops, but he’s also a potential game-changer and should be polished coming out of the SEC. Sutton isn’t explosive, but he put up huge numbers at SMU and could be a Pro Bowl-level possession receiver. Moore might not have the chops to get out of the slot, but he still has a tantalizing combination of size and speed. Kirk lacks top-end speed and size, but was even more productive than Ridley in the most competitive conference in college football.

So it’s still odd that only one or two might go off the board on the opening night of the draft.

But Davis, Williams and Ross didn’t deliver last year. And it’s not as though the rookie receiver classes which preceded that one are settling potential fears associated with drafting a player at that position in Round 1.

Among the four receivers drafted in the first round in 2016 (Corey Coleman, Will Fuller, Josh Doctson and Laquon Treadwell), only Fuller has come close to living up to expectations. In fact, the only first-round receiver drafted in the last three years with a Pro Bowl on his résumé is Amari Cooper, who is coming off a disappointing season himself in Oakland. Cooper was drafted ahead of five other first-round wideouts (Kevin White, DeVante Parker, Nelson Agholor, Breshad Perriman and Phillip Dorsett), none of whom have really taken off.

That receiver-heavy first round in 2015 might have been a response to an epic 2014 first round that included Odell Beckham Jr., Mike Evans, Brandin Cooks, Sammy Watkins and Kelvin Benjamin. But this receiver-light first-round might be a response to the duds that have followed since then.