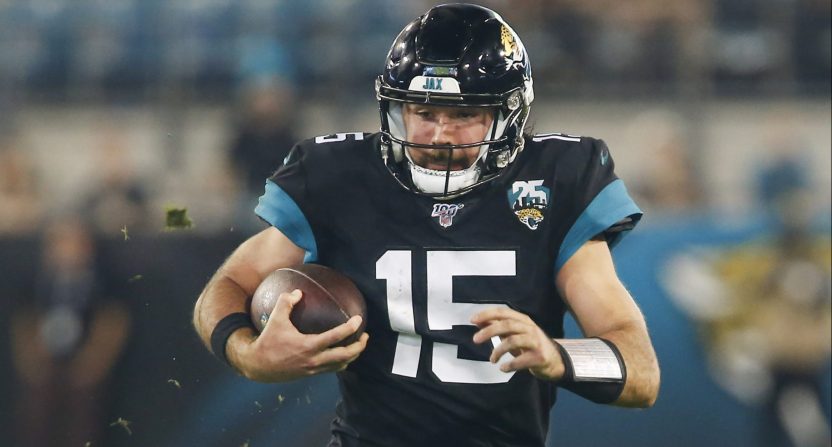 Round 1 is done. And while tides can turn in the next six rounds of the NFL draft, first-round wins and losses carry a lot of weight. Based on the first 32 selections, here are our winners and losers from Thursday night.

Winner: Miami Dolphins — If in September you told the Dolphins they would inspire confidence with a 5-4 finish to the season and still land potential star Tua Tagovailoa at the top of the draft without trading up, they’d be tickled pink.

Winner: Gardner Minshew II — The top four quarterbacks are off the board and none of them will be competing with the sophomore sixth-round pick in Jacksonville.

Loser: Cam Newton — After removing the Dolphins and Chargers from Newton’s market, who’s left? The 2015 MVP might have to wait for an injury somewhere.

Winner: San Francisco 49ers — They grabbed one of the draft’s top receivers and landed a younger, cheaper version of DeForest Buckner. Not bad for a team coming off a Super Bowl season.

Loser: Las Vegas Raiders — Henry Ruggs III has a higher bust potential than Jerry Jeudy and CeeDee Lamb, both of whom were available. And then they completely reached for Damon Arnette.

Winner: Arizona Cardinals — They got fantastic value for Isaiah Simmons, who is the second-best defensive player in this class. He’ll help Chandler Jones immensely.

Loser: Green Bay Packers — Here are 1,000 words on why trading up for Jordan Love was a sick joke.

Winner: Tua Tagovailoa — Many originally figured that Tua’s dislocated hip would at least knock him out of the first round, if not derail his entire career. Ultimately, it might have only cost him a couple of draft slots. He also lands in a great spot where the rebuild is on the right track.

Loser: Aaron Rodgers — The Packers lost, but it was Rodgers in particular who came out a loser. Not only is his job threatened, and not only become a distraction within the team, he’ll again be left with a far-from-stocked cupboard of talent surrounding him.

Winner: Jeff Okudah — The polished corner is the first defensive back to be drafted with a top-three selection since the Seattle Seahawks took another Ohio State DB, Shawn Springs, third overall in 1997.

Loser: Kyler Murray — While the Simmons pick was a win, it meant no blue-chip offensive tackle to protect one of the most roughed-up quarterbacks from last season.

Winner: Daniel Jones — On the other end, Jones will now have the polished and formidable Andrew Thomas protecting him in his sophomore campaign.

Loser: Michael Gallup — Earlier this offseason, it appeared the 2018 third-round pick might have a chance to become the No. 1 target in Dallas. But now the Cowboys have re-signed Amari Cooper and used a first-round pick on CeeDee Lamb. And on top of that, Michael Irvin called him “the young guy Williams” on national television.

Winner: Tampa Bay Buccaneers — Tremendous value for Tristan Wirfs, who helps Tom Brady right away and could become a superstar.

Loser: New Orleans Saints — I understand drafting the best available player, but why would the Saints take Cesar Ruiz when they already have Larry Warford, Erik McCoy, Andrus Peat, and Nick Easton? They should’ve gone with a receiver or Patrick Queen.

Winner: Football fans who watch the draft — This was downright refreshing. Fewer cliché-drenched interviews with players being asked what’s going through their mind, and more stats, tape, and analysis. Plus, it was fun critiquing makeshift war rooms.