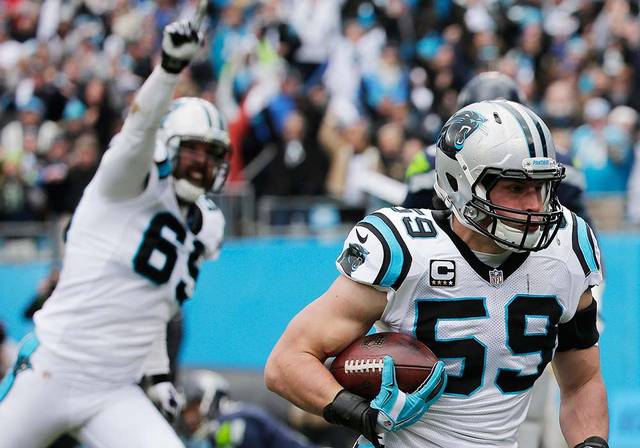 Sunday’s NFC Divisional Playoff Game between the Carolina Panthers and the Seattle Seahawks was so delicious because it gave sports fans that always-fascinating choice: evidence or reputation?

From time to time, we get to see a sporting event which puts that simple question to the test.

Do you trust what your eyes have seen within the course of a season, or do you count on a team’s ability to call forth muscle memory and an inexhaustible supply of belief built on past escapes and previous achievements?

Sometimes, the team with the reputation summons the ol’ devil magic one more time, improbably fending off the team which has been the best during the long march of the regular season. The 2011-2012 New York Giants did this en route to their Super Bowl XLVI title and a repeat win over the New England Patriots. Speaking of the Patriots, their win over the top-seeded San Diego Chargers in the 2006 AFC Divisional Playoff round (January of 2007) also represented a triumph of reputation over a full season of evidence.

Sunday in Charlotte, however, evidence defeated reputation. As a result, the Carolina Panthers will host the Arizona Cardinals in an NFC Championship Game filled with new money and fresh faces.

The Panthers, 15-1 yet hearing all week about how Seattle was so dangerous, punched the Seahawks in the mouth at the start of the game and met no real resistance until after halftime. Up 24-0 just 18 minutes into the contest, the Panthers didn’t have to be great in the second half. They needed to control the ball enough to prevent Russell Wilson from working his improbable playoff voodoo. They did, and unlike the Green Bay Packers a year before, they recovered an endgame onside kick to put the Seahawks away.

Forceful, but also precise in execution; energetic, yet also clever with play selection; passionate, yet also attentive to virtually every detail, the Panthers played a virtually perfect first half. They couldn’t have done anything much better.

The Seahawks couldn’t have done anything worse.

Seattle made a gallant charge in the second half, as you’d expect from a two-time defending NFC champion, but for all the nervous stomachs the Seahawks might have created in the hearts of Carolina fans, they never got a possession with a chance to tie or take the lead. They never had a chance to get a defensive stop with a reasonable allotment of timeouts AND a chance to give Wilson the ball with the game on the line. The Seahawks competed honorably, but the drawn-out nature of the second half should not obscure the larger reality on Sunday:

The Panthers were better. A lot better.

Yes, even with the 31-24 final score, Carolina did nothing out of desperation and everything from a position of strength. If second-guessers have to bring up decisions to kick a field goal when down 31-0, those decisions were never very significant to begin with. (Timeout management, going for 2-point conversions when down 24, and punting down 17? Those are different stories.) 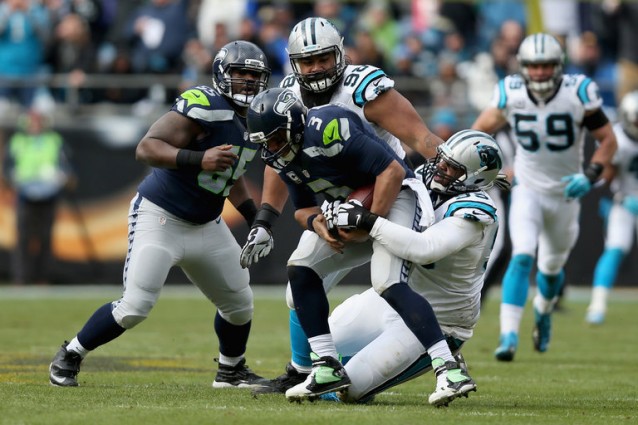 The Panthers simply roughed up the Seahawks in the first 30 minutes.

Whether it was a 59-yard rumble by running back Jonathan Stewart on the first play from scrimmage, or a bull-rush which led Russell Wilson to throw two interceptions which led to 10 non-offensive Carolina points, the Panthers got in the Seahawks’ grill and stayed there. Even when Wilson tried to lead a comeback, Carolina came up with drive-blunting sacks which forced a few punts and slowed down the Seahawks in their attempts to score quickly. Carolina didn’t manage the second half perfectly, but it managed it well enough to win without too much last-minute drama.

This victory, primarily attained by Carolina’s toughness up front, wasn’t just about landing the first few punches for the NFC’s top seed. The Panthers won with brains, too. They smartly moved their chess pieces — more precisely, they used all of their pass catchers, with offensive coordinator Mike Shula deftly attacking Seattle’s defense from various angles. He didn’t give the Seahawks the same look in the first half, keeping the visitors off balance.

Carolina incorporated tight ends, receivers and running backs into its overall attack. Likely league MVP Cam Newton was razor-sharp from the jump, and as a result, Carolina’s offense motored to touchdown drives of at least 75 yards on each of its first two possessions. Combined with a pick-six by Luke Kuechly against a flustered Wilson, the Panthers were up 21-0 just seconds into the second quarter.

The fourth quarter was interesting instead of being a total snoozer, but just about everyone watching — in the stands or on TV — knew with about five minutes left that the Seahawks would need another onside-kick miracle to send this game into overtime or win it.

Needless to say, teams can’t depend on opponents bobbling onside kicks every season. The Seahawks were a few cuts below the best teams in the NFL this season. Carolina markedly exceeded them on Sunday.

Seattle is a proud team, but all through the 2015 season, the Seahawks were rattled when tidal waves of momentum crashed against them. Usually, these adverse sequences swept over them in fourth quarters — they lost four fourth-quarter leads during the regular season — but in the playoffs, Seattle has historically had trouble playing well in first quarters. This was apparent a week ago in Minneapolis. It was apparent in each of the team’s two NFC Championship Game victories from the previous two seasons. It was even in evidence in January of 2013, when a younger team learning how to win fell behind Washington, 14-0, in the wild card round, and then fell behind Atlanta, 27-7, entering the fourth quarter.

In so many ways, the Seahawks — a team picked by many to win this game on the basis of reputation — were done in by their reputation for being inconsistent and, more specifically, a slow-starting team in the playoffs.

Carolina — an ascendant team the way the Seahawks were two seasons ago at this time — did not play with any such baggage. It showed.

Seattle is learning how hard it is to stay atop the mountain in the NFL. The Carolina Panthers will learn next week if they’re going to be playing in Super Bowl 50, in pursuit of their first NFL championship as a franchise.