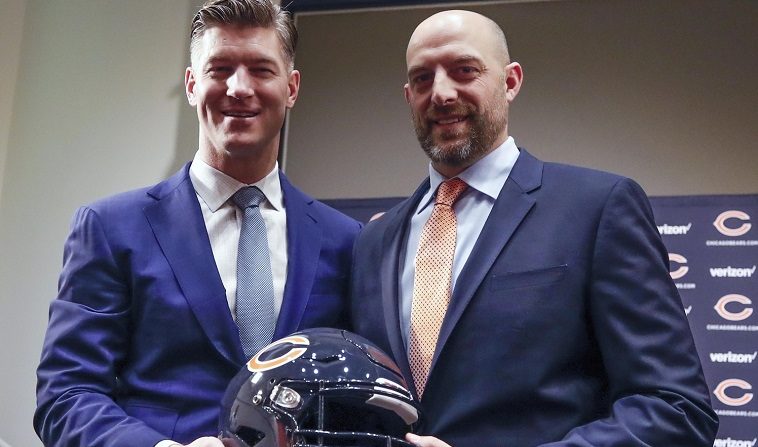 At 4 p.m. ET Wednesday, NFL teams can legally sign free agents. But the league’s legal tampering period has been raging since Monday at noon ET.

Kirk Cousins signed with the Minnesota Vikings. Case Keenum will quarterback the Denver Broncos. Drew Brees is staying with the New Orleans Saints. Richard Sherman is eyeing vengeance on the Seahawks by signing with the San Francisco 49ers. And receiver Allen Robinson is one of Mitchell Trubisky’s new weapons with the Chicago Bears.

Already, we have plenty of early offseason winners and losers in the books. A lot could change between now and the end of the first wave of free agency, and even more will change in the ensuing waves and the draft, but these are the teams that are off to notably good or bad starts.

The salary cap-rich Bears are smartly doing everything they can to better support young quarterback Mitchell Trubisky. On Tuesday, they added three key pass-catchers in Allen Robinson, Trey Burton and Taylor Gabriel, all of whom have high potential when teamed up with promising young wideout Cameron Meredith (returning from a lost season due to a knee injury). Chicago also brought back starting cornerback Prince Amukamara and will still have about $50 in cap space when the new league year gets underway.

Weston Richburg got away, they failed to land top target Andrew Norwell and for some reason they gave $7 million over two years to Jonathan Stewart. Yes, Jonathan Stewart is still in the league.

One of the most jacked rosters in all of football now has one of the best young guards in the game. Yes, they paid a premium for Andrew Norwell, but his presence will make that offense much better. They also brought back Marqise Lee and added Donte Moncrief and still have plenty of room under the cap.

Why does everyone keeping paying huge bucks to Trumaine Johnson? He’s not that good. And yeah, I know the Jets have a trillion dollars to spend, but $15 million a year is a joke. Throw in that 39-year-old Josh McCown is still their No. 1 quarterback and it wasn’t a good Tuesday for Gang Green.

New England South now has three top-notch corners (two of which are former Patriots) in Adoree Jackson, Logan Ryan and Malcolm Butler. The Titans also brought in Dion Lewis to work with Derrick Henry and still have over $50 million in cap space.

I think they passed out. Somebody wake them up and tell them they have a billion holes to fill and over $73 million to spend.

They get a shoutout here more for the work they did leading up to Monday and Tuesday. That defense is going to rock with Marcus Peters and Aqib Talib joining Aaron Donald and Lamarcus Joyner.

Cousins is gone, as are starting-caliber corners Bashaud Breeland and Kendall Fuller (who was dealt away in the Alex Smith trade). Plus, they gave silly money to the relatively unproven Paul Richardson.

They new-feel Packers are finally participating. Graham will make Aaron Rodgers’ life a lot easier in the red zone, while Muhammad Wilkerson will face less pressure on a cheap one-year contract. It was about time they became more proactive in free agency.