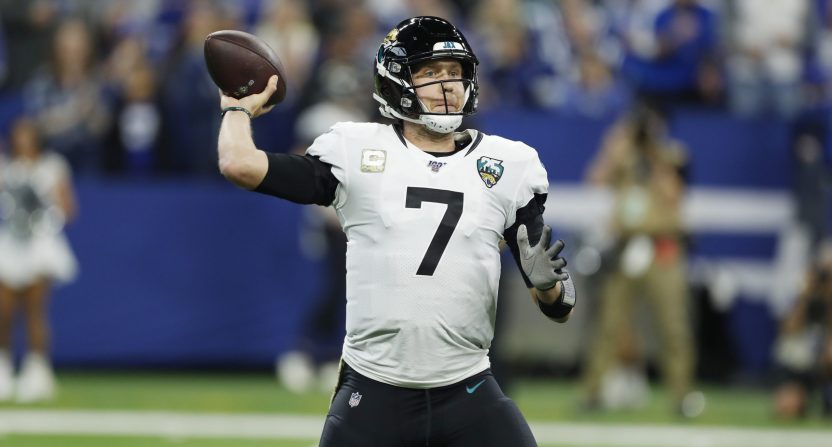 With just four weeks remaining in the 2019 NFL regular season, we’re already able to declare some offseason moves to be hits and others to be utter busts.

With 13 weeks’ worth of hindsight, here are the best and worst additions from the 2019 offseason.

The Smiths were expensive, but they already have a combined 20.5 sacks and 88 tackles in 12 games. Both might make the Pro Bowl, and they’re a huge reason why the Packers defense has gone from liability in 2018 to asset in 2019.

Dude suffered an injury in his first game, eventually returned, and then was benched in favor of a rookie sixth-round draft pick. Foles has been absolutely awful outside of Philadelphia in his career, and it already looks like the Jaguars wasted $88 million on him.

The veteran six-time Pro Bowl safety hasn’t returned to superstar status, but he’s remained healthy and has emerged as a key leader within a resurgent defense that desperately needed a presence like his. Meanwhile, Ingram has looked rejuvenated with a 5.0 yards-per-attempt average at the age of 29.

Flowers makes $18 million a year, but he has just six sacks and the Detroit defense hasn’t gotten any better. What’s the point in spending that kind of money if you don’t improve? And while it’s too early to write off Hockenson, his rookie season was a mess. You can’t draft a tight end that early when you’ve got that many holes. They could’ve had Devin Bush!

The 29-year-old former Arizona Cardinal and Raven is well on his way to a 1,000-yard season. He’s a dynamic player who stretches the field for Josh Allen and has really found a groove as the season has progressed.

Could’ve told you this at the time. You don’t give $13.1 million to a cranky, tired running back, and you don’t give $17 million to an off-ball linebacker. Those two make a combined $30.1 million a year, and they’ve done nothing to help the Jets on the field. Bell has the second-lowest qualified yards-per-attempt average in the NFL, while Mosley has played in just two games.

Still not sure he’s the long-term answer under center, but Marcus Mariota sure isn’t and Tannehill has given the Titans life. He’s the league’s highest-rated passer thanks in part to an NFL-best 9.1 yards-per-attempt average.

With 3.5 sacks in 11 games, Ferrell looks more and more like a reach. Meanwhile, fellow top-10 defensive linemen Josh Allen and Ed Oliver are making much larger impacts in Jacksonville and Buffalo, respectively.

The Offensive Rookie of the Year frontrunner ranks fourth in the NFL with 1,061 rushing yards. He’s a big reason the Raiders have been surprisingly competitive this year.

They then gave Clark a five-year, $104 million contract, making him one of the highest-paid defensive players in NFL history. Thus far he has five sacks in 10 games, and the Kansas City defense still sucks.

Among rookies, only DK Metcalf has more receiving yards than McLaurin, who might push 1,000 yards despite having a significantly worse quarterback situation than Metcalf (and pretty much everyone else). Not a lot has gone right for the Redskins this year, but the Ohio State product looks like a steal from Round 3.

The washed-up former champion lasted just eight games before the Broncos gave up and tried something new. His career is likely over, or at least it should be.