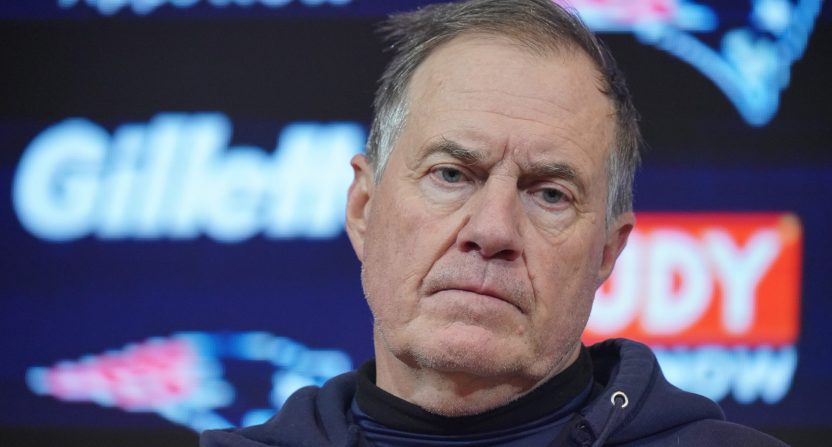 Sometimes destruction is a necessary evil for a new cycle to begin. Kingdoms collapse. Empires crumble. Dynasties end. No one stays on top forever. This NFL season will conclude with the New England Patriots being completely irrelevant.

It might not be officially over yet, but you can see the end from here. Maybe Bill Belichick can cobble together a few more schemes. Maybe Cam Newton can turn back the clock for a couple of more games. But that’s like installing a new screen door on a burning house.

Many will take these results and use them as a referendum, especially considering how well Tom Brady is playing for his new team, the Tampa Bay Buccaneers (6-3). Who was most responsible for the Patriots’ six Super Bowl championships – Belichick or Brady?

Understandable. Also, way too simplistic. A lot of people and a lot of things go into winning. You need the right blend of supporting talent, ownership, and considerable luck. If Belichick and Brady individually had the winning pixie dust, they would’ve been a lot more successful earlier in their careers. Belichick was fired as the Cleveland Browns coach. Brady never reached the national title game at Michigan and was a sixth-round draft pick.

The more interesting questions: Where does New England go from here? Will Belichick stick around for the challenging rebuild?

You couldn’t blame Belichick for plotting an exit strategy. He’ll turn 69 in April. He’s the second-oldest coach in the league, trailing only Pete Carroll, who’s several months his senior. But while Carroll has a quarterback in his prime in Russell Wilson to keep him young, Belichick is staring at the smoldering wreckage of what used to be the envy of the league.

We’ll never again see two decades of dominance like what Belichick enjoyed in New England. And after achieving that, what kind of appetite or patience will he have for retooling? He has no long-term solution at quarterback. His defense has been mediocre. And the Patriots might not be bad enough to get the kind of high draft pick that will make a difference. Plus, as much as Belichick is praised for his acumen, his talent evaluation has been poor lately.

For example, in 2019 they could’ve had wide receiver DK Metcalf (second-round pick, 64th overall). They took wide receiver N’Keal Harry (first-round pick, 32nd overall). Okay. A lot of teams passed on Metcalf. What’s worse? The Patriots haven’t drafted a Pro Bowl player since 2013 (linebacker Jamie Collins, second round). That’s staggering. It’s also an indication of how much work there needs to be done.

Winning the AFC East has become considerably harder. New England used to be able to pencil in five, six victories every year. The Dolphins, Bills, and Jets were woefully incompetent. But now, Buffalo probably will win the division. Miami might be the team of the future. The Jets are a dumpster fire, but they’re the favorite to secure the No. 1 overall pick and select Trevor Lawrence. With new leadership, maybe they’ll be better.

Speculation has run rampant that Belichick could retire. He has nothing more to prove. He’s the ultimate winner, even with all the scandals. Nobody has been better in the history of the sport. Belichick could hand the baton off to heir apparent Josh McDaniels.

There are also rumors that another franchise could attempt to hire Belichick. If not as a coach, perhaps as the president of football operations. Surely some team would like to throw a record-breaking salary at Belichick with perhaps an ownership stake. Belichick is under contract, so anyone who wants him would have to trade for him.

Coaching trades don’t happen often, but they do happen.

In 2006, the Kansas City Chiefs sent a fourth-round pick to the New York Jets for Herm Edwards. Edwards had a .487 winning percentage with the Jets and was even worse for the Chiefs (.313). In 2002, the Tampa Bay Buccaneers sent a king’s ransom of two first-round picks, two second-round picks, and $8 million to the Oakland for Jon Gruden. Tampa Bay won the Super Bowl in Gruden’s first season.

Heck, it wouldn’t even be the first time Belichick has been traded. The Patriots acquired Belichick from the New York Jets in 2000 for a package of picks including a first-rounder. How much would a team now give up for 2020 Belichick?

The starting point would be two first-round picks, at minimum. With the additional draft capital, New England could rebuild. What teams would be willing to part with picks for Belichick?

The Jets would be tempted. So would the rudderless Houston Texans, who don’t have a general manager or permanent coach- but do have quarterback Deshaun Watson. The Jacksonville Jaguars are intriguing. They have the youngest roster in the league, four picks in the first two rounds of next year’s draft, and the most salary cap space for 2021.

Or maybe, just maybe, Belichick will indeed call it quits. He’s been working in the NFL since 1975. He can lounge on his boat. Play with his dog.

It might be time for this king to abdicate his throne.