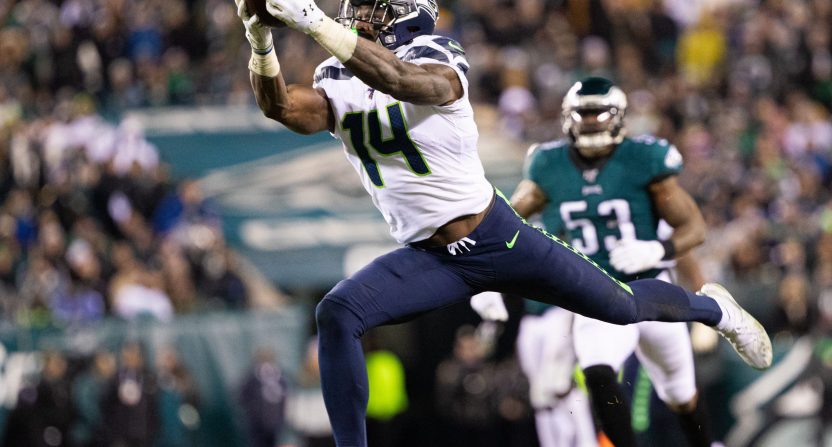 In a battle between the two best bird teams in the NFC, it’s the fifth seed Seattle Seahawks winning 17-9 over the beaten and battered Philadelphia Eagles. Carson Wentz’s head injury would prove pivotal for Philadelphia as the Eagles never really could get an advantage after that play as the Seahawks got eight sacks.

The Eagles stepped up early as they bent under the Seahawks offense but were unwilling to break. Holding them to a field goal attempt, Vinny Curry stepped up for the home team and blocked the kick to keep things scoreless.

The most critical moment of the game was definitely Carson Wentz getting hit by Jadeveon Clowney late in the first quarter. Wentz was heading to the ground and was hit from behind in a helmet-to-helmet hit as Wentz not only took a blow to the head from Clowney’s hit but hitting the turf as well. Wentz would be out for the rest of the game and that brought in 16-year journeyman quarterback Josh McCown as he played his first playoff game in his career despite playing on his 11th NFL team.

The hit that knocked Eagles' QB Carson Wentz out of the game… 😨 pic.twitter.com/k0hQm81m9p

Many are going to point at this as another example of Wentz being injury prone and not being there for the team in the big moment but that’s not fair to Wentz. It’s a head injury and if you’re taking two hard hits at such a force as Wentz took, most people are going to unfortunately suffer the same fate.

After both teams traded field goals, the Seahawks were cooking up a late half drive in the second quarter. With a little over a minute left, Marshawn Lynch broke through and scored the first touchdown of the game to take it to halftime with a seven point lead.

The Eagles started the second half with a field goal to make it a four point game but the Seahawks answered with a long D.K. Metcalf touchdown to create some breathing room with an 11 point lead.

D.K. Metcalf makes the catch, gets back up and crosses the goal line for the TD! @dkm14 @DangeRussWilson

You can’t say the Eagles never gave up but things weren’t clicking toward the end of the game. While down eight, Miles Sanders dropped an open fourth down pass in the middle of the fourth quarter. And then after the Eagles were given a lifeline with a very obvious Trey Flowers pass interference call in the red zone, McCown was stuffed on fourth down with less than two minutes left and that was that.

In the end, the Seahawks were the better team but the Eagles shouldn’t be disappointed with their effort. Coming from a division that wasn’t great, the Eagles suffered more injuries than the average team would have and still made the playoffs. And then with their starting quarterback taken out and their best pass catcher just coming back from injury, the Eagles were still there at the end.

As for the Seahawks, the team who was a few inches and a missed pass interference call away from getting a first round bye, they move forward and will be formidable in the next few weeks.

Now that the Wild Card Round is over, it’s onto the Divisional Round. On Saturday, it’s a pair of 6 vs. 1 matchups as the Vikings face the 49ers in the Saturday afternoon game while the Titans play the Ravens Saturday night. On Sunday afternoon, the Texans head to Kansas City to play the top seed Chiefs while the Seahawks play the Packers on Sunday night.