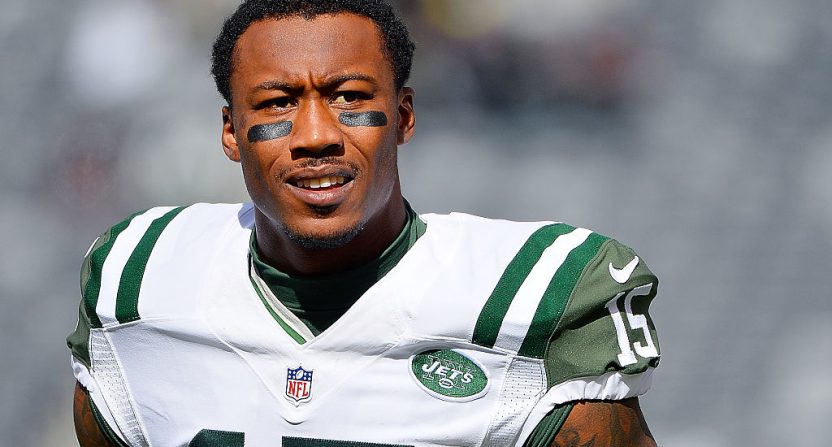 And now the Jets are releasing WR Brandon Marshall, per sources.

One source close to Brandon Marshall texted: "Really appreciate Jets for giving him the opportunity and they did offer him an extension."

The news is hardly surprising, with the Jets rebuilding and Marshall appearing to be on the decline (but he certainly doesn’t think so; more on that later).

The move saves the Jets $7.5 million in cap space for the 2017 season, and continues their trend of releasing big-name veterans over the last week. Longtime Jets center Nick Mangold was released on Saturday (and found out while at Disney World), and cornerback — and four-time All-Pro– Darrelle Revis was released on Tuesday.

As ESPNs Rich Cimini explains, the Jets’ cuts this offseason have already cleared over $45 million in cap space:

Marshall, who turns 33 later this month, had 59 receptions for 788 yards and three touchdowns. It was his worst statistical season since his rookie year with the Denver Broncos. While the Jets’ quarterback play certainly didn’t help things for Marshall, he had a major issue with dropping passes and his big-play ability doesn’t appear to be where it was a few years ago.

So, Marshall is now a free-agent, and will be looking to join the fifth different team of his NFL career. But unlike the reasons that the Broncos, Miami Dolphins, and Chicago Bears chose to get rid of Marshall, the Jets’ release is assumed to be purely about football reasons and the current state of their franchise.

While it appears the six-time Pro Bowl selection may no longer be the superstar he used to be, he should still draw plenty of interest from contending teams that are looking for an upgrade at wide receiver.

Marshall still looked like a beast in 2015 with the Jets, reeling in 105 passes for 1,502 yards receiving and 14 touchdowns. Even if he can’t get close to that overall production again, his size — 6’4″, 230 pounds — makes him a very dangerous red-zone threat.

But Marshall certainly believes that he still can be great. He recently said on ESPN that he promises he’ll be a top-five receiver in 2017:

He seems rather confident he’ll bounce back next year.

“Last year was a down year for several reasons,” the Jets’ wideout said on ESPN’s First Take, “I’m not even in the top 30 (best receivers in NFL right now). I had 700-and-something yards.

“But this year, I promise you, I’ll be in the top five.