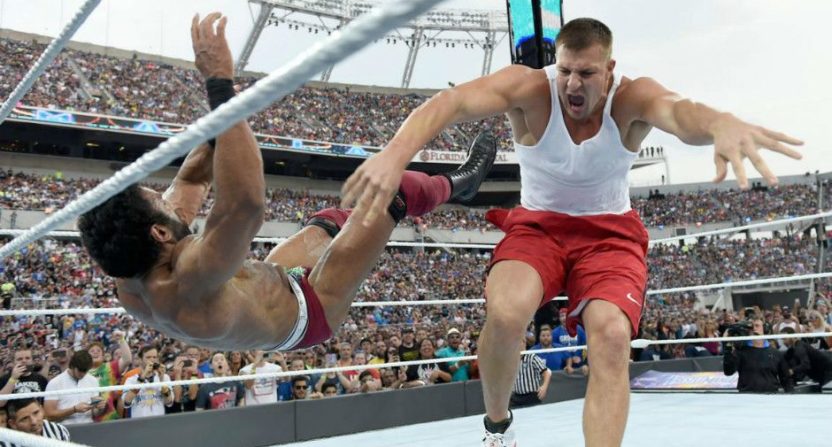 WWE recently brought Ronda Rousey on board, and the former MMA superstar will make her debut at WrestleMania. Now, WWE is looking to poach another star from the world of traditional sports, but this time it’d be a much bigger surprise.

Rob Gronkowski turns 29 in May, and when healthy, he’s been indisputably one of the most potent weapons in the NFL. A matchup nightmare, he’s helped extend Tom Brady’s career by being, well, gigantic, strong, fast, and possessing great hands. Off the field, though, he’s been, well, Gronk; his favorite number is 69, he loves to dance and party, and last year, he played a surprisingly active role in the Andre the Giant Memorial Battle Royal at WrestleMania.

Now, according to wrestling insider Dave Meltzer’s Wrestling Observer newsletter (transcribed here on Reddit), WWE is targeting Gronk, thinking they can convince him to give up football (and all the attendant long-term health risks) for a career in professional wrestling.

The talk of Gronkowski to WWE started just before the (Super Bowl). There was a report from Pro Football Talk’s Mike Florio that it wouldn’t shock him if Gronkowski retired after the Super Bowl. Then, after the game, when he was asked about the story, he said : “I don’t know how you heard that but I’m definitely going to look at my future for sure. I’m going to sit down the next couple weeks and see where I’m at.”

Gronkowski’s body has taken a lot of punishment, dating back to back surgery in college that led to him being a second round draft choice even though he was considered at the time one of the best athletes in that draft. Gronkowski suffered a concussion in the AFC championship game with Jacksonville but played in the Super Bowl. But he said the concussion was not a factor in how he was thinking. Gronkowski’s contract for next season is for $10 million, provided he meet certain criteria.

And as to how WWE comes in, Meltzer continued:

This comes at the same time that reports from wrestling indicate WWE is willing to offer a similar style deal to Gronkowski that they offered to Ronda Rousey. Given that would be making far less money than he would make in football, it’s hard to say, but he’s been hurt a lot in football and while wrestling full-time is very hard on the body as well, a part-time deal isn’t so bad. Gronkowski obviously likes wrestling, as he’s been at many WWE events when Rawley was there, including in developmental, and of course, was already part of one WrestleMania, which led to Rawley winning the Andre the Giant Battle Royal, and then they did nothing with him afterwards, so it was more a way to get Gronkowski and ESPN and mainstream sports coverage than to get one of their guys over to star level.

Mojo Rawley, who is one of Gronkowski’s best friends, led to more speculation in recent days when he told TMZ, “Are you kidding? It’s not a matter of if, it’s a matter of when, come on now. That was clearly done as a promo, and he quickly backtracked saying, “I don’t know. I can’t speak for him. Whatever he wants to do””.

It’s almost shocking to pause for a moment and realize that we’re now at a point where someone can reasonably suggest that between the NFL and professional wrestling, wrestling is the better bet for a longer, healthier life.

While it would certainly be a fascinating turn of events if Gronk did indeed abandon football in his prime, and doubly fascinating if he absconded for WWE, this entire debate hinges on one fairly outlandish idea: Gronk planning his life out more than a few weeks in advance.