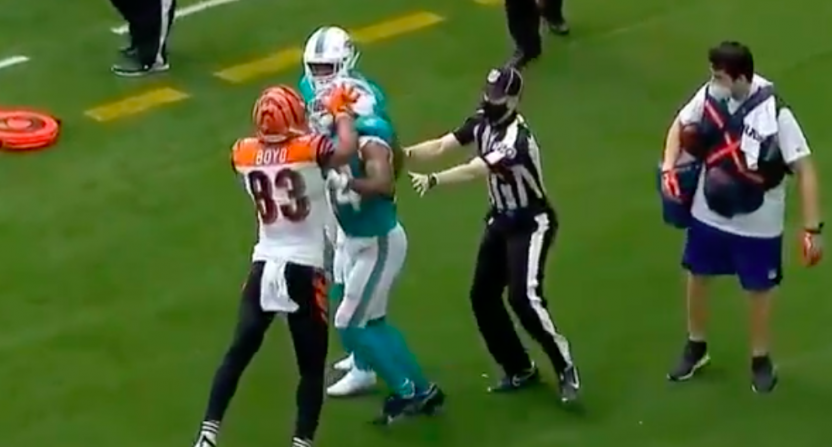 We’ve seen plenty of players get ejected from NFL games this season for good reasons, like making contact with a referee or purposefully hitting a quarterback in the head. We’ve also seen players get ejected over questionable things, like shoving. You can add another one of the latter to the list following the double ejection of Bengals wide receiver Tyler Boyd and Dolphins cornerback Xavien Howard on Sunday.

During the Bengals-Dolphins game, the two of them and Byron Jones became entangled on an incomplete pass play out of bounds. There was a little shoving by the Dolphins defenders that sent Howard to the ground. He then stood back and got in Howard’s face even though it seemed like Boyd might have given him the harsher shove. Regardless, the three got into a bit of a heated scuffle with some helmet grabbing and maybe one quasi-punch (but not really). But that was it.

If this is worth an ejection of both Tyler Boyd and Xavien Howard, football is in trouble #CINvsMIA pic.twitter.com/lKbLNl0NT0

For…reasons…Howard and Boyd were ejected. Weirdly, Jones was not.

Xavien Howard and Tyler Boyd were ejected for this… 🤔
pic.twitter.com/Y2ooWXF2Yd

Sure, there was a lot of pushing and shoving going on but hardly anything that constituted something beyond some unsportsmanlike conduct penalties. It didn’t seem as though any players made contact with the refs who came over to break up the ruckus and everyone walked away fine with nothing but grudges to carry them over.

Was the ejection meant as some kind of preemptive measure as the refs expected the two to come to blows the next time they lined up against one another? That wouldn’t be fair either. Regardless, it feels like a bit of a heavy hand for NFL officials and you can add ejections to the ever-growing list of things that don’t seem to have a clear definition when it comes to why they call them the way they do.

This was the kind of sideline scuffle NFL fans have seen a million times before without the need for any ejections, it’s hard to understand why this one was called for.