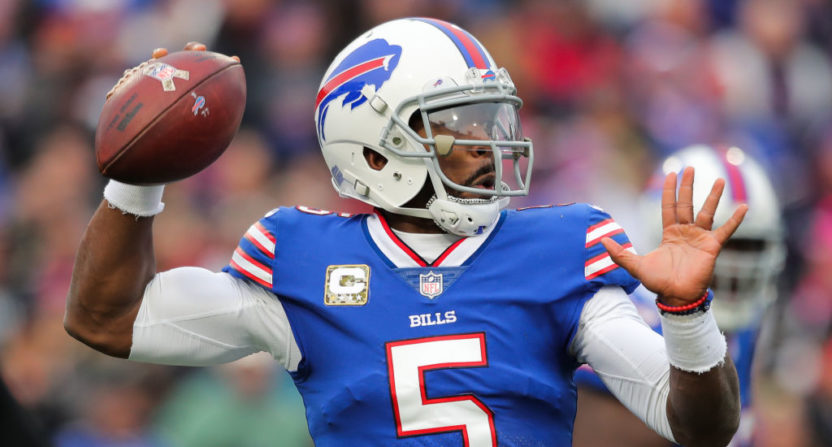 If you haven’t detected the sarcasm from the headline, please calm down. I’m not that insane and think the Buffalo Bills pulled off the move that will be the catalyst that turns things around the rest of the season.

To recap, because the Bills apparently feel the quarterback position is the problem, head coach Sean McDermott determined that he needed to bench starter Tyrod Taylor and play fifth round draft pick Nathan Peterman against the LA Chargers.

Head Coach Sean McDermott has announced that Nathan Peterman will start this Sunday at QB. pic.twitter.com/PS6BenGTrR

The Bills have been hovering just above the .500 mark all season but there was a different feel in Buffalo this season. The Bills were somewhat keeping up with the Patriots after the first part of the regular season and even though the Patriots got things back on track and the Bills lost to the Jets and Saints in consecutive weeks, they are still 5-4 and is one game up for the final playoff sport in the AFC. Considering that would be their first playoff appearance since 1999, you would think the Bills would see the signs of improvement and keep going.

But after two losses in a row, the powers that be in Buffalo seemed to have lost their minds and decide that of all the “problems” facing the Bills, it’s Tyrod Taylor’s fault.

Exactly why is it Tyrod Taylor’s fault the Bills are at a “terrible” 5-4 and are just two games behind the Patriots? Maybe I’m just some stupid blogger and don’t have the FOOTBAW experience like Sean McDermott has but I can’t for the life of me figure out any good reason why this is happening.

First off, this is nothing against Nathan Peterman. It’s not Peterman’s fault he’s getting this chance and if I’m him, I’m definitely not turning this down. And yeah, McDermott went 7/10 for 79 yards and a touchdown in garbage time of the blowout Saints loss but is ten passes really the basis of pulling the ripcord and changing quarterbacks midway through a potential playoff season?

And if you want to be even more outraged about this logical fallacy, look at what Taylor has done over the past three years. In his previous two full seasons as starting QB where he started in all but three games, Taylor had comparable stats, passing for just over 3,000 yards, an over 60% passing percentage and 37 total passing touchdowns. This in addition to rushing for over 500 yards per season and 10 total rushing touchdowns.

Sure, there are quarterbacks who can throw for more yards or throw more touchdowns. But given the Bills aren’t known for having the best, or even decent receiving corps, 3,000 yards passing per season isn’t that bad.

Just look at Taylor’s stats this season. Taylor hasn’t had a 300-yard game but he’s kept the Bills in games all season and only threw three interceptions this season. He’s not the flashy quarterback who’s going to throw bombs and light up the scoreboard but he doesn’t make mistakes either. And that’s what the Bills need right now.

In the Bills two consecutive losses, the Bills were outscored 81-31 against the 4-5 Jets and 7-2 Saints. Maybe the Jets result was bad but the Saints are in the midst of a seven-game winning streak and are with the Eagles as the favorites to go to the Super Bowl among NFC teams. And as far as I know, Tyrod Taylor doesn’t play defense so it’s not like it’s his fault the defense allowed 81 points (apart from his interception that led to a Saints touchdown).

I don’t know if Sean McDermott is panicking or he’s overthinking things but it’s the wrong decision. Maybe Peterman will be better and proves everyone wrong, but to do it at a time where your team still has a winning record and control your own destiny to make the playoffs for the first time this millennium, McDermott cannot possibly pick the worst time to make this move.