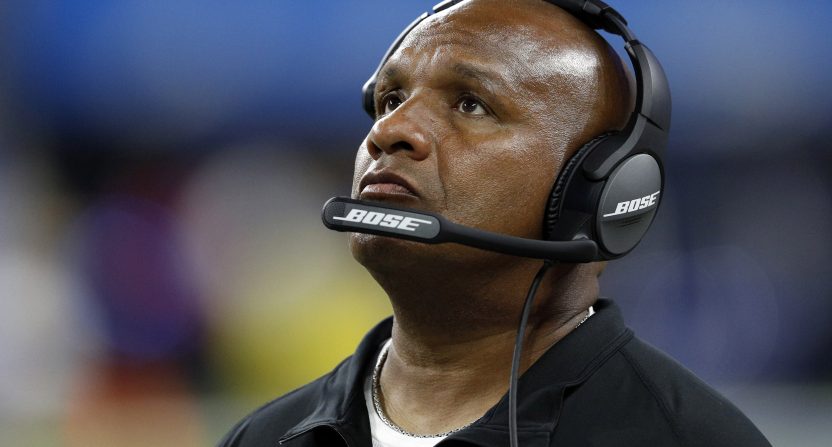 Mercifully, the Cleveland Browns finally brought an end to the Hue Jackson Era on Monday. It was an era that was definitively the low point of the post-expansion Browns of the 2000s, which is really saying something, like being the worst scene in Battlefield Earth.

The Hue Jackson Cleveland Browns were the lowest of the low and the worst of the worst. Somehow, Jackson made Eric Mangini look like Vince Lombardi, Romeo Crennel like Bill Belichick, and Mike Pettine like Bill Walsh.

We all know the numbers by heart by now. Jackson was a historically awful 1-31 in his first two seasons in Cleveland including only the second 0-16 season in NFL history last year. It’s actually quite amazing that Jackson doubled his win total with the Browns through just five games this year and yet he still got fired. Jackson won three games with the Browns. Three. One. Two. Three. You can find the entire list right here.

It’s extraordinary that after all the losing, it was of all things a public power struggle between Jackson and offensive coordinator Todd Haley that was the final straw for both of them as they were both fired on Monday. Thankfully, Baker Mayfield will be able to start fresh next season with a (hopefully) competent head coach and not someone like the Browns have been hiring since the turn of the century.

But we can’t leave this important moment in NFL history without paying tribute to Hue Jackson, who yes, is the worst head coach in NFL history. The evidence is too much to overcome – Jackson’s .205 winning percentage is the second-worst in NFL history among qualified coaches, he had only the second 0-16 season in history, and he incredibly never won a road game with the Browns. Before we get to Jackson though, here are a few other candidates who could contend for that prestigious title:

* Rich Kotite & Bruce Coslet – These two names from the mid-90s are likely to come up on a lot of these internet listicles. And while both were in charge of some pretty, pretty bad teams, both had one thing that a lot of NFL coaches can never put on their resume – a playoff appearance. Kotite made the playoffs his second year with the Eagles, but everyone probably remembers his 4-28 reign with the Jets. Likewise, Coslet made the playoffs in his second year with the Jets before ultimately seeing his career go into a nosedive with the Bengals.

* Dave Shula – Dave Shula was slightly less successful than his father Don, one of the best coaches in NFL history. Shula coached the Bengals for five seasons in the mid-90s and went 19-52. Yes, it was worse before Marvin Lewis came along.

* Steve Spagnuolo – Spags coached three seasons with the Rams and notched a 2-win and 1-win season on his belt in that timeframe. He has an 11-41 career record as a head coach but had much more success as defensive coordinator of the New York Giants where he won a Super Bowl.

* Gus Bradley – He coached the Jaguars for four seasons from 2013-2016 and had 10+ losses in every single one of them. At least he was consistent.

* Marty Mornhinweg – Mornhinweg went 5-27 in two seasons in charge of the Lions. At least Hue Jackson never took the wind in overtime.

* Rod Marinelli – Jackson’s only compatriot in the 0-16 club, Marinelli at least had a 7-9 season with the Lions before putting up a bagel in 2008.

* Bert Bell – The only NFL head coach with a worse winning percentage than Jackson went 10-44-2 as head coach of the Philadelphia Eagles. That record comes with a caveat as Bell also owned the team. As bad as Bell’s record was as a coach, though, his NFL legacy is secure. Bell later became commissioner of the NFL, was elected to the Hall of Fame, and was instrumental in ideas like the NFL Draft that helped lay the foundation for the league to become the most popular sport in the land.

So what makes Jackson stand out above the crowd? It wasn’t just that he lost, it was how he lost. A silly spat with an assistant coach is as fitting an end as one could imagine for Jackson’s tenure with the Browns. Jackson never seemed to take responsibility for what was going on in Cleveland, always finding someone to pass the buck to in an effort to explain away the losses and never having his players’ backs.

For instance, after Isaiah Crowell ran for a 59 yard touchdown in a game in late 2017, Jackson somehow found a way to turn even a good play into a controversy by slighting Crowell. But that was nothing compared to how Jackson continually mismanaged his quarterbacks, which was ironic given that was supposed to be his strength. Jackson cycled through seven different quarterbacks in less than two-and-a-half seasons in Cleveland – Cody Kessler, Josh McCown, Robert Griffin III, DeShone Kizer, Kevin Hogan, Tyrod Taylor, and Baker Mayfield all started games under Jackson.

Jackson never had a plan for any of these quarterbacks, constantly flip-flopping on what direction he was going. One week it was a developmental project, the next week Jackson was committed to winning now. Specifically, Jackson’s treatment of DeShone Kizer during the 2017 season should be shown to every single head coach on how not to handle a quarterback.

Jackson benched Kizer multiple times throughout the season and completely wrecked the confidence of a young quarterback playing for a rebuilding team. Jackson named Kizer his starting quarterback in Week 1 as a rookie and then benched him after just five games. One week Jackson would defend Kizer by saying he still believed he had a “bright future,” and then another week Jackson publicly criticized his protege and wondered if he would ever “get it.”

That’s why it was almost inconceivable that Jackson was allowed to return for 2018 and work with Baker Mayfield. Jackson took the opposite strategy with Mayfield, choosing to sit him behind a pedestrian Tyrod Taylor to start the 2018 season. Then, when Mayfield came in due to Taylor’s injury and led the Browns to just the second win of Jackson’s career in Cleveland, Jackson infamously said he’d have to “watch the tape” before committing to the former Heisman winner.

The only person Jackson really had a high opinion of during his time in Cleveland? Himself. After going down in the history books at 0-16, Jackson ended the 2017 season by delivering what will stand as the seminal moment of his Browns career when he threw his own name into the hat for the NFL Coach of the Year.

“I don’t think anybody else could’ve did this job,” Jackson said in a press conference after his team’s 28-24 loss to the Pittsburgh Steelers. “I don’t think anybody else could’ve stayed in this job for two years and been 1-31. A lot of coaches would’ve said ‘uncle’ after last year. I know that. I think you guys do, too. I think a lot of coaches during this year would’ve said, ‘Forget it.’

Nobody expected the Browns to be good the last two years, but 1-31 was taking it to the extreme. And as Cleveland has shown so far this year, there’s enough talent there right now to actually build a winner. With the Browns in contention in game after game, it finally became crystal clear that it was the coaching truly holding this team back. Ultimately, Jackson was probably right about one thing. Nobody else could’ve done the job that he did in Cleveland, but not for the reason that he thinks.