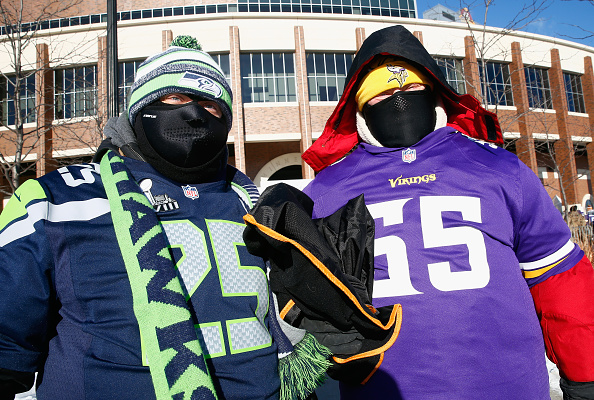 It’s so cold in Minneapolis today for the NFC Wild Card matchup between the Minnesota Vikings and Seattle Seahawks.

How cold is it?

I’ll tell ya, I had to stick my head in the freezer for five minutes just to warm up, that’s how cold it is.

No, but seriously, it’s pretty darn cold in Minnesota today and the Vikings and Seahawks are going to be playing in one of the coldest games in NFL history.

According to AccuWeather, kickoff temperature for today's Seahawks-Vikings game is -1º.

The players, of course, are preparing for the elements…

.@stefon_diggs is locked in for his first playoff game. #ForgeAhead pic.twitter.com/v2nXboVMNa

Some members of the Seahawks warmed up in shorts, which is insane.

There are Seahawks people on the field running around in shorts. Insane. I can't identify him because he has a ski mask on.

Seahawks warming up in shorts at -11 degrees
Live reports from #SEAvsMIN @KING5Seattle Morning News is on pic.twitter.com/4ctjg6NVov

Garry Gilliam of the Seahawks actually had frost on his eyelashes before the game.

The temperatures actually broke the Vikings’ Gjallarhorn, but it was replaced.

The #Vikings #Gjallarhorn is shattered from the cold temps before today's #SEAvsMIN game. pic.twitter.com/0MceMuekPl

The 2009 version is 1-0 in the playoffs. #ForgeAhead pic.twitter.com/f6WybnHXXL

The Vikings are also handing out window scrapers in the press box, which isn’t something you see every day.

The Vikings are handing out window scrapers in the press box. So, yeah, cold.

According to The Weather Channel, a kickoff temperature of -1º would not crack the top five coldest games in NFL history…

Going to the #NFLPlayoffs game? Keep your shirts on or risk #hypothermia, @Vikings warn https://t.co/tEkb4Jk9v9 pic.twitter.com/jYzCeQGrGN

Of course, the cold weather does have another issue to be concerned with.

Apparently the NFL is concerned that the Minnesota cold will make the footballs go below 12psi. Seems like a reasonable explanation…

Oh no. We’re not going to go through *this* again, are we?