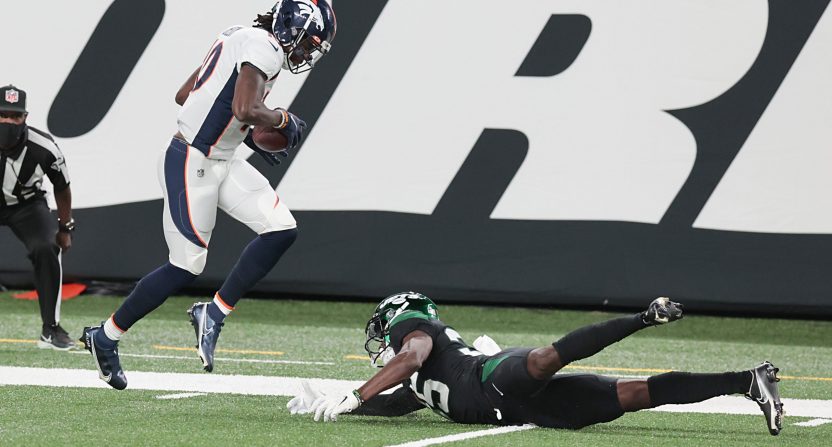 The Denver Broncos and New York Jets played in a Week 4 game that already has bigger Trevor Lawrence ramifications than it does anything else. Each team entered winless, and it’s easy to see the loser remaining winless for the duration of the 2020 season. The Broncos came away with a 37-28 victory over the Jets, who are now 0-4.

Stay for the Sam Darnold reaction at the end. pic.twitter.com/dncZ9sT2hk

The Jets were even favored by one point against a very bad Broncos team that has been decimated by injuries. 2019 undrafted free agent Brett Rypien made his first career NFL start for Denver at quarterback. And the Jets still allowed 37 points.

This should've probably been an interception, but we're talking the Jets here. Jerry Jeudy — the No. 15 overall pick this year — with the Broncos touchdown. pic.twitter.com/clfgqQa5E9

On the surface, this looked like the easiest game remaining on the Jets’ schedule, and potentially by quite a bit. Additionally, it’s easy to see this whole thing just spiraling out of control for the Jets (like in the locker room too), with the product on the field only getting worse.

Here’s a look at the Jets’ remaining schedule:

The NFL really is a week-to-week league, and the competition tends to be so close where some fluky bounces or special teams plays could easily be the difference.

But the competition really *isn’t* that close — at least when the opposition’s starting quarterback is healthy — in many of these Jets games; they’re going to be double-digit underdogs several times (the Chiefs should probably be favored by four touchdowns).

The two Dolphins games should be winnable for anybody, but those will still be very tough games for the Jets- and they certainly would have very little chance against the Fitzmagic that we saw from Miami last Thursday night. The Chargers — currently starting rookie quarterback Justin Herbert — should also be a winnable game for any team, but the Jets will surely be underdogs by many points in Los Angeles (where the Chargers only lost to the Chiefs by three points in Week 2). The Browns or Raiders? They’re both 2-1 and significantly more talented than the Jets.

Now, while there’s no longer a single favorable game, odds are still that the Jets find a way to win at least one of these games, even if accidentally. Maybe a few fumbles fall into their lap, maybe Sam Darnold actually puts it together a full game instead of the occasional flash (though, to be fair- he isn’t getting any help at all so far, particularly from his offensive line), etc. However, it’s entirely possible that they *don’t* win any of these games, and regardless of the win column, things figure to get worse before they get better for this team in 2020.

So, don’t be surprised if the Jets become the first team since the 2017 Browns to go 0-16. Jets fans would certainly be quite fine with that, because it would assure the opportunity to draft a generational prospect in Trevor Lawrence to play quarterback for whatever coach replaces Adam Gase (who may be fired by the time you read this).