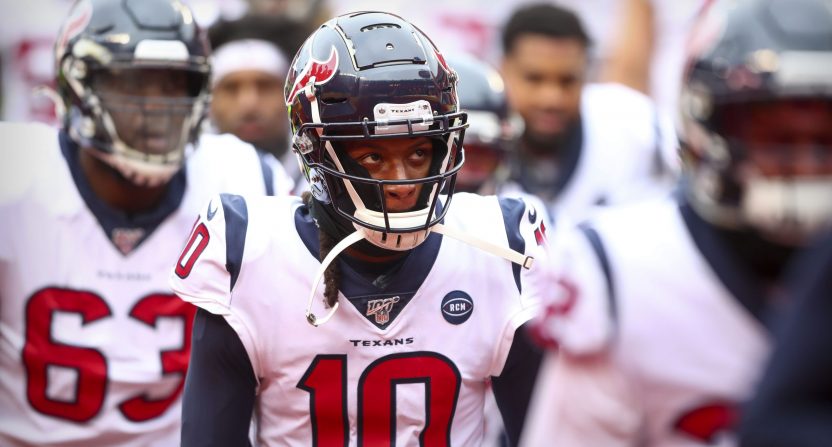 The NFL offseason is in full swing and my goodness, the moves are getting wild.

It’s being reported that the Arizona Cardinals are trading running back David Johnson to the Houston Texans for wide receiver DeAndre Hopkins. Yeah, you read that right. Some picks are going to be switching hands, according to Houston Chronicle’s John McClain but the important factors on the trade is Johnson for Hopkins.

David Johnson is good but he has only played two full seasons in his five years with the Cardinals and was put in a reduced role with the Cardinals last season. The Texans have Carlos Hyde, who understandably isn’t as good but he at least broke 1,000 yards last year. In a league that’s more and more about the passing game, why is it worth beefing up the running back position at the expense of your top wide receiver?

Having said that, the Cardinals clearly got themselves on the better end of this deal. Kenyan Drake now steps in as running back, something he had been doing the last half of the season and they got one of the top wideout’s in the NFL. Social media response has been what you would expect, a mix of befuddlement to people openly making fun of the Texans.

Yooooo finally. We got a whole ass armed robbery😂😂😂😂😂😂

Every team should be on the phone trying to steal all of the Texans players. Might be able to get JJ Watt for some toilet paper

Twitter: The Texans are trading for David Johnson and taking on his entire salary.

Me: Oh. Weird. The Cardinals must be throwing in something good to make that happen.

Twitter: Actually, the Texans are sending DeAndre Hopkins to the Cardinals… pic.twitter.com/GoIPNWwMkF

Bill O'Brien #Texans: How bout we trade you DeAndre Hopkins for your 2nd string RB AND we'll eat his $100M contract?

What's next? Texans trade J.J. Watt for Mitch Trubisky and a deep-dish pizza?

A year ago, Hopkins & Clowney were two of the Texans four best players. They are both now gone (along with a ’19 4th round pick) for:

The Cardinals have DEANDRE HOPKINS.
The Texans are paying David Johnsons salary.

This is the best day of my life.