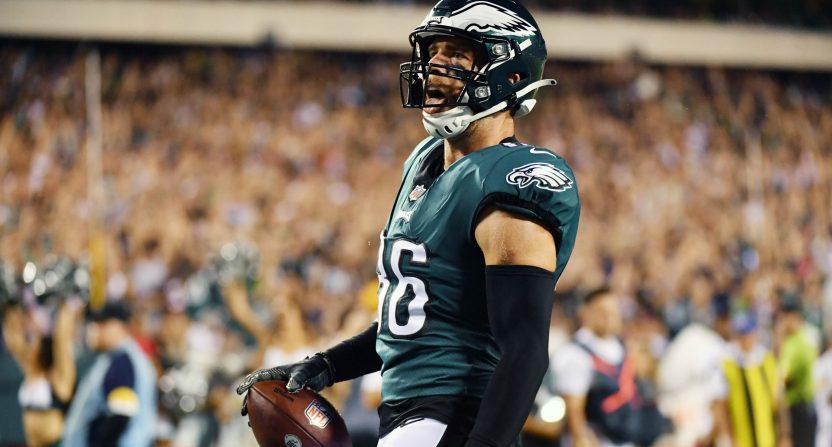 On Friday, the PhiladelphiaEagles finally traded tight end Zach Ertz to the Arizona Cardinals for cornerback Tay Gowan and a 2022 fifth-round draft pick. The decision, which has been in the works for a long time, is a culmination of a process that began last year when the two sides were unable to come to a contract extension agreement.

Ertz has played his entire career in Philadelphia since 2013, garnering 579 passes for 6,267 yards and 38 touchdowns. He also caught the game-winning touchdown in Super Bowl LII, making him a hero in Philadelphia no matter what else happens in his career.

Ertz spoke with the media following the announcement before heading out of town to join the Cardinals. During the presser, he was asked about what it meant to him to play in Philadelphia and play for the local fans. His answer is one that is only going to endear him to the Philly faithful that much more.

In one response, Zach Ertz captures the key difference between those who succeed and are accepted in Philadelphia, and those who flame out. pic.twitter.com/g2sGK9wgS8

“I think a lot of young players struggle with this,” said Ertz. “You’re told for so long how good you are. In high school, coming out, pretty good player, big-time recruit, you’ve got college coaches telling you how good you are. Get to college, you’re not great early in your career, get to that point in your college career everyone is telling you how great you are. And you kinda sorta expect it, in society today, a lot of people want to be told how good they are. And it’s just not the case. It’s not reality.

“It’s okay to be told that you’re not playing great. It’s okay to be told that you need to be better. And in reality, no one should have to tell you that as a professional athlete. I could tell myself that I played well if I didn’t play well. I could tell you exactly how the fans are gonna react based on how I played. So for me, it’s just what it is. You can’t take it for more than what it is.

“These people love their team. They love their Eagles. They love their players. This city loves their players. And they wanna see us succeed as much if not more than we want to succeed. And so for me, it’s what I loved about this place. People are honest. They’re blunt. They don’t care about your apology on a game on social media if you played poorly. They want to see you put in the work Monday through Saturday to get better for Sunday. And for me, I think that’s why I resonated with this city. It’s cause all I knew was that. For work hard. And that’s why I love this place.”

Whether he meant to or not, the first part of Ertz’s speech certainly feels like it’s directed at Ben Simmons, who is currently pushing to leave the 76ers after a disastrous performance in last year’s playoffs. The criticism that Simmons received following last season appears to have played a major role in his desire to play elsewhere.

And clearly, lots of other people on social media saw the parallels as well.

After an entire offseason of Sixers-related discourse about Philly fans, Zach Ertz just ended it in 90 seconds. https://t.co/NHJvwqflOP