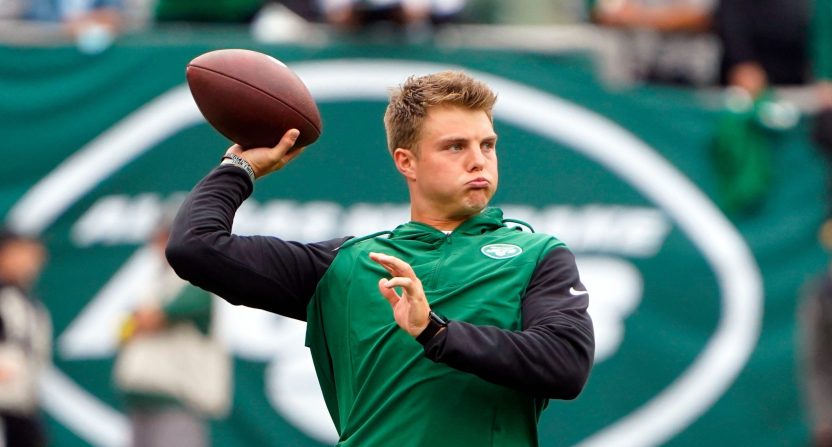 One of the strangest topics in sports is “the yips,” where pro athletes suddenly have trouble making plays that used to be relatively routine for them. From Chuck Knoblauch’s throwing errors through Rick Ankiel‘s inability to get a pitch over the plate through Markelle Fultz‘s free throws, we’ve seen this a lot. And while there’s been a lot of research into everything from mental struggles to biomechanical challenges, a comprehensive cure for “the yips” (if it even is one overall thing rather than a number of distinct things categorized together) has not been found yet. This most recently came up with newly-benched New York Jets’ quarterback Zach Wilson, with NFL Network’s Ian Rapoport offering more on that Thursday morning:

From @GMFB: The yips, the benching and all that went into the #Jets starting QB Mike White this weekend. pic.twitter.com/NynAh0q196

The most notable part of what Rapoport says there starts around 0:25: “Guys, this is something that has gone back way before this year. I was talking to people watching Zach Wilson do the OTAs, do the minicamps, and they felt that something was wrong. The belief was that he had the yips; couldn’t make simple throws, couldn’t have base mechanics, something was just wrong. And the Jets brought in John Beck, his quarterback coach, who’s really one of the best in the entire country.”

“But things really weren’t getting better. They tried to fight through it. He had an injury during training camp, that did not help at all. They put him out there, everyone tried to do his best, it was not right. And Robert Saleh owed it to his locker room to keep doing the best thing that he could do to have this football team win, it was not to have Zach Wilson at quarterback. So Mike White now starts for the Jets this weekend, and I would expect going forward.”

Rapoport also talked about this on NFL Network Wednesday night, and there, Sports Illustrated‘s Albert Breer quote-tweeted it with a link to an article he’d previously written about the “yips” battles that Wilson (seen above on Sept. 25) last year:

Jets QB Zach Wilson's issues actually go all the way back to last year—he had a case of the yips that caused the team to delay his return from a PCL injury and hire John Beck last fall. In our 6.20 MMQB (https://t.co/BzimKLjNcs), we detailed what the coaches did to combat that. https://t.co/7ytusb2Bza pic.twitter.com/Y92XCzAfQ7

Here’s part of that article, which is also notable for its discussion of the complex mental work for a quarterback in the Jets’ offense (run by offensive coordinator Mike LaFleur and QBs coach Rob Calabrese, but inspired by their work under current San Francisco 49ers head coach Kyle Shanahan):

Nationally, there hasn’t been much talk about where the Jets quarterback is headed after a tumultuous rookie year. But having asked about Wilson, if I were a fan, I’d feel pretty good about the spot he’s in, mostly because of how far he’s come after, in midseason of last year, incurring what might best be described as a case of the yips. It’s why the team brought in his personal throwing coach, John Beck. The fact was Wilson had too much going through his head, and that was apparent almost right away.

…The Shanahan system, the coaches have emphasized to Wilson, has answers for him that don’t require him to worry as much about the other team, and [backup QB Joe] Flacco has reminded him that very few quarterbacks (e.g. Peyton Manning, Tom Brady) have full command of everything happening out there. And none of those quarterbacks, Flacco’s advice goes, had it in their second year. Which, really, cuts to the heart of all of this for the Jets—all they’re trying to do now is have him be the best 22-year-old quarterback he can be. “Last year, he worked his ass off,” one staffer said. “But he tried to learn so much so fast, and that’s probably where we failed him.”

Breer’s article is notable for showing off the mental side of this. Being a NFL quarterback is difficult enough under any circumstances, but likely tougher still when coming into a complicated scheme quite different from what you ran in college. And with many of the past cases of “the yips,” the mental side has been a big part of the discussion.

It does sound like the Jets have been doing what they can do to support Wilson, from bringing in his personal coach in Beck (also a former BYU QB, and someone who played in the NFL for Washington and the CFL for BC, and has since gone on to quite the renown as a personal quarterbacks coach and trainer) to simplifying the offense and repeating various concepts. But even with all that, “the yips” have remained on some level. And it will be interesting to see if Wilson is ever able to work his way back.