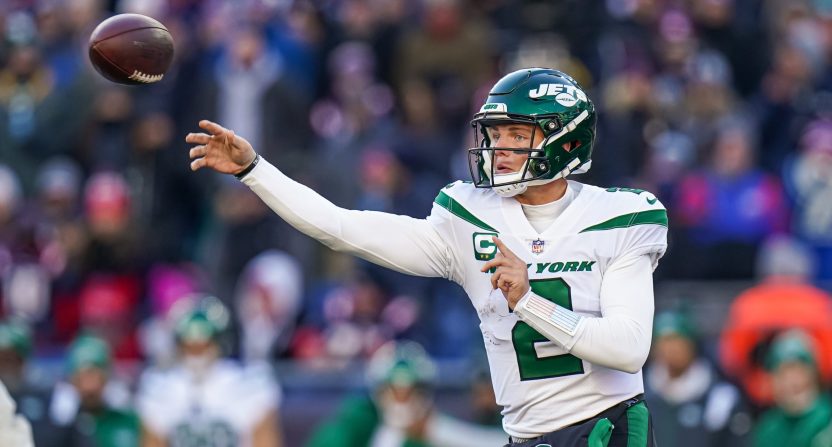 Defensively, the New York Jets were stellar in Week 11’s game against the New England Patriots. They still lost the game, when New England’s Marcus Jones scored on an 84-yard punt return, breaking a 3-3 tie in the final seconds. And in fairness to New York’s punting team, it might have been exhausted from overuse by that point of the game thanks to the struggles of the Jets offense and specifically, quarterback Zach Wilson.

Jones’ return came on New York’s 10th punt of the day. Wilson has had his share of struggles in 2022 but Sunday may have been the nadir. While he didn’t turn the ball over, Wilson finished the game with only 77 passing yards. And it wasn’t as though the Jets weren’t letting him throw. He attempted 22 passes in the game and completed only nine of them.

Football fans were highly critical of the performance from the second selection of the 2021 NFL Draft.

Zach Wilson just has no clue what he's doing out there. It's hard to watch.

That's just not good enough. Period. There is zero excuse for that.

You don't have to be in the building to know that's terrible. #Jets

Zach Wilson should've had like 2-3 INTs today but they got dropped time after time.

I don't care what the Jets have to do in the offseason to get a quarterback. You do it

This defense is legit. Zach Wilson is legitimately worse than some backups. The Jets would be a Super Bowl contender with even an average QB back there

The loss is whatever at this point. I think the bigger takeaway is about Zach Wilson.

Through 1.5 years in his career, he’s done nothing to show he has what it takes.

He’s holding back the #Jets. He’s not the only reason the offense was bad today, but he was a huge part of it.

I'm not sure Zach Wilson is even a decent backup QB

The good news for Wilson is that even after Sunday’s loss, he’s 5-2 as a starter in 2022. His performance, though, has been subpar.

On the season, Wilson has completed only 55.6% of his passes for 1,279 yards with four interceptions, five touchdowns and a 72.6 passer rating. He did run more on Sunday than he has in the previous games. Wilson’s 26 yards rushing exceeded his season total of 21 coming into the game. That was perhaps the only bright spot in what was an otherwise miserable outing.